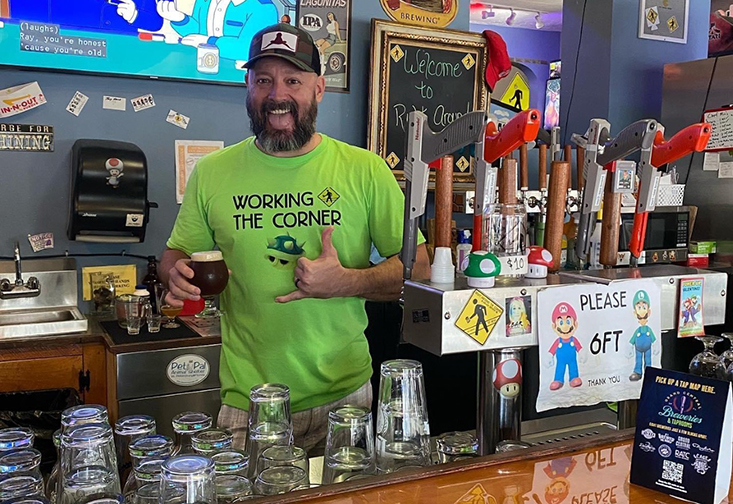 Army veteran and previous scholarship winner Ken Shere started as an apprentice at Right Around the Corner brewery (above) in St. Petersburg and was recently hired as the head brewer at a brewery opening soon in Pinellas Park.

Military veterans looking to take their brewing skills to the next level can now apply for the Yuengling Veteran Scholarship. The $5,000 award provides one veteran with full funding to attend USF's Brewing Arts program on the St. Petersburg campus. Applications for the August 2022 session are being accepted through July 1, 2022.

Being a past recipient of the scholarship helped Ken Shere realize his passion for brewing beer after spending 20 years in the U.S. Army. He retired from active duty in 2018 and struggled with what to do for a second career.

"Getting out of the military was way harder than I expected," Shere said. “So many of us guys who are lifers in the military don't realize how institutionalized we are in the military and how little we know about civilian life. It's a whole different lifestyle."

Shere said the people he met after retiring from the Army encouraged him to pursue his home brewing hobby as a career. He often visited Right Around the Corner brewery in St. Petersburg, where he got his first job as an apprentice and eventually became an assistant brewer. That's where he was encouraged to sign up for the Brewing Arts program.

"The brewing industry attracts many active military and veterans," said Jennifer Sedillo, director of USF's Brewing Arts program. "I think the camaraderie and the working together to reach the same goal makes the brewing industry a good fit for those who served in the military and we are happy that we can provide the training to help veterans in their second career."

The Brewing Arts program, a collaboration between USF's College of Arts and Sciences and several local and national breweries, is taught by professionals and academics in the field. It's followed by hands-on training in a brewery to apply the knowledge learned. Among the nearly 20 breweries participating in the program is D.G. Yuengling & Son, Inc., which sponsors a veteran and diversity scholarship each year.

“Yuengling has always been a proud supporter of the dedicated men and women who have served our country. We are pleased to carry on that tradition by sponsoring the Yuengling Veteran's Scholarship at USF again this year,” said Wendy Yuengling, Chief Administrative Officer and sixth-generation family member, D.G. Yuengling & Son, Inc. “As four women helping to lead America’s Oldest Brewery, my sisters and I understand the importance of shaping opportunities for individuals who want to pursue their passions in brewing. We’re raising our glasses to a more inclusive brewing industry and are proud to help support the development of the next generation of diverse brewers.”

Shere graduated from the program in 2021. Sedillo stays in contact with many of the program's graduates and recently asked Shere to attend the Florida Brewers Guild conference. That's where he met the owner of Pee-Pa's Garage Craft Brewery, who offered him a job as head brewer.

The craft brewery is expected to open soon in Pinellas Park.

"Without the program, I wouldn't be where I am right now. Because Dr. Sedillo asked me to come to the Brewers Guild conference, I would have never met the owner of Pee-Pa's. The program directly related to me getting hired,” Shere said. "So, because of this program, I have a new passion in my life."