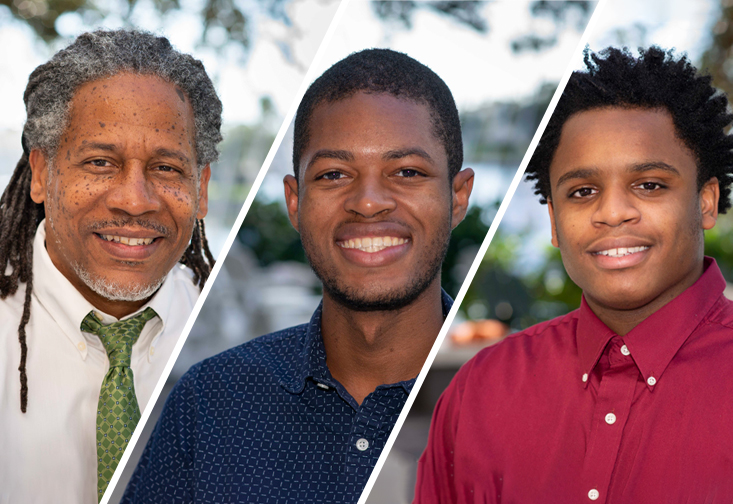 On November 9, the USF College of Education officially welcomed its first group of students who have committed to becoming teachers at schools in Pinellas County.

The students are the first cohort for USF’s Call Me MISTER program, which stands for Mentors Instructing Students Toward Effective Role Models, and aims to increase the number of male teachers of color in elementary schools with large populations of poor or at-risk students.

In January 2021, USF’s St. Petersburg campus partnered with Pinellas County Schools to develop the program that puts black or brown male teachers in classrooms where they can be mentors. The two institutions worked together to identify prospective applicants like Juan Dacosta, who grew up in the St. Petersburg area.

“Because I went to school in Pinellas County for 12 years, I understood the premise of the whole program and why it’s necessary and important,” Dacosta said.

As a graduate student, Dacosta has a master’s degree in business administration and is now pursuing a master’s in education. “For me, without thought, I had to do it because it allows me to give something back to the community.” 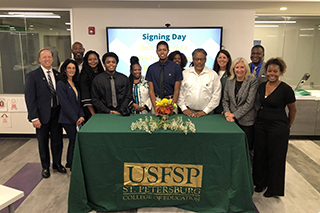 The Call me MISTER cohort for 2021-2022 includes Dacosta and two undergraduate students, Michael Wright and Triston Williams. During a ceremony, these students signed commitment letters at the USF St. Petersburg campus, where the program is housed. The ceremony symbolized their commitment to urban school teaching and the Call Me MISTER program’s mission and values, including confidence, dignity, discipline and self-respect.

“The commitment isn’t a one-way street. It’s very much reciprocal,” said Brenda Walker, the program’s director and professor in exceptional student education at the USF Tampa campus. “You have the unwavering support; you have the commitment and the investment of multiple USF individuals and our partners at Pinellas County Schools,” she said at the event.

Walker is the former associate dean of education at USF’s St. Petersburg campus and played a crucial role in securing the coveted Call Me MISTER license.

Founded and based at Clemson University, the innovative program has spread to more than 25 colleges and universities nationwide. USF is the only university to hold a license for the Call Me MISTER program in Florida.

Students enrolled in the program receive tuition assistance for approved areas of study, an academic support system to help assure success, social and cultural support, assistance with job placement and the opportunity to attend a national summer conference with all the Call Me MISTER participants.

In exchange, graduates agree to teach in urban or low-income elementary school classrooms – at least one year for every year they receive assistance from the program.

“It’s a calling as a public servant. It’s an opportunity to give back to society,” said Sandra Vernon-Jackson, coordinator of the Call Me MISTER program and instructor of mathematics education at the USF St. Petersburg campus. “When it comes to education, we’ve been losing individuals. There’s a low rate of men going into the teaching profession.”

According to the National Center for Education Statistics, since 2014, ethnic and racial minorities have made up more than half of the student population in U.S. public schools. But about 80 percent of teachers are white, and 77 percent are female. People of color make up about 20 percent of teachers, and just two percent are Black men. Research from the Institute of Labor Economics also shows that the drop-out rate for very low-income black youth decreased by 39 percent by having at least one black teacher in elementary school.

“I’ve always had the desire to leave a positive impact on those around me and be a mentor to someone. The program provides that and assists me in the process of becoming a teacher, which is a field that lacks diversity,” Williams said, one of the students in the cohort.

The Call Me MISTER program, including the student’s tuition, is entirely funded by private donors. USF hopes to increase the number of students and expand the program to its campuses in Tampa and Sarasota-Manatee.

“I’ve never had a male teacher of color, so I believe expanding this underrepresented group will inspire children and teach them that someone who looks like them can work in a highly-respected profession,” said Wright, another student in the cohort. “As I go through the program, I hope to learn how to be an amazing educator and leave an everlasting impression with the students I encounter.”