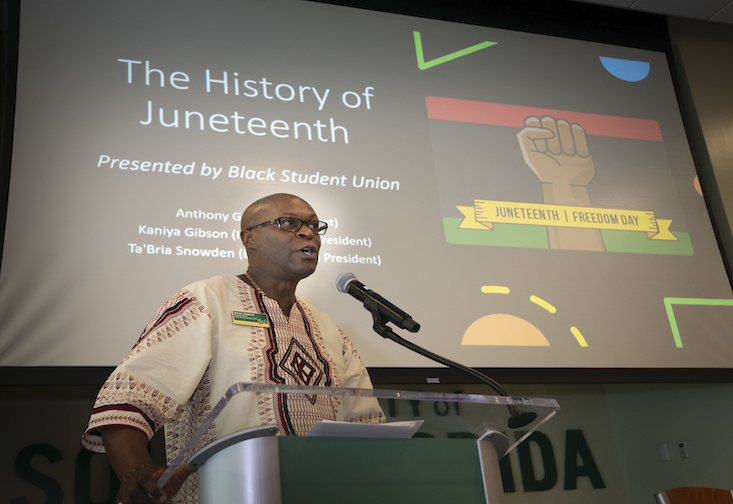 Darren Gambrell, assistant director of student services in the Office of Multicultural Affairs on the USF Sarasota-Manatee campus, served as the emcee for the Juneteenth celebration.

Celebrated by African Americans since the late 1800s, Juneteenth has become the most well-known commemoration for the ending of slavery in the United States. Last year, it was established as a federal holiday.

On Friday, June 17, USF’s Office of Multicultural Affairs commemorated Juneteenth on the St. Petersburg campus, bringing together the community to shed light on the holiday’s complicated history, discuss current racial justice issues and celebrate through artistic performances. Music, great food and a joyous atmosphere added to the festivity.

The goal, said event organizers, was to raise awareness about the nation’s newest national holiday.

“For me personally, it is important to put on this celebration because I just learned about Juneteenth a few years ago, and I’m sure that is true of many others in our community,” said Dewayne Anderson, assistant program director of the Office of Multicultural Affairs on the St. Petersburg campus. “The fact that I didn’t learn about it until I was in my 20s is the reason why we need to celebrate. It is an extremely important landmark in black history.”

“We are getting a day off, now that it is a federal holiday, but why are we getting that day off? Understanding why is really what this event is about,” said Johanna Heule, assistant director of programming for the Office of Multicultural Affairs on the Tampa campus.

Dating back to 1865, Juneteenth commemorates the day when 250,000 slaves in the state of Texas, which became the last bastion for slavery during the final days of the Civil War, were declared free by the U.S. Army. As soon as the following year, local festivities were organized in African American communities to celebrate and remember the significance of that day, June 19. The celebrations continued year after year. 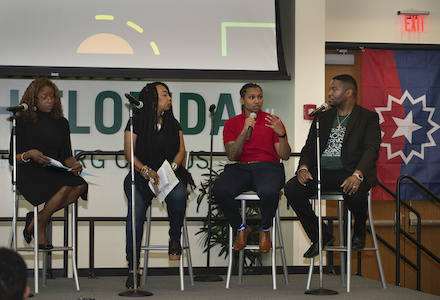 A panel discussion featuring (from left to right) Michelle Madden, campus diversity officer for the St. Petersburg campus; Geveryl Robinson, a USF assistant professor & vice president to the Black Faculty & Staff Association; Pilar Walker, coordinator for Black student success for the Office of Multicultural Affairs; and Walter Jennings, assistant director of diversity initiatives for the USF Foundation, covered what Juneteenth means to them, why it matters today and the significance of it becoming a national holiday.

In the 20th century, as African Americans from Texas and neighboring states spread throughout the country, so too did Juneteenth celebrations. In 1980, Texas became the first to make it a state holiday. Shortly thereafter, other states followed suit, along with organizations and businesses across the nation hosting events and educational opportunities dedicated to commemorating the significance of this day.

As cited in the presidential proclamation declaring it a national holiday, the celebration of Juneteenth is important because it raises awareness about the country’s tragic history of slavery and acts as a marker for how far the nation has come and how far it still has to go in the realm of race relations and justice.

“The expression, ‘I am my ancestors wildest dreams.’ That means even when your ancestors were not being thought of, they thought of you and the promise that you hold,” said Michelle Madden, campus diversity officer for the St. Petersburg campus during the Juneteenth event. “When your ancestors were being discounted, they counted on you. They survived so you could thrive. So, what are you going to do now that you are here in this space, in this time, in this place.”

At the USF event, students Anthony Goden, Ta’Bria Snowden and Kaniya Gibson, the president, external vice president and internal vice president of USF’s Black Student Union, presented on the history and other key educational aspects of Juneteenth. This was followed by a panel discussion featuring Madden; Walter Jennings, assistant director of diversity initiatives for the USF Foundation; Geveryl Robinson, a USF assistant professor & vice president to the Black Faculty & Staff Association; and Pilar Walker, coordinator for Black student success for the Office of Multicultural Affairs. Each touched on what Juneteenth means to them, why it matters today and the significance of it becoming a national holiday.

“One of the things that Juneteenth really represents for African Americans is the pursuit and journey of what it means to be free,” said Jennings. “Many of us grew up celebrating the 4th of July, a holiday that didn’t necessarily represent freedom and liberation for us. So, in a lot of ways, Juneteenth is our 4th of July. It’s the beginning of a process of what does freedom look like for us in this country and how do we walk in that.”

The festivities concluded with students taking to the stage, performing songs and poetry. Around 70 people attended or tuned in remotely to the event, which is one of many celebrations of Juneteenth happening throughout the Tampa Bay region all week long. Earlier in the week, about 30 USF Sarasota-Manatee faculty, students and staff took part in multicultural arts-integrated instruction by shedding their shoes for informative lessons on African, percussive and tap dance in order to commemorate the holiday.

“After celebrating at USF, be part of the other programming and get involved with what is happening around the community,” Heule said.

A full list of local Juneteenth events can be found here.