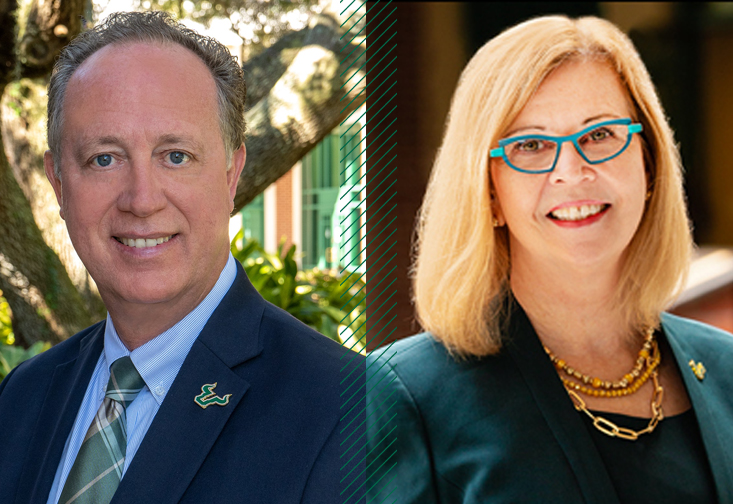 E. Howard Rutherford (left) is the new associate vice president of development and Theresa (Terry) Chisolm (right) will serve as senior special assistant to the regional chancellor for academic consolidation.

Theresa (Terry) Chisolm, who has been the vice provost of strategic planning, performance and accountability for USF for the past eight years, will step in to serve a one-year appointment as senior special assistant to the regional chancellor for academic consolidation.

Chisolm’s new role will include a variety of duties, including working with Regional Chancellor Christian Hardigree and other campus stakeholders to define the academic needs on the St. Petersburg campus. She will meet frequently with campus deans and other academic leaders to facilitate this academic planning.

“We want to really look at our academic portfolio across all three campuses and decide on what majors should be offered based on student body and community needs,” Chisolm said. “We want each of the campuses to have a distinctive identity.”

During her year appointment, Chisolm will also work with campus leadership to determine the responsibilities and duties of a permanent position to lead academic affairs on the St. Petersburg campus.

Finally, Chisolm will serve as a resource on matters related to the consolidation of academic units, identifying processes that are working well and facilitating solutions in areas that need further refinement.

“We will identify examples and processes where consolidation is working, especially for students,” Chisolm said. “A lot of things are working well but some things are not as smooth, so let’s determine how to make those processes and structures smoother.”

Chisolm has been with USF since 1988, when she started as an assistant professor in the Department of Communication Sciences & Disorders. She served as the department chair from 2004 to 2014 before stepping into her current position in the provost’s office.

The other new addition to the campus leadership team is E. Howard Rutherford, who after a national search has been selected as the associate vice president of development. Rutherford will lead the development team and fundraising efforts for the USF St. Petersburg campus and, in close collaboration with leadership, establish strategic direction for the development activities on the campus.

“I envision establishing an innovative and collaborative advancement team and putting in place a structure that can elevate our campus and do what Development does best, which is to build and strengthen relationships  and bring additional resources to the university,” Rutherford said.

Rutherford has extensive experience in fundraising and donor relations along with close ties to the community. For 11 years, he was the president and CEO of the Pier Aquarium in St. Petersburg, FL. He joined USF in 2013 as the director of development for the College of Marine Science. In 2019, he was named senior director of development for the USF Foundation Office of Gift Planning.

He has played a critical role in building strong relationships with USF alumni and friends across the country and abroad, as well as within the Tampa Bay community.

“It’s quite simple,” Rutherford said. “Our goal is to connect individuals and their philanthropic passions with our university. I feel that my and my team’s successes has been by building relationships, listening to the impact our donor’s want to make and ultimately following through on a donor’s intent.”

Both Chisolm and Rutherford said they are excited for these opportunities and have appreciated the warm welcome and collaboration that has already begun.

“With their extensive experience and collaborative approach, Terry and Howard will be outstanding additions to our campus community and help advance areas that are vitally important to our continued success and growth,” said Christian Haridgree, regional chancellor of the USF St. Petersburg campus.