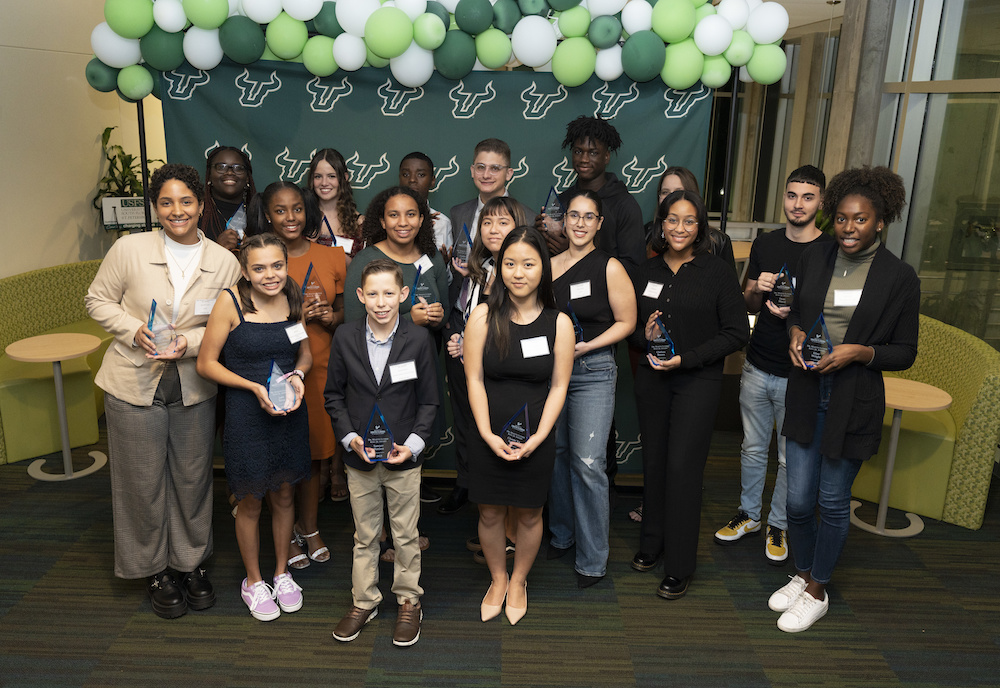 During an inspirational ceremony at the USF St. Petersburg campus on January 12, more than 15 youth from throughout Pinellas County were recognized for advancing the ideals of Dr. Martin Luther King Jr. Middle, high school and college students were celebrated for overcoming adversity, fighting for social justice and lifting up their communities.

The fourth annual Dr. Martin Luther King Jr. Awards Banquet drew a crowd of nearly 100 people to the University Student Center Ballrooms for an evening filled with powerful talks, messages about the meaning of Dr. King’s life and an award presentation to students following in his footsteps. Music from Gibbs High School Jazz Band added to the festivities.

Students and their families and guests were welcomed by USF St. Petersburg campus Regional Chancellor Christian Hardigree, who stressed that adversity isn’t unique in life, but how we respond to it shapes the person we will become.

“Everybody has to overcome some adversities in their life. But whether it is physical, financial or emotional, you’re stronger as a result of the challenge,” Hardigree said. “That is what defines character and I believe what our institution strives to shape in young people, by providing spaces where every student is seen and valued and heard.”

The keynote speech was delivered by LaDonna Butler, the associate program director for the Family Study Center at the USF St. Petersburg campus. Butler gave a powerful talk connecting the life and values of Dr. King with the dedication to community service of the students being honored.

“Dr. King grew up in a time of civic and social unrest, a time where our very humanity was being questioned. And yet he chose to lead, to live and to love,” Butler said.

She emphasized to the youth in the crowd how each of their individual stories matter and how they are all worthy of investment.

“We acknowledge you tonight. We affirm you tonight. And know this, that even in your darkest hour, and they are going to get dark, that there is a room full of people tonight celebrating you,” Butler said. “You are enough and have always been enough.”

The highlight of the evening was hearing from some of the students themselves, who were honored for an array of accomplishments, from volunteering hundreds of hours in the community to serving as mentors to overcoming adversity.

Sawyer Hansen, a sixth grader from James B. Sanderlin IB World School, detailed how watching a commercial for St. Jude Children’s Research Hospital, which treats children with cancer and other serious diseases, led him to organize the “Sawyer Swims for St. Jude” fundraiser. Now in its sixth year, Hansen has swum more than 23,500 yards and raised more than $50,000 for St. Jude.

Carter Grimm from Hollins High School spoke on how he began volunteering in the community to achieve the 100 hours of community service necessary to qualify for the Florida Bright Futures Scholarship. However, once he began, he quickly developed a strong passion for serving the community, which has led him to volunteer more than 550 hours over the last two years working for a hospice, his high school’s food pantry and the Pinellas County truancy teen court program.

And Blair Wood Jones, a college student at the USF St. Petersburg campus, recalled the challenging academic journey that led her from a small town in Arkansas to the cusp of earning a college degree. Jones grew up in Jacksonville, Arkansas and went to a school district that was on academic probation nearly the entire time she advanced from K-12th grade. Many of her classmates experienced poverty, violence and discrimination.

“I was one of the lucky ones. I was able to move away, able to attend an amazing university and now have such a bright future ahead of me,” Jones said. “And this highlights the importance of access. The things we have access to has the ability to limit or expand the possibilities of our outcomes.”

The students received standing ovations from the crowd after accepting their awards and giving their speeches, a proud acknowledgement from the community they are improving.

“Through your actions, you have proved that you’re the kind of students who want to make a difference in the world,” Hardigree said. “I encourage you to stay connected to us, no matter where you are in your education journey.”