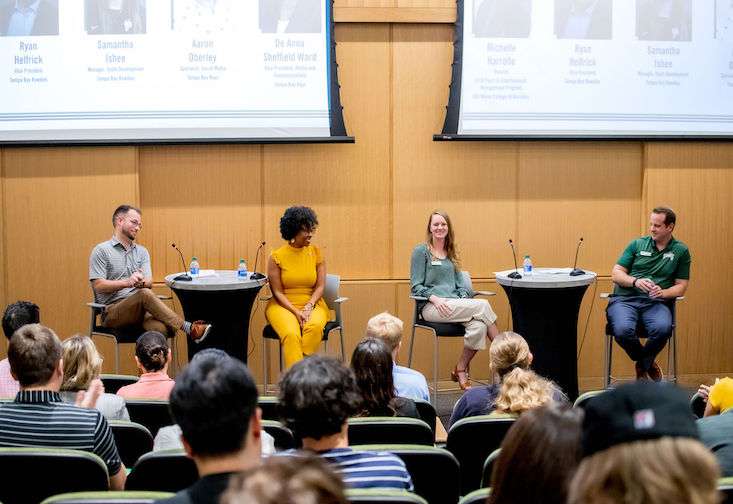 Many students dream of having a career in the sports industry, interacting with their favorite players and immersing themselves in a subject they love.

Earlier this week, about 50 students had the opportunity to gather in Lynn Pippenger Hall and get advice from a panel of sports executives and personnel on how to make those dreams a reality.

Hosted by the USF Muma College of Business, the event on September 19 brought together students from the Tampa and St. Petersburg campuses who listened in rapt attention as representatives from the Tampa Bay Rays and Tampa Bay Rowides discussed how they got started, the biggest challenges of their jobs, a typical day at the office and must have skills to be successful in the sport and entertainment field.

“When I started out in the industry in ticket sales, I had no sales experience, none at all. Having that be my first job in my career, it was challenging, scary and I was unsure of myself,” said Ryan Helfrick, vice president of the Tampa Bay Rowdies. “The biggest thing I found is, you need to dive headfirst into it. Getting on phones, speaking to people, picking people’s brains who have been doing it for a while and learning by their example.”

Along with Helfrick, the panel included:

“The biggest piece of advice I can give if you are trying to get into sports is have a reason. For me it was the fact that baseball was the first thing that gave me confidence as a kid and gave me something larger to be a part of,” Oberley said. “It’s really been impactful to me and I know what it could do for a young kid who hasn’t had that before.”

The evening discussion was moderated by Michelle Harrolle, director of the USF Vinik Sport & Entertainment Management Program, who peppered the panelists about their varying career paths along with light hearted questions that needed to be answered in seven words or less.

“Have a brand-new stadium, immediately,” Ward answered emphatically when asked about something she would change professionally if she had a magic wand. The Tampa Bay Rays have been searching for a new home park for more than 15 years.

The event concluded with questions from students, who were interested in the skills needed for success and what each of the panelists looked for when hiring a new employee.

"Having the opportunity to bring the Tampa Bay Rowdies and Rays to campus, while giving students the chance to hear directly from leaders in their respective industries was really exciting,” said Sean Schrader, student body governor at USF St. Petersburg campus.

After the event concluded, many students stayed after to talk one-on-one with the panelists to glean even more insight, doing something all the panelists mentioned was one of the keys to success in the industry: networking.