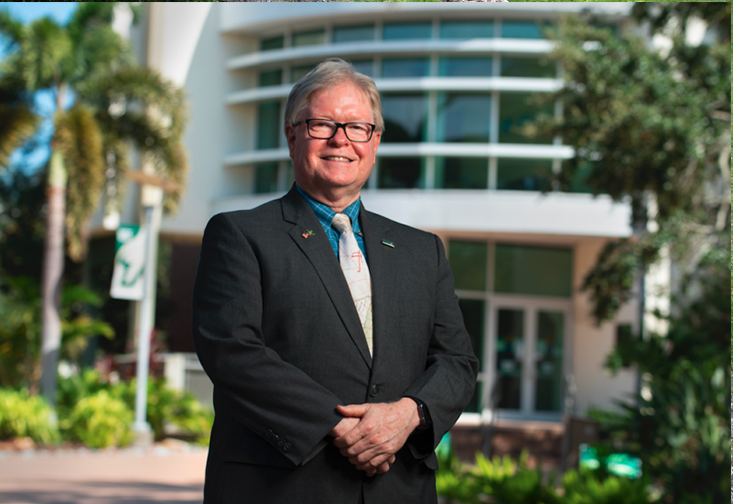 Regional Chancellor Martin Tadlock was unanimously chosen for the President’s Award, the highest honor NASPA bestows on a college or university president or chancellor.

USF St. Petersburg campus Regional Chancellor Martin Tadlock has received the 2021 President’s Award from the NASPA-Student Affairs Administrators in Higher Education. This special NASPA honor is presented to a college or university president or chancellor who has, over a sustained period, advanced the quality of student life on campus by supporting the institution’s student affairs staff and initiatives. This award is the highest honor NASPA bestows on a college or university president or chancellor.

Tadlock was unanimously chosen for the award by the NASPA board and will be honored in March as part of the 2021 NASPA Virtual Conference.

“I congratulate Dr. Tadlock on this outstanding recognition of his career-long focus on the needs of students,” said USF President Steven Currall. “At USF, Dr. Tadlock’s leadership of our St. Petersburg campus has strengthened our commitment to helping students pursue their graduation and life goals.”

Tadlock has spent more than 40 years in a variety of education and educational leadership positions throughout his career. He has fulfilled roles as a middle school teacher, a professor, a program coordinator, a director of a national center for education, a dean, an assistant vice-chancellor and a provost.

“An award is never about one person,” said Tadlock. “At the same time, I was flattered that a group of people believed so much in what we are doing that they invested the time in submitting a nomination. It’s humbling.”

He has been the regional chancellor at USF’s St. Petersburg campus since August 2018, and served as the interim chancellor since September 2017. In this role, Tadlock oversees and ensures the overall excellence of the campus.

Under his leadership, the campus adopted a comprehensive focus on elevating the achievement of students, uniting the academic affairs and student affairs departments together and setting up systems to intervene proactively to ensure students succeed and graduate on time. This resulted in a dramatic 9-percentage-point increase in the campus’ academic progress rate and an even higher climb in first- to second-year retention rates, or the percentage of students who attend college freshman year and return to the same college the following year, from 75 percent in 2017-2018 to 87 percent today.

“As a leader, Dr. Tadlock transformed the culture at USF’s St. Petersburg campus by making students and their success a top priority for all,” said Susan Churuti, a USF St. Petersburg campus advisory board member. “By emphasizing transparency and open dialogue, he has kept morale high even during these trying times for higher education, and motivates faculty and staff to keep their focus on students to offer them the best possible college experience.”

Tadlock has helped to institute a number of other key student-focused initiatives during his tenure that have proven widely successful, such as: