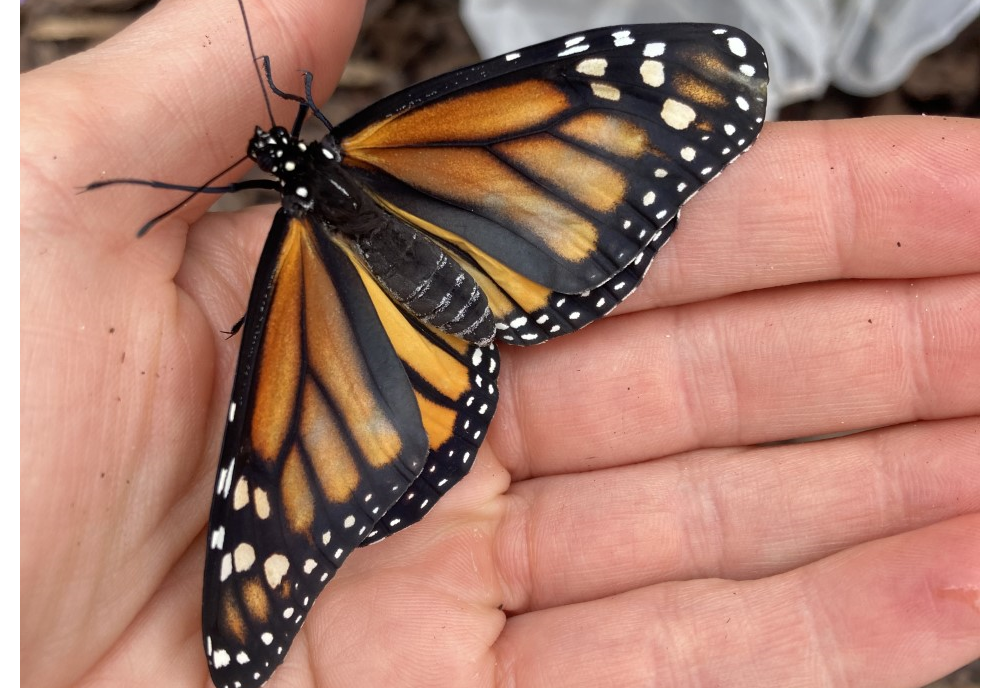 Around 60 monarch butterflies appeared on campus in caterpillar form recently, famous for their brilliant orange wings and epic migration.

Darla Ostenson and the groundskeeping crew planted milkweed (mostly devoured in this image) that attracted monarch caterpillars to campus.

In caterpillar form, nearly 60 individuals of this imperiled species appeared one morning outside of the Peter Rudy Wallace building, attracted by milkweed planted by the groundskeeping crew at USF’s St. Petersburg campus. Milkweed are the sole food source for the caterpillars and monarch butterflies lay their eggs on the plant.

“When we changed the landscaping at this location, it had to do with keeping vegetation below four feet for security reasons,” said Darla Ostenson, groundskeeping supervisor. “We wanted a more permanent solution that wouldn’t involve too much water and fertilizer, so we decided to plant Florida natives with the hope of attracting native pollinators.”

The plantings, which included twin flower, coontie palms and native yellow flowers along with milkweed, occurred in late February. Then on a Monday in early April, Ostenson walked by to see the milkweed plants practically vanished.

“I was overwhelmed how many caterpillars showed up so quickly, way more than we had plants to support. On Friday, the plants looked great and by Monday all the milkweed was gone,” said Ostenson.

Monarch butterflies are famous for their brilliant orange wings and epic migration. Each year after transforming from a caterpillar to a butterfly, these tiny creatures travel anywhere from 1,200 to up to 2,800 miles or more from the United States and Canada to wintering grounds in central Mexico, according to the World Wildlife Fund.

In recent decades, the species has become imperiled due to loss of habitat. Significant declines of the population have been documented across the country, and the U.S. Fish and Wildlife Service has found that listing the species as endangered is warranted.

Which is why it was terrific news that the caterpillars found on campus were so numerous that Ostenson and the crew had to set out to find additional milkweed plants while relocating some monarchs to plant nurseries that could support them. Reaching out to the campus community and to butterfly-friendly Facebook groups, Ostenson received donations of milkweed plants, including from long-time campus presence Sudsy Tschiderer.

Paint strainers were used as netting over the plants and caterpillars to reduce the chance of death by predators.

“When we had all these caterpillars with little food left, I called a native plant owner that the campus works with. I asked how many milkweed plants he had left and quickly purchased them for the cause,” said Tschiderer, who has been a part of the campus community for more than 50 years, first as a student and then a staff member, and is currently part-time support staff for the Advancement department. “I am a pollinator geek and a butterfly gardener who hopes to make a tiny bit of difference for our environment and for our pollinators.”

Meanwhile, Ostenson connected with Little Red Wagon Native Nursery in Tampa, where she relocated 20 caterpillars and picked up additional milkweed plants. Through research, it was discovered the caterpillars will eat butternut squash during the final stages of its transformation, so squash was put down around the plants. Discussions with alumni Dan McGarigal, who created the butterfly garden on campus, resulted in the grounds crew using paint strainers as netting to put up over the plants and caterpillars to reduce the chance of death by predators and parasitic wasps.

These actions have resulted in the survival of many caterpillars to date, with most now in the stage of transforming into butterflies inside protecting pods called chrysalis.

“Currently we have about five to 10 active caterpillars and around 20 that are in chrysalis, which lasts about 10-12 days,” said Ostenson. “Now we just wait and see when the butterflies will come out and fly away.”