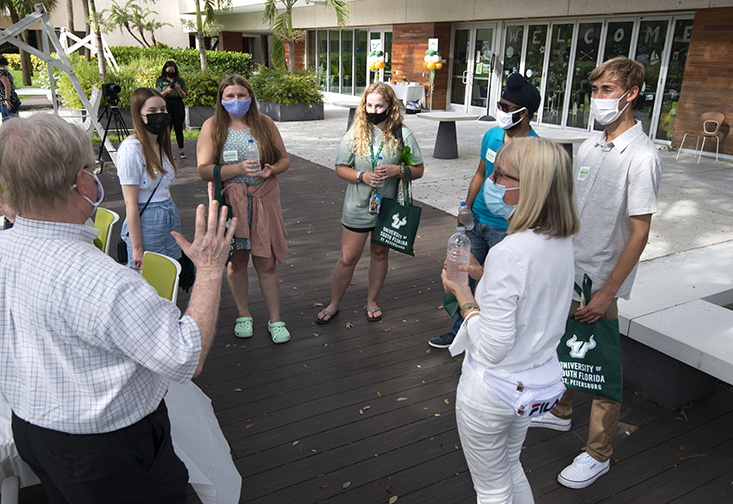 For the first time in history, USF’s St. Petersburg campus is welcoming a National Merit Scholar in its incoming class. In fact, it is welcoming five of them.

“All five are outstanding young people pursuing their hopes and dreams just like their fellow bulls, and who have come here because of our academic reputation, the campus size, the opportunities for engaging in the community and the sense of place," said Martin Tadlock, regional chancellor at USF’s St. Petersburg campus. "When five National Merit Scholars choose this campus for the first time in our history, I believe their choice reflects the visibility that comes from being a distinctive destination campus of a highly ranked research university."

“It makes me happy,” said Winsome Nisbett, coordinator for scholar programs in the Office of Admissions at USF. “It’s a lot of hard work to recruit this body of students. They are the cream of the crop, the top of the class, coming from all over the world.”

Nisbett attributes the increased enrollment of such students to a concerted effort by USF and the State of Florida to bring academic talent to the state. In 2016, the newly created Benacquisto Scholarship Program helped universities recruit students by including merit scholarship benefits for high school graduates who receive recognition as National Merit Scholars.

In addition, it gives USF the ability to recruit students by offering them full tuition waivers, on-campus housing, financial support for textbooks and more. As a result, both Florida and non-Florida National Merit Finalists at USF receive some of the best benefits in the country.

“USF had the best scholarship for national merit. I looked at a bunch of colleges, and they by far had the most generous offer and the best campus too,” said Schuyler Jones of Santa Rosa, CA, who is studying Environmental Science. “They had great faculty, and when I came to campus, they wanted to talk to me. I was on a zoom call during the pandemic with Chancellor Tadlock before I even came here.”

In addition to Jones, the National Merit Scholar students in the incoming class at the St. Petersburg campus include:

“I’m interested in neuroscience and genetics, so biology honestly scratches every itch, and my major was here,” Selvig said. “[The campus] is more walkable. Five thousand students is a lot smaller than fifty thousand, so it’s much more manageable for me. It’s very hot, but otherwise, you can get everywhere within just a few minutes.”