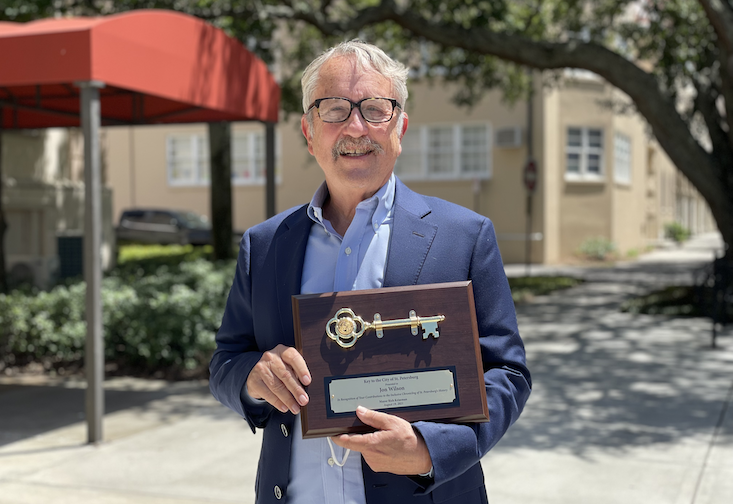 Wilson's contribution to local history and documenting the African American experience was recognized when he and fellow historian Gwendolyn Reese received keys to the city of St. Petersburg. Photo courtesy of The Weekly Challenger.

In 2002, journalist Jon Wilson heard about African American residents and businesses being displaced in the historic 22nd South Street corridor of St. Petersburg. He visited the location, talked with those affected, many of whom had been in the area for generations, and filed his story.

What started as a singular piece on the changing character of a community for the St. Petersburg Times (now the Tampa Bay Times) would turn into nearly two decades of chronicling the African American experience in St. Petersburg.

Wilson’s significant contribution - which includes countless newspaper stories on the city and its communities, two books on St. Petersburg’s African American history with colleague Rosalie Peck, part of a team that established the African American Heritage Trail, and a recent documentary titled “A History of Civil Rights and Social Change in Pinellas County” based on some of his research and writings - were recognized in a ceremony last month when he and fellow local historian Gwendolyn Reese received keys to the city of St. Petersburg.

“I worked for newspapers in St. Petersburg for 37 years, and this was the most rewarding aspect of my career,” Wilson said, regarding his work documenting African American history in the city. “It is a pretty high honor, the highest award the mayor can give to a citizen. And I’m very proud of it.”

“You’ve told the stories of our people, past and present, in an impactful way. You’ve moved us closer to our vision of being a city that honors our past as we pursue our brightest future,” Kriseman said in a video message.

“Congratulations to Gwen Reese and Jon Wilson… for their meritorious service in the inclusive telling of our city’s history,” Tomalin said in a tweet after the ceremony. “St. Pete is a more conscious, inclusive, equitable community because these historians call it home.”

Wilson’s path to being a writer of local history began in 9th grade. That is when a principle at his junior high started a student newspaper. Wilson became the editor.

“We published every two weeks, which is hard when you are a 14-year-old,” Wilson said laughingly. “After that, I never really looked back.”

During those years of covering the city and its people, Wilson became a USF St. Petersburg campus alumnus three times over. He received a bachelor’s degree in English in 1977 and went on to earn master’s in both Journalism and Florida Studies.

“I thought the world of the professors I had. It’s kind of a second home away from home,” Wilson said.

His first home away from home was the newsroom and the city he covered. Being a journalist in St. Petersburg was like “opening a new world” to him, and the people he met and the stories he told made him “appreciative of the entire community.”

It was his journalistic curiosity that led him to the community around 22nd Street South and the beginning of a long journey.

“I started on the 22nd Street story and it branched out from there. And then you meet people and they introduce you to three more people and pretty soon you get to be known and people are calling you up with story ideas,” Wilson explained. 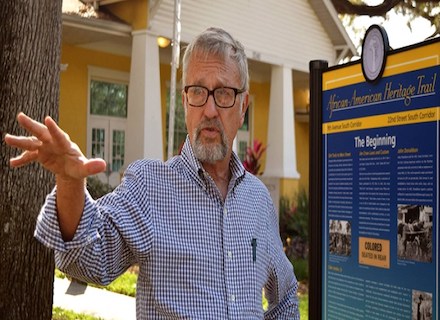 Wilson, working with Reese and organizations such as Dr. Carter G. Woodson African American Museum, was also instrumental in the creation of the African American Heritage Trail that opened in 2014. The self-guided walking tour covers more than a dozen blocks and documents important local history and landmarks.

And earlier this year, a documentary on the civil rights history of Pinellas County, based off an exhibit researched and co-curated by Wilson and Reese at the Center for Health Equity, was released. The documentary details stories of people fighting to secure rights, combat injustice and advance equity.

“The whole thing sort of sprung from that first newspaper story,” Wilson said.

Though no longer a daily reporter, some days you can still find Wilson chronicling the history of the communities of St. Petersburg as he leads tours on the Heritage Trail.