USF to launch new Center of Excellence in Environmental and Oceanographic Sciences on the St. Petersburg campus 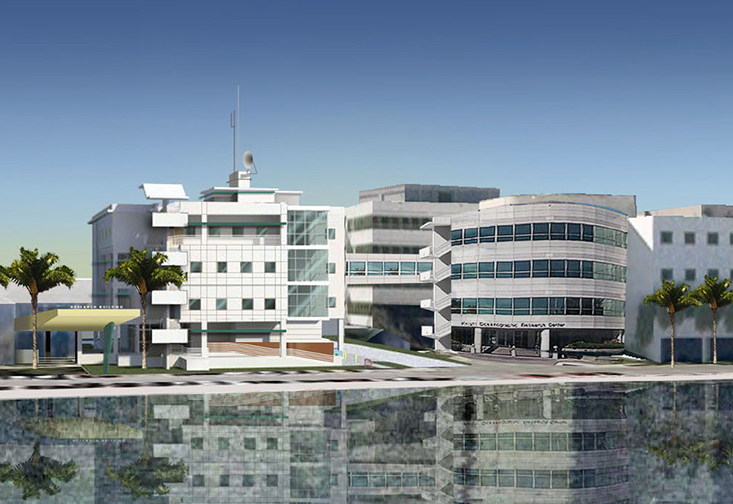 Illustration for discussion purposes only – not actual rendering.

The University of South Florida is seeking support from the Florida Legislature and the local community to advance a bold new plan for an interdisciplinary center of excellence that will harness the collective power of colleges and departments from throughout the university to address the existential challenges created by climate change, including sea level rise, high tide flooding events and other coastal hazards.

The center will be located on USF’s St. Petersburg campus and will build on the world-class reputation of the College of Marine Science. It will bring a variety of new undergraduate and graduate programs to the St. Petersburg campus and is envisioned as a national destination for students and researchers studying issues related to the environment, oceanography and sustainability.

“What this innovative, groundbreaking center of excellence will achieve can be summed up in a single word – impact,” USF President Rhea Law said. “It will make an enormous difference for our students, our faculty and our community, and is poised to make waves both nationally and internationally.”

At the heart of the plan is a proposed new building, called the Environmental & Oceanographic Sciences Research & Teaching Facility. The $80-million project would provide state-of-the-art research and instructional space for both graduate and undergraduate students from the colleges of Marine Science, Arts and Sciences, and Engineering.

The facility will also house the Florida Flood Hub for Applied Research and Innovation, which was proposed by Florida House Speaker Chris Sprowls and approved by the legislature in 2020. The Flood Hub will establish a home base of expertise in coastal resiliency that will serve the entire state of Florida, with scalable impact for other coastal communities nationwide.

The building would serve as a hub for researchers studying the effects of sea level rise, high-tide flooding events and other environmental issues in ways that are accessible to policymakers, planners, elected officials and the general public. In addition, a new data visualization center is envisioned to provide information that improves forecasting models, helps identify flooding hazards, and assesses their economic impact.

USF is seeking public education capital outlay (PECO) funds during the upcoming Florida legislative session to start immediate construction on the building. The total cost of the project is estimated at $80.3 million. Of that total, $60.3 million will come from the state and $20 million will come from USF, as recommended by the Florida Board of Governors.

“This building is the springboard we need to launch a constellation of cross-cutting programs that empower USF to face today’s grand challenges with innovation, dialogue and resiliency,” said Tom Frazer, dean of the College of Marine Science.

The funds, if secured, would be used to demolish the northwest wing of the existing Marine Science Complex at 830 1st St. South in St. Petersburg. The wing will be replaced with a new four-story addition, and the remainder of the 80-year-old complex would be remodeled to accommodate research labs, teaching labs and classrooms for new programs.

The center of excellence will expand on existing programs at USF’s St. Petersburg campus and the College of Marine Science as well, while providing opportunities for new degrees in coastal and ocean engineering, science journalism, a blue/green MBA (a Master’s of Business Administration focused on sustainability and marine science-related businesses) and environmental chemistry.

“Our vision is to build upon St. Petersburg’s identity as a vibrant cultural center of thought leadership, businesses, STEM and the arts and become a global destination on the leading edge of the blue-green economy,” said Martin Tadlock, regional chancellor of USF’s St. Petersburg campus.

When fully funded, the new facility is expected to generate tens of millions in economic impact annually.

The facility will be in an ideal location in the city’s Innovation District, which is home to the largest collection of marine science, oceanographic and environmental research agencies and institutions in the Southeast. The district includes the regional headquarters for the National Oceanic and Atmospheric Administration; the U.S. Geological Survey Coastal and Marine Science Center; the Florida Fish and Wildlife Research Institute; the Florida Institute of Oceanography; and the U.S. Coast Guard, among others. Altogether, more than 1,900 marine science-related employees work in the .83-square-mile district.

Jason Mathis, CEO of the St. Petersburg Downtown Partnership, said the members of his organization are supporting the initiative and that it will be an important project for both the local economy and the entire state. The St. Petersburg City Council has also unanimously passed a resolution expressing its support.

“This will be a game changer, not just for USF and our Innovation District, but for the way we think about managing rising oceans and flooding and severe weather in coastal communities,” Mathis said. “Research from this facility will help shape the insurance industry, environmental engineering, zoning and real estate development decisions. It will make our cities more resilient and connect the many different marine science elements that are already part of this campus.”

The location is also fitting, given the Tampa Bay region’s vulnerability to storm surge from hurricanes and other flooding events. A Boston-based firm that analyzes potential catastrophic damage estimated that the region would lose $175 billion if it were struck by a storm the size of Hurricane Katrina. In addition, a World Bank study named Tampa Bay one of the 10 most at-risk areas in the world from damaging floods.

“We live in place where more than 30 percent of the county is in the coastal high-hazard area,” Tadlock said. “Bringing together all of the resources of USF dedicated to the environment, sustainability, the water, climate change and sea level rise is extremely important. We want to be the place where anybody who studies in those areas will be attracted to come and help us meet the serious challenges ahead.”