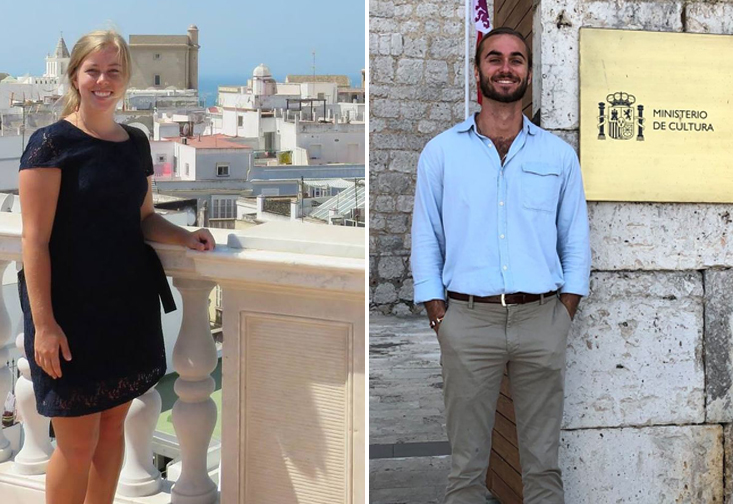 If you ask Morgan Greig and Hannah Tweet if they planned on pursuing doctoral degrees at two world-renowned universities, they would say no, not at first. Instead, it took years of hard work, an inspiring academic mentor and a unique paleography program offered only at the USF St. Petersburg campus to fulfill their ambition.

“I applied to see what would happen, and I got in! It’s very exciting,” Greig said, who will graduate this summer after he completes his thesis about Hernando de Soto’s expedition to Florida. “When I finish my thesis in June, I plan to visit England to see what it’s like before I pick up and move. I’ve never been there before.”

Greig will earn a master’s degree in Florida Studies from the USF St. Petersburg campus. As both an undergraduate and graduate student, he spent several months conducting research by combing through historical documents at archival collections in Spain. He credits much of his success to his mentor History Professor J. Michael Francis, who also attended Cambridge.

“His paleography program teaches students how to read 16th and 17th-century Spanish handwriting. I don’t know if there is another program like it at this level that teaches students how to do the research,” Greig said. “Without that, I would have never gotten off the ground. So that’s where all this is rooted; in that class and his inspiration.”

Greig will attend the historic Peterhouse, the oldest of Cambridge’s 31 colleges. His studies will explore the social, political and economic factors in the evolution of Spain’s conquest following its discovery of Peru in the 1530s. The research and data from his master’s thesis will play an essential role in his Ph.D.

At USF, the work of Greig and Tweet contributed to La Florida: The Interactive Digital Archive of the Americas. La Florida is a groundbreaking project that weaves together short videos, interactive maps and digital reconstructions to bring to life the diverse melting pot of people who made up early Spanish Florida. It seeks to alter the way the public looks at the early history of Florida, America and world history.

The digital archive was created by Francis, who also serves as executive director. His paleography program is why Tweet came to the USF St. Petersburg campus in 2016 to pursue her master’s degree in Florida Studies.

Tweet graduated in Summer 2019, but continued working on La Florida and conducted research with her colleagues at archival collections in Spain and Mexico. She applied to eight colleges and universities and received six incredible offers during that time. Ultimately, she chose to attend Michigan, where she will get six years of funding for tuition, housing and health benefits.

“It gives me a sense of security and allows me to focus on my studies. Why wouldn’t you do that if you can get paid to study and conduct research? It’s a great privilege,” Tweet said.

Tweet’s studies at Michigan will focus on 16th and 17th-century Latin American and Caribbean history, including Florida. She credits Professor Francis and USF with giving her the skills she needed to pursue a doctoral degree in history.

“It’s a good feeling. But, more than anything, it gives me the confidence moving forward to know that I can be a historian. I can do the research I want to do. I will have the tools and abilities and people that will support that. It’s exciting, hard and challenging, but that’s part of the process.”