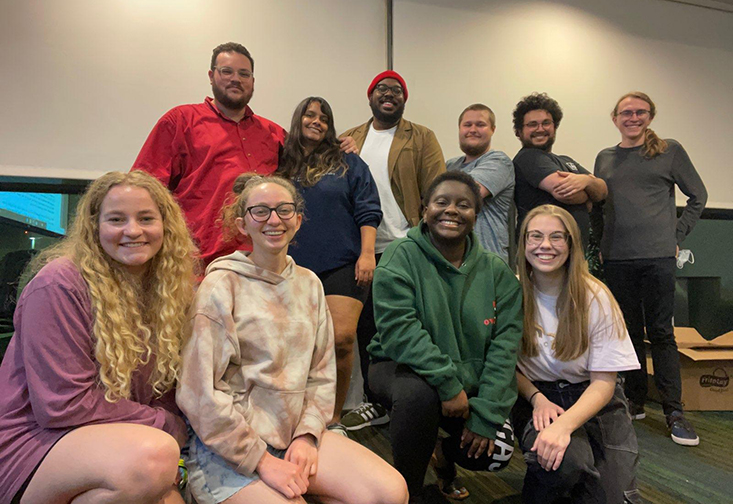 The USF Ethics and Debate team works with coaches, former team members and faculty advisors to prepare for their competitions

For the first time in its seven-year history as a student organization at USF, the Ethics and Debate team will compete in the Intercollegiate Ethics Bowl (IEB) on February 26 and 27.

The four-member team, comprised of students from USF St. Petersburg and USF Tampa campuses, placed second in their regional competition, earning them a spot in the national championship in Cincinnati, Ohio. The virtual competition will include teams from 36 colleges and universities throughout the United States, and is hosted by the Association for Practical and Professional Ethics (APPE).

In November and December 2021, approximately 150 teams competed in 12 regional competitions. The USF team competed in the Southeast Regional Ethics Bowl. In a very close final, the U.S. Naval Academy took first and USF took second. The top two teams from the region advanced to the national competition.

“It’s exciting. I’m so glad we finally made it past the regionals,” said Julia Linkogle, a Mechanical Engineering major at the Tampa campus. Linkogle was on her debate team in high school and was excited to see that USF had a competitive Ethics and Debate club. “Our job is to take the cases and analyze them through different ethical lenses. Then, we make our analysis and propose what the most ethical solution would be.”

In advance of the national competition, each team received 17 cases that explored various professional, social and political ethics. The topics included animal testing, where scientists used rodents to examine the possibility of males gestating fetuses and euthanizing them afterward. Another topic explored hate speech and creating a free-speech zone on campus to express controversial views.

Each team must prepare an analysis of all the cases, with particular cases being drawn from the set during several rounds of the competition. At the competition, a moderator will present questions to the team based on that case.

“Everybody can come back with different angles. It’s really interesting. Even when you think there’s no other way you can take this conversation, another team will pop up and have a completely different viewpoint that you hadn’t thought of yet,” Linkogle said.

According to APPE IEB, the rating criteria are intelligibility, focus on ethically relevant considerations, avoidance of ethical irrelevance and deliberative thoughtfulness.

“And that’s the great part about this competition. It’s the type of conversation that we don’t have in this modern day,” said Tijen Jones, an Interdisciplinary Social Sciences major, focusing on Political Science and History at the St. Petersburg campus. “Usually, we’re just speaking at one another, and this competition requires you to understand other people’s perspectives and talk about those other perspectives.” 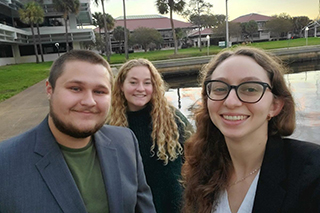 Along with Jones and Linkogle, the team also includes Veli Adyoner, a Political Science major and Liana Howe, a History and Anthropology major. Throughout the year, the students work with coaches, former team members, a faculty advisor and are supported by USF’s Bishop Center for Ethical Leadership as part of the Muma College of Business.

“One of our primary missions is to equip students with the power to make ethical decisions,” said Bekah Vigil, the student program coordinator for the Bishop Center, which helps the team raise money for competitions and travel. “It’s a very complex and important leadership skill that is gaining relevance in the 21st century. The definition of what is ethical changes from context to context, in different industries, and it changes as time goes on.”

The coveted national championship IEB title will be announced on February 27 following the competition.