Associate Professor Heather Judkins displays some of the specimens she's collected in the Gulf of Mexico and talks about why she's still passionate about research and teaching after 26 years.

Even after teaching biology for nearly three decades, Heather Judkins still gets excited about conducting field research. An associate professor of Integrative Biology on the USF St. Petersburg campus, Judkins will continue her studies of cephalopods, such as octopus and squid, on July 26 as part of a team of scientists aboard the R/V Point Sur for a 12-day research cruise around the Gulf of Mexico.

The goal of the cruise is to identify and quantify long-term trends in fishes, crustaceans and cephalopods in the midwaters of the Gulf in response to the Deepwater Horizon oil spill that occurred in 2010.

"We're collecting specimens and looking at the biodiversity in that area and how it changes over time," Judkins said. "We want to know what we could see in the future, in the unfortunate event of another oil spill." 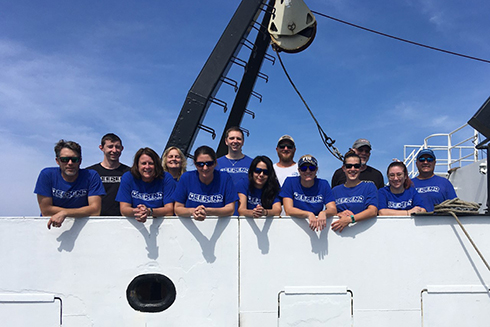 Judkins and Romero with DEEPEND team on the R/V Point Sur in the Gulf of Mexico.

The five-year research initiative is conducted by the Deep-Pelagic Nekton Dynamics of the Gulf of Mexico (DEEPEND) Consortium, which consists of 47 scientists from 11 universities and research organizations across the country. Judkins is a co-principal investigator on the project along with another USF colleague, Isabel Romero from USF's College of Marine Science.

The DEEPEND consortium is part of NOAA's RESTORE Science Program, and the current project is funded by a $2.7 million grant from the RESTORE Act, established in the wake of the oil spill. The funds are designed to study, restore and protect natural resources and ecosystems in the Gulf Coast region.

To do this, the scientists are using a Multiple Opening Closing Net and Environmental Sensing System (MOCNESS). The system is a series of nets towed behind a research ship that can be opened and shut independently, so that each net samples a specific patch of water. When each net is brought on board the research vessel, the scientists gather the organisms and collect relevant data.

This will be Judkins eighth DEEPEND cruise. Inside her lab on the USF St. Petersburg campus is a collection of specimens she has studied over the years. Most are squid of various sizes, well-preserved in jars scattered throughout the room. As an expert on cephalopods, she uses these specimens to provide hands-on training for her students.

"For me to be able to bring in deep-sea specimens, stories and data that we have collected and then use them for my undergraduate and graduate students is amazing. I feel fortunate that I can share the experiences with them because I am still naturally excited about it," she said. 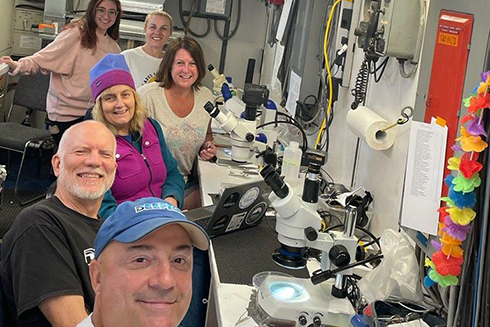 Judkins, an expert on cephalopods, has been on seven DEEPEND cruises in the Gulf

In the past, the DEEPEND crew has discovered three new species of Bathyteuthids, a type of squid that lives in depths between 700 and 2,000 meters. The findings were validated and published in 2020. Another new squid species description is currently in review at the Bulletin of Marine Science.

"We have approximately 70 species of squid and octopus living offshore in this mid-water column. There are hundreds of species of fish, and shrimps and crustaceans as well," she added. "Another thing we didn't know beforehand is where everybody lives within the water column. The MOCNESS allows us to examine the vertical distribution patterns of these amazing creatures."

In addition to discovering new species, the DEEPEND team continues to gather important data on marine life in the Gulf and the continuing impact of the oil spill, that they hope to publish later this year.