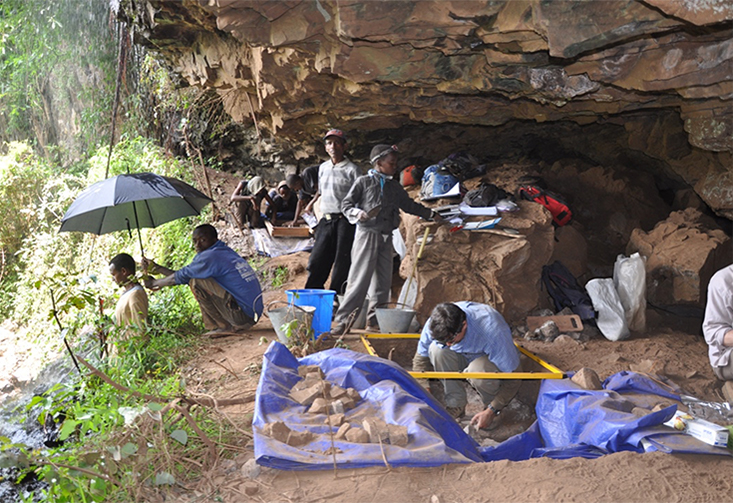 Fossilized plaque scraped from the teeth of a 4,500-year-old skeleton discovered by University of South Florida professors is helping to unlock the secrets of what ancient humans ate and how our species evolved.

The findings from the groundbreaking study reveal that starchy foods were part of the human diet millions of years earlier than previously thought, which could have played a significant part in how ancient humans’ brains evolved. The results were published today in the Proceedings of the National Academy of Sciences of the United States of America, a multidisciplinary scientific journal.

Calcified plaque taken from a skeleton discovered in the Mota Cave in the highlands of southern Ethiopia in 2012 by USF St. Petersburg campus anthropology Professors Kathryn Weedman Arthur and John Arthur and their colleagues was used as part of the ambitious study.

The skeleton, named Bayira by the Arthurs – meaning “first born” in the Gamo language of the people who inhabit the area today -- was laid out in a ceremonial burial and surrounded by obsidian tools. Animal and fish bones were also found nearby.

“Since we didn’t recover any seeds or any plant material, we didn’t know what he ate besides meat,” Weedman Arthur said.

Bayira’s calcified dental plaque was one of 120 specimens analyzed by the researchers, who come from 41 institutions in 13 countries. The team analyzed billions of DNA fragments in order to identify the long-dead bacteria and compared it to the oral microbiome of wild chimpanzees, gorillas and howler monkeys.

Their most significant finding is one group of bacteria present in both modern humans and Neanderthals is specifically adapted to consume starch. This suggests starchy foods such as roots, tubers and seeds became important in the human diet long before the introduction of farming. Some researchers believe the transition to eating these starchy foods, which are rich in energy, may have enabled humans to grow the large brains that characterize our species.

“Understanding the role that food played in the evolutionary development of human uniqueness is complicated because many types of food remains — especially plants — are poorly preserved in the fossil record,” said John Yellen, director of the National Science Foundation’s archaeology and archaeometry program, which supported the research. “This innovative study of ancient bacteria preserved in fossil plaque provides a new and powerful way to understand the evolution of humans and our social and ecological history.”

This is not the first major discovery associated with Bayira’s remains. A DNA analysis of the skeleton’s ear bone provided researchers with the first ancient human genome completely sequenced from the African continent. The DNA contained three genetic variants, which indicated he was adaptive and capable of living in low-oxygen, high-altitude conditions.

“His DNA told us that he was adapted to live in a highland environment and that he was lactose intolerant,” Arthur said. “Now this little piece of plaque has led to this great discovery and Bayira continues to tell a story.”

The Arthurs began their anthropological field research in Ethiopia more than 20 years ago and have focused much of their work in the Gamo Highlands. They had to pause their research due to COVID-19 for the past year but hope to return soon to continue their study of the region.

“It’s exciting that we got to be part of this discovery,” Weedman Arthur said. “Now there’s new technology and there are other people who can learn with us and help us tell even more of Bayira’s story than we can tell by ourselves.”