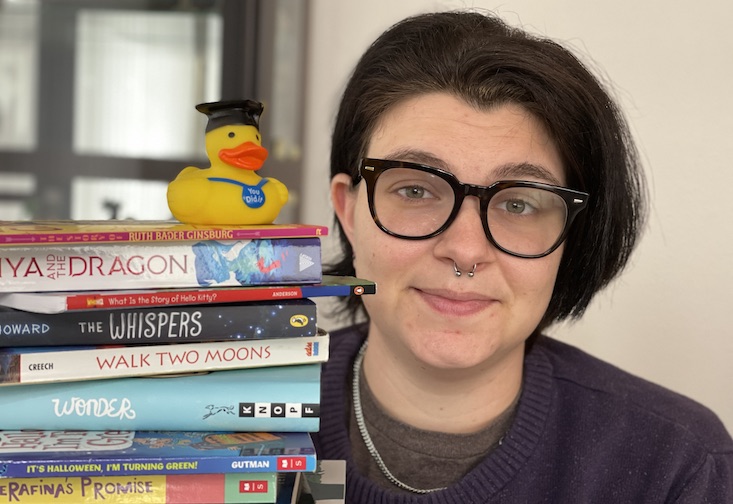 Tobin will be graduating this spring with a bachelor of science in elementary education with endorsements in reading, elementary science instruction and leadership (ESIL) and exceptional student education (ESE).

For the first four years of Toby Tobin’s college experience, he struggled with coursework and connecting with others.

He started at a large university and transferred to another one, and then to another one. Along the way, he switched his major multiple times, taking classes in music and environmental science. He felt lost, got easily overwhelmed, developed a fear of going back to class if he missed one and saw relationships with family and friends deteriorate.

“I went from being an A student in my high school IB program (International Baccalaureate) to failing school for four years straight,” said Tobin. “I did not understand how that could happen.”

Seeking answers, Tobin sought medical advice. In 2016, he was diagnosed with Asperger’s Syndrome, a condition marked by difficulty with social interactions and navigating new routines, as well as hypersensitivity to lights and sounds. In 2020, he would be diagnosed with autism.

“When I received these diagnoses, it made sense. I had no skill learning a new schedule or being on my own,” explained Tobin. “As I learned what it is like being a person with Asperger’s and autism, I learned about the support that is needed.”

As he was just making sense of the conditions he had, his family moved to St. Petersburg, Fla. There, Tobin discovered USF’s St. Petersburg campus.

“I realized that I needed something smaller that felt like home and had a close-knit community,” said Tobin.

At the campus, he settled on his fifth and final major; education. A past relationship with a person studying to be an interpreter exposed him to sign language. He got involved with the hard of hearing and deaf community. Encouraged by his father and a love for American Sign Language, Tobin developed a passion for teaching.

Tobin is now in his eighth year of college and will be graduating this spring with a bachelor of science in elementary education with endorsements in reading, elementary science instruction and leadership (ESIL) and exceptional student education (ESE).

He credits understanding and working with his condition and support from his long-term partner and parents with helping him get to this point. He also praises his many professors in the College of Education for their tremendous encouragement and the services and support provided by the campus community for helping him stay on track and earn his degree.

“The number one thing that worked for me was building a rapport with my professors. They have been so amazing and flexible,” said Tobin. “They have helped so much with building relationships with my peers, with teaching me how to manage a schedule and preparation so I don’t feel overwhelmed.”

Though he wishes he had known about having Asperger’s and autism earlier - which resulted in walking out of classrooms or avoiding work when feeling overwhelmed - Tobin believes everyone’s experience is different and his journey through college taught him many lessons beyond the classroom that will help in the future.

Tobin is now applying to become a 4th or 5th grade teacher in Pinellas County, where he hopes to help students like himself and share his love of books and art with others.