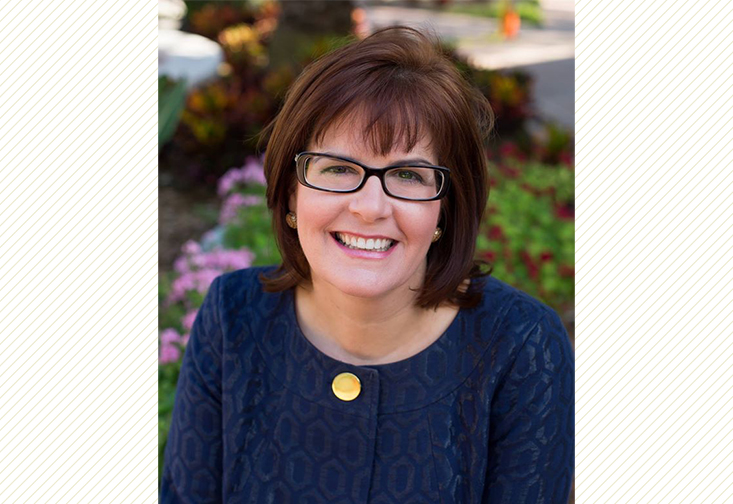 Judithanne Scourfield McLauchlan was the recipient of the 2021 Barbara Burch Award for Faculty Leadership in Civic Engagement, a national award.

Judithanne Scourfield McLauchlan, associate professor of Political Science and founding director of the Center for Civic Engagement (CCE) at the University of South Florida St. Petersburg campus, is the 2021 winner of the Barbara Burch Award for Faculty Leadership in Civic Engagement.

The national award is given to an educator each year who provides extraordinary leadership in the ongoing development of the American Association of State Colleges and Universities’ (AASCU) American Democracy Project (ADP). The ADP is a network of 296 state colleges and universities that focuses on preparing the next generation to become informed, engaged citizens for democracy.

"I know there are many people out there as passionate as I am about civics education, so it’s very special to be honored with this award,” McLauchlan said.

As USF’s St. Petersburg campus representative for the ADP, one of McLauchlan’s goals as an educator is to create thoughtful, active citizens. McLauchlan founded the CCE in 2006 and works alongside organizations like the ADP to promote the citizen scholar model.

“The most critical or foundational aspect of our education is to develop citizens who are prepared to participate in our democracy,” she said. “The ADP has been doing critical work to help universities fulfill their mission to develop citizen scholars.”

Martin Tadlock, regional chancellor at USF’s St. Petersburg campus, nominated McLauchlan for the Burch Award because of her leadership role in expanding civics education on campus and in the state.

“As a campus, we pride ourselves in the depth and strength of our community partnerships as well as the integration of civic engagement across the curriculum in what we call our Citizen Scholar Program,” Tadlock said. “Not only has she worked tirelessly to advance civic learning and engagement across our campus, but she has also been a leader in civics education programs across the state of Florida.”

One of McLauchlan’s major accomplishments was launching the Civics Fellows Program in partnership with the YMCA in 2018. Made possible by the Florida Legislature, the program is the first of its kind in the nation and provides scholarships for 75 Florida high school students to earn up to six college credits in politics and leadership at the St. Petersburg campus, while gaining hands-on experience in government and public service. As the lead instructor for the program, McLauchlan designed the curriculum for the courses and works with students from around the state.

She has extensive experience in American government and has worked at the U.S. Supreme Court, the U.S. Senate Judiciary Committee, the U.S. Department of Justice and the White House.

The 2021 Barbara Burch Award was presented to McLauchlan at the ADP’s annual Civic Learning & Democratic Engagement Meeting on June 10. Held virtually this year, it brought together faculty, campus administrators, students and community partners.