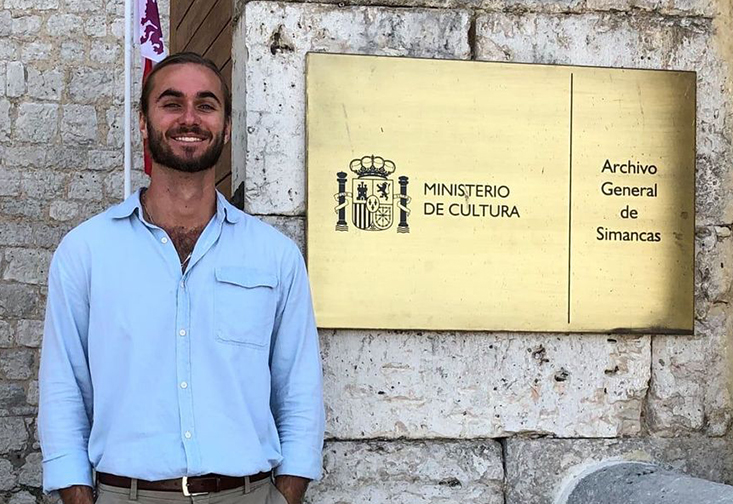 Morgan Greig outside the General Archive of Simancas during a research trip to Spain.

Morgan Greig has always been interested in history, but it wasn't until his junior year as an undergraduate at the University of South Florida St. Petersburg campus that he discovered his focus.

He enrolled in a paleography course where he studied historical manuscripts and learned to read Spanish documents from the 16th century. It guided the trajectory of his academic career.

"It just took off from there," said Greig, who is now a graduate student in the Florida Studies program on the St. Petersburg campus. "I became really interested in early Spanish colonial history, particularly in North America."

Since then, Greig has traveled to Spain three times to conduct research with his professors and classmates. In August, he won the 2021 Leland Hawes Graduate Student Essay Prize in Florida Studies. The competition included entries from masters and doctoral students from all three USF campuses. A panel of scholars evaluate submissions on originality and quality of research, clarity of argument and contributions to the field of Florida history.

Greig’s award-winning paper, "Finding Soto: A Social Examination of the Hernando de Soto Expedition of Conquest to Florida, 1538-1543," focuses on the men and women who participated in this 16th century expedition to the Tampa Bay area. Greig received $1,000 and will have his essay published in Tampa Bay History, a peer-reviewed journal published jointly by the Tampa Bay History Center and USF Libraries.

"He's uncovered some incredible new material. It is cutting-edge stuff. I think the work he has done is going to change our assumptions about the people who participated in that expedition," said Michael Francis, the Hough Family Endowed Chair of Florida Studies at USF St. Petersburg campus.

Greig is using the prize money for a fourth trip to Spain that he left for on September 22. This time, he is going by himself and will look for additional source material for his master's thesis about the Hernando de Soto expedition. The three-month research project will involve working in archival collections in Badajoz, Zafra and Seville, Spain.

If all goes as planned, Greig hopes to one day have the work integrated into La Florida: The Interactive Digital Archive of the Americas. The project brings early Florida's diverse population to life through short videos, interactive maps and a searchable database housed at the USF St. Petersburg campus. Greig is fascinated by the content in the repository and wants others to learn about the history of early exploration of Florida.

"The field of Spanish colonial history, particularly pertaining to North America, is not taught in history books as much as British colonial history, so my work is connected to the La Florida project, which aims at bringing Spanish primary source information to the broader public," Greig said.

The digital archive was produced by Professor Francis, well-known for his groundbreaking research in early Spanish Florida and the executive director of La Florida. He is also the one who encouraged Greig to enroll in the paleography program at USF.

"It's a privilege to work with students like Morgan. He's dedicated and disciplined," Francis said. “When I have students like that, it brings so much delight to my work. Give them a skill set and off they go!"