The University of South Florida is home to nearly 4,700 international students from 140 different countries. We spoke to several of them on the St. Petersburg campus to hear about their experiences and what they overcame to study in America in the midst of a global pandemic.

International students coming to America for higher education already face many challenges. The visa process can be burdensome and it’s difficult to keep track of immigration laws that change with each new administration.

Once they arrive, the culture and educational system they enter into is usually quite different from what they know. Sometimes international students must adapt to new language, food and societal norms. Other times they are getting used to new subjects, collaborative educational experiences and work-life balances.

Adjustment can take time, but as USF St. Petersburg campus student Abdul Muqeet Khawaja from Pakistan said, “You don’t learn how to swim until you get in the water.”

Now throw in a global pandemic that created severe travel restrictions, overwhelmed health systems and made most educational settings virtual, and the last year and a half have been especially jarring for many international students. According to National Public Radio, colleges and universities saw a 20 percent drop in international students due to the pandemic.

“It was difficult to get here in the first place. Everything took much longer than expected,” said Cameron Burgess, a USF student from Trinidad and Tobago. “Health systems in Trinidad were overwhelmed, so was really hard for me to get the medical forms I needed and that especially made me worry since I needed the health forms for housing and thought housing would fill up.”

We talked with several students on the St. Petersburg campus to hear about their experiences and what they overcame to study in America in the midst of a global pandemic. These interviews have been edited for length. 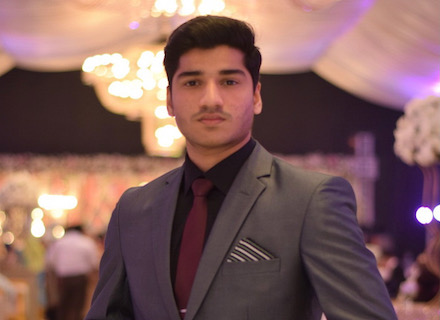 I’m from Pakistan in South Asia. It’s a beautiful country with plains, deserts and mountains. Pakistan gets a lot of adventurous people who are looking for an escape. We have the world’s second-highest mountain called K2 in the north. The central region of Pakistan is surrounded by desert and you can do off-road races and treks, which invites a lot of international tourists. The southern region connects to the Arabian Sea, so just a lot to do outdoors. As for our culture, it has been enriched by the Mughals and the Sikhs. The historical architecture spreads from mosques to temples. Also Pakistan knits together a plethora of religions, but also offers a myriad of spicy dishes that attracted the East India Company to the subcontinent for trading.

Prior to coming to the United States and USF, what expectations did you have for your college experience?

First and foremost, that college would bring a lot of stress with the new environment and keeping a good academic standing. But if you learn how to find the right balance of academics with social life, you won’t get stressed out too much. You don’t learn how to swim until you get in the water. That’s kind of been my experience here and now I feel I have a good balance of academics, a job and social life.

How did you decide on the USF St. Petersburg campus?

I got into both USF Tampa and St. Petersburg. But the St. Petersburg campus had a much more tight-knit community with smaller class sizes that I thought would benefit me academically. I felt I could get to know other students and my professors more quickly and just thought it would be an easier adjustment overall. And the St. Petersburg area was so appealing, just a lot to do and discover here.

Getting a visa was much harder, things were really delayed. I was quite uncertain if I was going to get a visa for my studies, and if I didn’t get that, then I wouldn’t have been able to come. Then there was the hurdle of various medical tests and vaccinations that needed to get done and were required to be able to get into the country. Even after that, I had a limited number of options to get from Pakistan to the U.S due to travel restrictions. I had to travel 26 hours to get from Pakistan to the U.S., all with the fear of contracting COVID during the flight and if that happened, then quarantining alone.

How has the university, faculty or fellow students helped you deal with this challenge?

The Office of International Services has really helped me out a lot with getting paperwork accomplished and other things that has kept me on track. Student Health Services was really great for helping me get all the medical records completed. And then coming into the U.S. for the first time, I was not familiar with how things worked necessarily. I think interaction with my roommate has been huge. He really helped me get used to my new environment. Just doing things like going to the grocery store and socializing with his friends has been a perfect opportunity to integrate into the community.

What has been the most surprising or most unexpected aspect about your experience so far?

Coming from South Asia, things are done in a different way than in the U.S., like driving on the other side of the road. That took some getting used to. Besides that, I come from a different culture and race, but people here don’t make assumptions about me. I really felt acknowledged and accommodated and that people were listening to me. 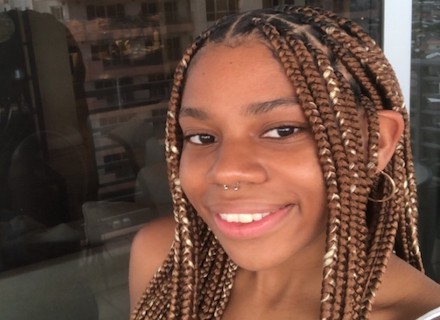 I’m from Trinidad & Tobago but grew up as an ex-pat. Born in Trinidad and then moved to England, and then to Malaysia, and then the UAE (United Arab Emirates) and then the last four years back in Trinidad. My dad is in the oil and gas industry, so we went where his job took us. It has been a great experience to see so much of the world.

Prior to coming to the United States and USF, what expectations did you have for your college experience here?

I kind of thought it would be just like the movies, going to football games and stuff, which it kind of has been as I have been to USF football. College in the states always seemed a lot more freeing, where you have the space to find yourself. There’s much more focus on student life here.

What has been the biggest challenge for you to overcome being an international student?

Just missing my family. All of my roommates are from Florida, so they know they are just a drive away when they want to see their parents. Whereas I won’t be able to see my family until the semester ends.

It was kind of difficult to get here in the first place. Trinidad had been in lockdown since May, so it was a production to just get out of the country. I had to move here with my aunt but not my immediate family. I expected my family to help move me into college but due to travel restrictions that was not possible. The visa application took longer than expected. Also because of the pandemic, the health systems in Trinidad was overwhelmed, and it was really hard for me to get the medical forms I needed. It especially made me worry since I needed the health forms for housing and thought housing would fill up.

What has been the most surprising or most unexpected aspect about your experience so far?

I think just the city of St. Pete has been a surprise. Florida doesn’t have a good reputation internationally with the amount of headlines you see about crazy stuff happening. But St. Pete has been so nice, love the area and everyone seems so friendly. 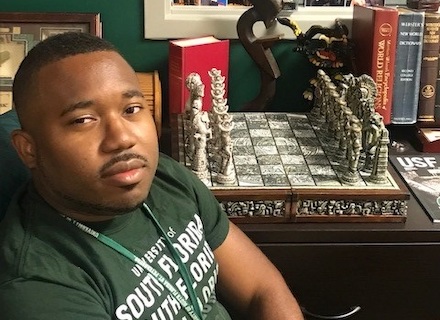 Growing up in Jamaica is very different than the U.S. personality wise. I find that you are closer to people back home. It’s easier to make conversations back home in general, though at the St. Pete campus, it’s been more like that. The vibe and energy of Jamaica, I don’t know how to describe it. Always something going on.

Why did you want to come to school in the United States and how did you decide on USF St. Petersburg campus?

I wanted to come to school for the opportunities I knew it would provide. There’s the chance to earn more here. I don’t come from a particularly rich home, and this would help me take care of my family. Also, I’m a transfer student and started out at Hillsborough Community College. I chose it because of the lower tuition. I wanted to go with a more inexpensive option, but not lose out on quality. Then with the partnership between HCC and USF, USF was the next step. I liked both the school and the campus.

What has been the biggest challenge for you to overcome being an international student?

Getting involved. I am a person who likes to get involved, but I shy away from a lot of stuff because I don’t necessarily like the spotlight. I had to get over that, especially when you arrive and don’t know anyone. I have to get to know people and reach out. I had to push myself to be out there and meet new people like faculty and students so I can be successful.

How has the university, faculty or fellow students helped you say deal with these challenges?

Student Life & Engagement in particular has been extremely helpful. They were the first group of people I really got to know. They were a great support to me when trying to sort my health insurance situation out.

It has in two ways primarily. Definitely switching from in person to online was difficult in the beginning stages. Also, my father had his hours cut because of the pandemic, he works at an airport back home, and that was difficult because it brought a lot of financial difficulties for my family. The pandemic did shake things up for me quite a bit.

Anything else you like to add about being an international student or your experience here so far?

It is great here at USF. I’m really happy to be here and there is a lot of help available. I do wish there was more help available financially, as much as there is with helping students academically. It is hard for international students to come up with all funds for health insurance, housing, etc.