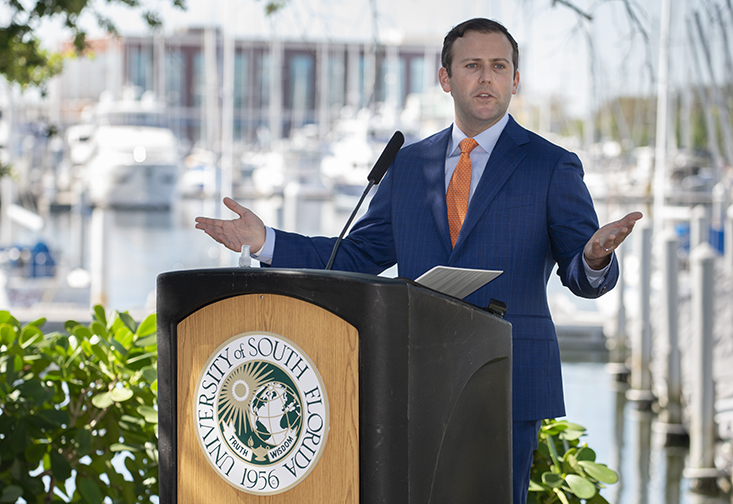 Florida House Speaker Chris Sprowls visited the University of South Florida’s St. Petersburg campus to announce a broad legislative package that would designate $100 million per year to offset the effects of flooding and sea level rise in the state.

Using the campus’ picturesque waterfront as a backdrop, Sprowls, R-Palm Harbor, a USF alumnus, outlined his vision before a group of lawmakers, university leaders and members of the media.

“As a low-lying state surrounded by water on three sides, Florida is particularly vulnerable to the risk of flooding,” he said. “With sea level rise, we are seeing that risk grow exponentially - from storm surge and tidal flooding to groundwater and flash flooding - the impacts are devastating.”

USF President Steven Currall voiced the university’s support for the suite of bills and said Sprowls could not have selected a more appropriate location to announce legislation focused on protecting the state’s citizens and shorelines.

“Given USF’s expertise and ideal location, we stand ready to assist this important effort for our state in any way we can,” Currall said.

The centerpiece of the package is a proposed committee bill to be commonly known as the “Always Ready: Flooding & Sea Level Rise Act.”

The steps outlined by the legislation include:

Also introduced is a proposal that would offer property tax breaks to any homeowner when the property is elevated to increase its resistance to flooding and sea level rise. Under the legislation, the added value to the property from the elevation would not be considered for property tax assessment purposes.

“For years, the danger of devastating flood damage to homes and businesses has flown under the radar of the legislation. This legislation puts real money and action toward addressing the problem,” said Senator Jeff Brandes, R-St. Petersburg, one of the proposal’s sponsors. “This is something that members of both chambers and both parties can agree on: It is irresponsible for us to sit and do nothing.”

Florida is home to seven of the ten cities with the largest property losses at risk from flooding. Sprowls also cited a study from the First Street Foundation that found nearly one million residential properties are at substantial risk of flooding in Florida, which are expected to have a collective loss of nearly $8 million this year.

“To meet the challenges of flooding and sea level rise, we must ensure that our communities are better prepared for the future,” said Sprowls. “This legislation will protect Floridians, their homes, and the businesses that drive our growing economy. Together, we can build a stronger and more resilient Florida.”