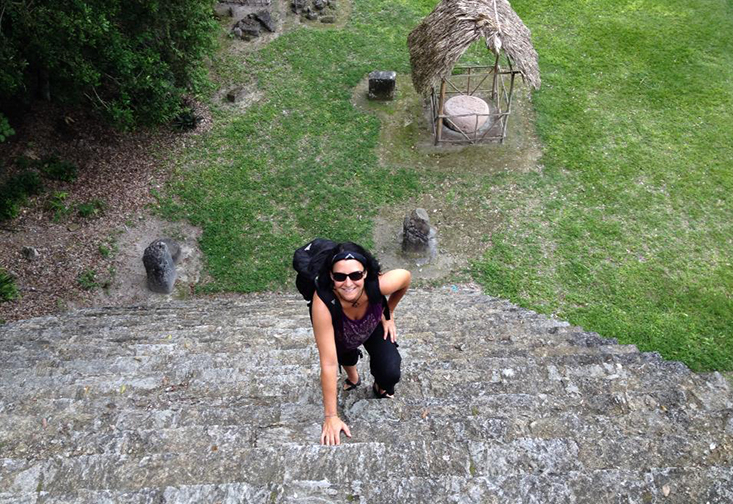 Singleton climbing a Mesoamerican pyramids during an archeological dig.

Lori Singleton had an unconventional path towards USF’s St. Petersburg campus, but she wouldn’t have it any other way. For more than 20 years, Singleton worked as an EMT and a firefighter in Tampa Bay, one of the first openly gay women to serve at her department. After she retired longevity – a term used in the firefighting community meaning to complete service, as opposed to retiring from an injury – Singleton decided to fulfill a lifelong dream of travel, which included walking the famed Camino de Santiago pilgrimage trail in Spain. Then in 2013, she enrolled as an anthropology major at USF’s St. Petersburg campus, which gave her the opportunity to join excavations in Mesoamerica and participate in the Belize Valley Archeological Reconnaissance.

Singelton in Ireland during her four-month backpacking journey through Europe. Photos courtesy of Lori Singleton.

Since graduating in 2015, Singleton has dedicated herself to philanthropy, providing food for those in need and launching a nonprofit called The Way Project that aspires to inspire goodwill in others.

We caught up with Singleton to hear about her promise to a dying parent to earn her bachelor’s degree, how it shaped her future decisions and why she’s devoted to giving back to the community. This interview has been edited for length.

What first brought you to USF’s St. Petersburg campus?

I retired longevity from Tampa Fire Rescue in 2012, almost a year after my mom passed away from cancer which was, needless to say, life changing. Before she died, I promised her that I would go back to school and graduate with a bachelor’s. I chose anthropology because she once told me that if she had to do it all over again, she would have become an anthropologist.

So, off I went on my quest to fulfill a promise, which landed me in USF’s St. Pete campus anthropology department. I can’t begin to tell you just how fortunate I feel to have picked the St. Pete campus. Not only is it in the middle of a fantastic downtown, but the campus is intimate and engaging. It’s super easy to make friends there and at the age of 46, I really appreciated that. It was an incredible two years.

What sort of things did you study as an anthropology student?

I learned so much about so many different cultures and was able to do things like study abroad in Belize for the summer digging up old Maya artifacts and ruins. While some of my favorite classes were Dr. Dixon’s classes, there wasn’t a class I didn’t love or appreciate. In fact, one of those classes asked us to do a project highlighting a local organization. I chose the nonprofit Daystar Life Center because I typically did papers and projects on various cultures’ religious beliefs and Daystar was founded as a catholic ministry.

I spent a semester volunteering for them and interviewing people that were part of the organization. What impressed me the most about Daystar was just how many people I met there who were also volunteers. Many people were from a local catholic church and this was their way of giving back. Boy, did they inspire me.

What did you do after you earned your degree?

After I graduated with honors, fulfilling my promise to my mother, I went on my long-dreamed-about four-month backpacking trip around Europe. One of the things I was most excited about was getting to walk the Camino de Santiago, also known as the Way of St. James, for the second time. The first time I walked it, right after retiring, I experienced a type of generosity I’ve only ever known on the Camino. No matter what your language is, what your story is, if you are in need on The Way of St. James, someone will be there to help. This inspired me as well.

Fast forward to today and I am happily married to my beautiful wife, who is also a USF graduate, and, like me, believes in trying to make a difference in our own part of the world. She worked for a nonprofit organization for 27 years before retiring to join me in chasing after a little dream that duplicates what I experienced on the Camino and resembles what I witnessed at Daystar. We put my mom’s old fold up table in our front yard and with $50 worth of non-perishable food to share with our neighbors in need. We called it The Giving Table.

Truthfully, we only expected to do it one time. My sister-in-law had unexpectedly sent us a $50 gift card to Amazon and Tara and I decided to buy food for a table to give away. Because I wasn’t planning on manning the table, I made a sign out of a cardboard box that said, “Take what you need. Leave what you can.” Not only were people who came to the table incredibly generous by only taking what they needed, as soon as I posted it on Facebook, we immediately had friends and family donating money to resupply the table. We have resupplied the table almost 10 times in just a few months.

What have been some of your most memorable moments with The Giving Table?

One of my favorite moments so far was discovering that a homeless man left food on the table to share. I couldn’t help but think how incredible it is to see someone who has so little choose to share what little he has with others. My friend Maria, who is a Franciscan Nun on the Faroe Islands, said it was because he understands what it’s like to be hungry.

I’m happy to say that we have officially formed a nonprofit, The Way Project. Our wish for The Way Project is not one of grandiosity. Our goal is simply to inspire and show people how easy it is to help people in their own part of the world. If someone is inspired to donate to our table, we are committed to using every dime of that donation towards the purchase of food. We would love to see a world where generosity is more common than greed.