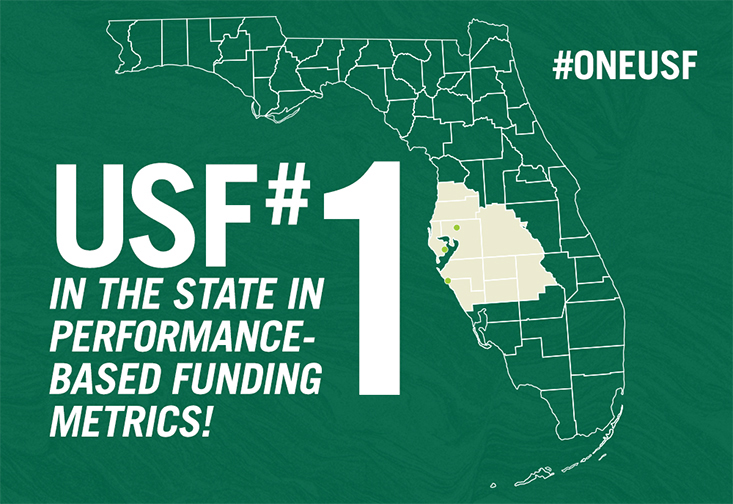 The University of South Florida (USF) leads all state universities in performance-based funding scores for 2020, according to data released today during a meeting of the Florida Board of Governors (BOG).

USF placed first in the state compared to other universities in a series of 10 student success-based metrics established by the BOG that focus on affordable access, graduating students at a high rate, with minimal debt, and preparing them for high-skilled, high-paying jobs in high-demand fields.

“The University of South Florida community should be immensely proud of our success in the state’s performance-based funding model. Our achievements are truly a reflection of the dedicated work of our students, faculty and staff,” USF President Steven Currall said. “Our performance on benchmarks such as graduation rates, student access and the number of students employed after earning a degree underscores my belief that USF is where academic excellence converges with opportunity for our students. Our performance-based funding milestones advance our goal of becoming a top 25 public university.”

USF earned the highest score in the state in the following categories, according to the BOG’s formula (includes ties):

“Congratulations to the University of South Florida on achieving its highest performance-based funding score to date and top score for the State University System,” said Brian Lamb, vice chair of the Board of Governors and chair of the BOG’s Budget and Finance Committee. “Thank you to the Governor and the legislature for their unwavering support of the State University System. USF’s upward trajectory has been outstanding. This is a testament to the dedication of excellence from the students, faculty and leadership of the institution. I look forward to their continued success.”

USF has been a consistent leader in the state’s performance-based funding model, which takes into account the metrics of all three USF campuses, since the system was implemented in 2014.

“Leading all state universities in this year’s performance metrics is another example of how the University of South Florida’s focus on strategic goals can produce record-breaking results,” USF Board of Trustees Chair Jordan Zimmerman said. “This achievement, especially as our university goes through a transition during consolidation, shows why USF is widely considered a national model for student success.”

Under the BOG’s performance-based funding system, USF will receive a share of performance funds after Gov. Ron DeSantis signs this year’s state budget.

“Congratulations to the students, faculty and administration of the University of South Florida in receiving top marks in Florida’s State University System performance-based funding metrics. Their score reflects USF’s deep commitment to excellence both as an academic and a public institution,” incoming Florida House Speaker Chris Sprowls said.

This achievement builds on USF’s reputation as a national leader in student success, as seen by U.S. News and World Report placing USF inside the top 50 in its most recent rankings of best public universities.

“Leading the state in performance funding scores represents another outstanding achievement from USF. Having a university of this caliber in the Tampa Bay region is critical in recruiting and retaining the nation’s top talent to our state,” incoming Florida Senate President Wilton Simpson said.