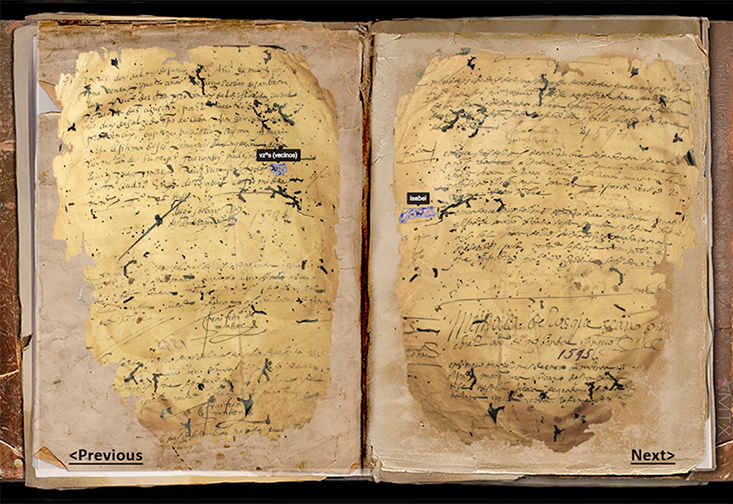 La Florida: The Interactive Digital Archives of the Americas housed at the University of South Florida St. Petersburg received a $250,000 major initiatives grant from the National Archives.

The grant will go towards a new La Florida initiative titled “Europeans, Indians, and Africans: Lost Voices from America’s Oldest Parish Archive, 1594-1821,” which is designed to make St. Augustine’s diocesan archives accessible to a global audience. These ecclesiastical records, which number around 9,000 handwritten documents, provide rare insight into the daily lives and relationships of the multi-ethnic population of Europeans, Africans and Native American residents that comprised the oldest continuously inhabited European settlement in the continental U.S.

The work from this collaborative initiative will be featured on the La Florida digital platform, allowing teachers, students, scholars and the general public to view, conduct detailed searches on individuals and demographic changes and create custom infographics from the entire collection.

“Receiving this grant from the National Archives reinforces that we have a project here and Florida has a history that speaks to an audience that is much broader than the state, and resonates with a national and a global audience,” said Dr. J. Michael Francis, executive director of La Florida and the Hough Family endowed chair of Florida Studies at USF St. Petersburg. “It is a testament to just how fascinating these records are.”

Piecing together clues about the little-known lives of Native Americans, free and enslaved Africans, and “conquistadors” from Spain, Portugal, Germany, Ireland and elsewhere, La Florida brings early Florida’s diverse population to life through short videos, interactive maps and a searchable population database. It weaves together the lives and events of more than three centuries of Florida’s colonial past, from Juan Ponce de León’s 1513 expedition to 1821, when Florida became a U.S. territory.

Francis and his team work with academic and cultural institutions to comb through thousands of pages of original documents in archives in Spain, Italy, England, Mexico and the United States. The two-year “Lost Voices” initiative will build on the expertise of paleographers, historians and translators to transcribe and translate the entire collection of St. Augustine’s colonial ecclesiastical documents, which are largely written in Spanish, along with hundreds of Latin documents. 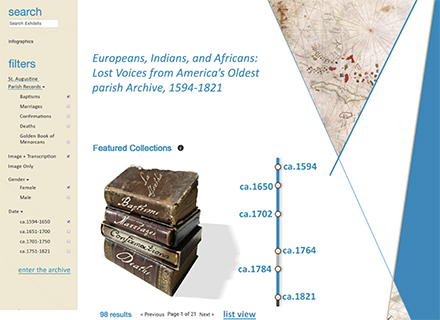 Teachers, students, scholars and the general public will be able to view, conduct detailed searches on individuals and demographic changes and create custom infographics from the entire collection.

“History books are never written about common people that were the fabric of a community, but that in a sense is what the La Florida project is doing for St. Augustine,” said Father Tom Willis, the pastor of the Cathedral Basilica of St. Augustine, America’s first parish.

The collection includes baptism, confirmation, marriage and death records, including a 1598 baptism entry of a German-Native American child named Lucas, the oldest recorded mixed-race baptism in any region of what would become the United States. Other documents identify the names of dozens of runaway slaves who risked their lives to escape English plantations in search of freedom in Spanish Florida.

“These records give us biographical sketches and can help us track individuals through time. When combined with other records from Florida and Spain, we can flesh out stories of individuals that hardly ever appear in historical records, such as women and Native Americans and free and enslaved African Americans,” explained Francis.

Some of the individuals recorded in the parish records were buried in St. Augustine’s historic Tolomato Cemetery. “Lost Voices” will enable historians to connect individuals in the cemetery to their actual historical records and start geotagging events in those individuals’ lives. The people documented in these records will also be added to a searchable population database, allowing users to link individuals to the original records in which they appear.

The “Lost Voices” initiative got its start several years before, when former USFSP graduate students Arthur Tarratus and Saber Gray worked with Sister Catherine Bitzer, SSJ, archivist of the Archives of the Diocese of St. Augustine, to photograph and digitize the collection of St. Augustine’s colonial ecclesiastical documents. Tarratus and Gray would traveled to St. Augustine at least once a month for nearly a year and a half to spend their days and even some evenings in the parish archives.

“We were working with boxes filled with loose leaf documents that may or may not have been in chronological order. Some had worm holes, with others the old Spanish handwriting was unreadable, but our job was to try and make sense of this collection as best we could,” said Gray. 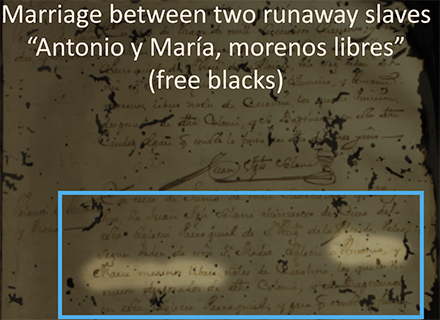 The collection includes baptism, confirmation, marriage and death records, as well as identify the names of dozens of runaway slaves who risked their lives to escape English plantations in search of freedom in Spanish Florida.

They would carefully handle and photograph the fragile, historical records, making sure the light was right so the handwriting was legible and could be translated and transcribed at a later date.

Gray said it took much longer than they ever thought it would, but they kept with it because of the importance of this history.

“People always think about Virginia and Massachusetts [in early colonial history], and never Florida because it was a Spanish colony,” said Gray. “But Florida was really the first place where Africans and Native Americans were incorporated into society with Europeans and you have a blending that occurs in St. Augustine before anywhere else.”

Out of 20 nationwide proposals, La Florida was one of only four to receive grant funding from the National Archives’ Access to Historical Records: Archival Projects program. The grant program supports projects that promote access to America’s historical records to encourage understanding of democracy, history and culture.

“I was born and raised here in St. Augustine, so I have always had a loving connection with St. Augustine history. And what Michael and this project have done is brought it alive in so many wonderful ways,” said Willis.