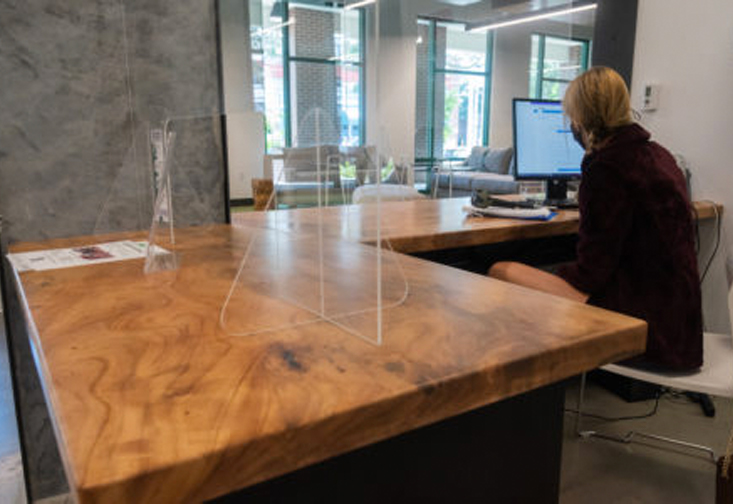 The reception desk in Osprey Suites is made from salvaged wood.

As the first students moved into Osprey Suites earlier this semester, welcoming them into the new residence hall were furniture and design features made of reclaimed wood. The wood was salvaged lumber from oak trees that were removed during construction of the sustainable, LEED-certified building.

USF’s St. Petersburg campus is giving new life to live oak trees. When new buildings go up, the campus works with a local cooperative to turn the wood from trees that have to be removed into sustainably produced furniture and other key components of the architecture.

“The whole goal behind salvaging these trees is our belief in sustainability,” said Ed Lewis, assistant director of planning and construction at USF’s St. Petersburg campus. “In the past, the wood would be chopped up and burned, and we wouldn’t see the benefits of it. Now we reclaim this timber for future use.”

Utilizing reclaimed wood began with the construction of Lynn Pippenger Hall (LPH), home of the Kate Tiedemann School of Business and Finance, which was completed in 2017. Wood from a number of oak trees was salvaged from the parking lot that became part of the building’s construction site. After the trees were removed, Viable Lumber, a local tree recovery and recycling cooperative, cut the trunks into large slabs, which have since been turned into stump tables, commemorative wall features and a boardroom table in the LPH Dean’s Suite. After its construction, LPH received LEED Gold certification, the most widely used green building rating system in the world.

During the construction of Osprey Suites, the 125,000-square-foot residence hall that opened this August, campus administrators set out again to promote sustainability by salvaging some of the trees that had to be removed and implementing a program to replant trees around campus. Osprey’s reception counter and tables in communal spaces were constructed out of reclaimed wood.

Reclaimed wood used in a commemorative wall feature in LPH.

“Throughout the project we were committed to increasing our LEED certification for this building, knowing that this campus has a rich history of being committed to sustainability,” said Byron Green, associate director of housing and residential education at USF’s St. Petersburg campus. “While the LEED certification was the impetus for replanting the trees, the idea around making the older trees into table tops was really in the spirit of sustainability.”

The Office of Sustainability is making its own efforts to preserve the arboreal aesthetic on USF’s St. Petersburg campus. A tree inventory and mapping program tasks students with helping identify, measure and catalog campus trees. The goal is to create a map and a database with the information collected for each tree, which will be used in developing plans to diversify tree populations and expand canopy cover. This project is in collaboration with the City of St. Petersburg, USF Tampa campus and Tree Campus USA, an Arbor Day Foundation program that helps colleges and universities establish and sustain healthy community forests.

Salvaging trees has a positive environmental impact and makes for a better campus environment, according to Lewis. ”The wood gives more of a nice, rich feeling than steel and concrete,” he said.

For Green, the process of salvaging wood from trees that for so long provided shade for the campus allows for their lives to carry on.

“We wanted to have a bit of a memorial to these old trees, so they could continue to live on,” he said. “The trees are able to serve a new purpose now that they’re reused and recycled.”