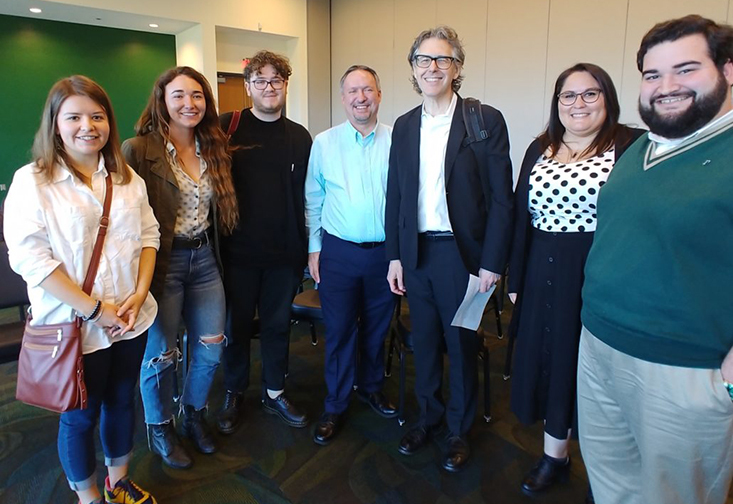 The creator, producer and host of National Public Radio’s (NPR) iconic weekly program This American Life paid a visit to USF St. Petersburg on Saturday afternoon, conducting a master class in the art of storytelling to a room full of aspiring journalists and podcasters.

Ira Glass, who was in town for a talk at the Mahaffey Theater that night, spent more than an hour and a half describing some of the key lessons he has learned during his illustrious career in radio. Throughout the intimate class session, Glass asked students about their professional goals, fielded questions on how stories are developed for his show and gave advice on conducting a great interview and what makes a successful podcast.

“You want to pursue the things you are interested in when telling stories. The best shows that we do are the ones where a staff member is just obsessed about a topic,” said Glass. 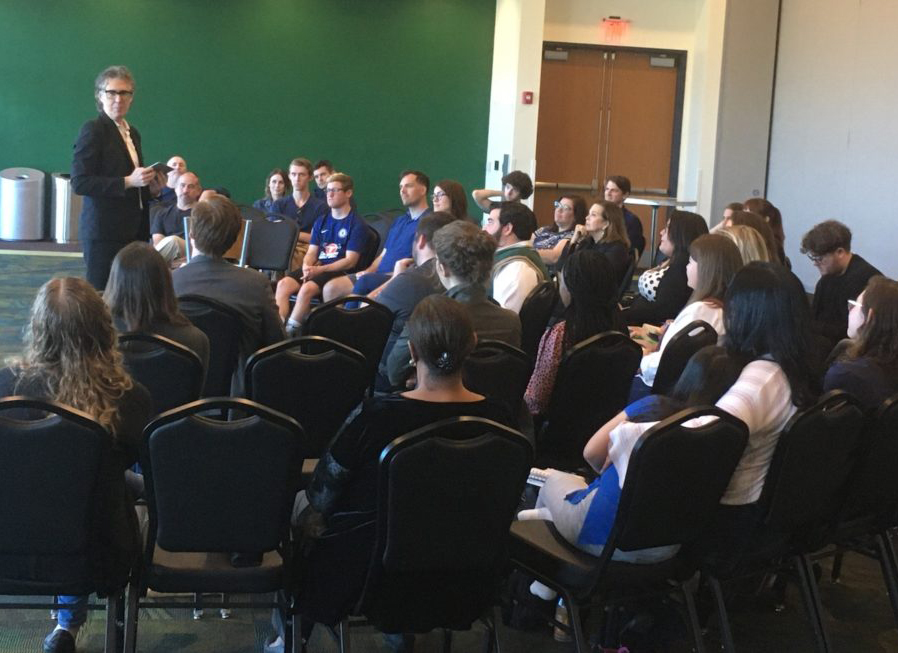 Ira Glass described some of the key lessons he has learned during his illustrious career in radio to a roomful of students and faculty on Saturday afternoon.

Glass used a tablet to mix and play audio clips from This American Life to highlight particular points during the session. He emphasized the importance of developing a compelling narrative, using audio to induce “driveway moments,” in which listeners are so captivated by a story that they won’t turn off the radio – even if they’re already home.

Glass began his career as an intern for NPR in 1978 at the age of 19 and worked on nearly every news program for the station during his career. He admitted he was not a good writer for years, and would pay experienced reporters to edit his copy so he could learn from their craft. Glass eventually developed his signature storytelling and interviewing style, blending seriousness with humor, to showcase both the consequential and mundane stories in life.

“Don’t be scared to be funny. If something funny occurs, get it in the story,” said Glass.

This American Life is a groundbreaking radio program that uses narrative journalism to explore major issues in society and personal dramas. Each week it builds an hour-long program of stories – from the tragic to the absurd – around a particular theme. Past shows have explored other universes, the housing crisis, Guantanamo Bay, even what superpowers people wish they possessed.

The radio program’s unique format, which has been on the air since 1995, has influenced a generation of podcasts and programs, including Radiolab and Serial, the latter produced by Glass. The show is broadcasted on more than 500 public radio stations to more than 2.2 million listeners. Its podcast is downloaded by even more listeners each week. Since its initial launch, This American Life has earned six Peabody awards, the highest honors of broadcasting and journalistic excellence.

Glass closed out his mostly light-hearted talk on a serious note. He told the aspiring journalists and storytellers that we are witnessing a “war on truth” these days, a war between facts and propaganda.

“It’s an important time to be a reporter, to be about the truth,” he said. “And we could use more people.”