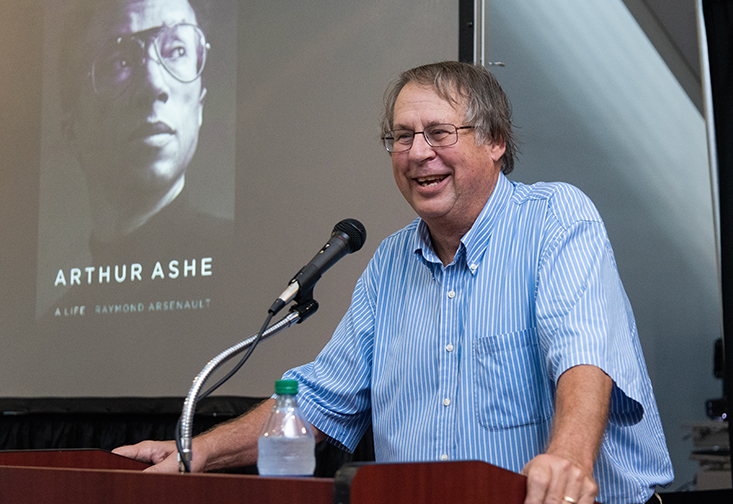 Historian Ray Arsenault was taken aback the first time he arrived on the USF St. Petersburg campus in 1980.

After four years of teaching at one of the biggest universities in the country, the University of Minnesota, Arsenault took a chance on a professorship at a small regional campus in a resort town on the Florida Gulf coast.

“All my Minnesota colleagues thought I was crazy to leave. But my Florida-born wife hated the winters,” said Arsenault. “When we arrived, the campus was so small. Davis Hall hadn’t opened and there wasn’t even a separate library building. I’d never seen any other university like it.”

But Arsenault, who graduated from Princeton and received his PhD from Brandeis University, fell in love with St. Petersburg and the campus community. “The campus perfectly reflected and fit in with the spirit of the city. It felt like a place that could grow into something special.”

Over the next four decades, Arsenault compiled a remarkable record as a teacher and historian of civil rights and the South, while playing a vital role in the transformation of the USF campus by the bay. He plans to retire from USF at the end of the 2020 fall semester.

Arsenault has been a constant champion and a faculty leader of the campus as it has grown in students, buildings, academic programs and reputation, transforming as the city evolved into a hub for the arts, culture and education. He became one of the most beloved teachers at USF during his tenure as the John Hope Franklin Professor of Southern History and co-founded the interdisciplinary Florida Studies graduate program that gives students the opportunity to explore the history, environment and politics that highlight Florida’s critical role in regional and national affairs.

“One of the reasons why I stayed here pretty much all of my career was the community feel and beauty of this place, a perfect small liberal arts college,” said Arsenault. “I feel very fortunate to have ended up in such a welcoming place to live and raise two daughters – an environment where I was fully supported by administration and colleagues to pursue my teaching, research and community service.”

That service included consulting for national and local museums such as the National Museum of African American History and Culture in Washington D.C. and St. Petersburg’s own Carter G. Woodson African-American History Museum that he helped to found, serving a term as Florida president of the American Civil Liberties Union and becoming the city’s de-facto “public intellectual guy” due to his popular book “St. Petersburg and the Florida Dream, 1888-1950.” After the book’s publication in 1988, he was asked to serve on countless city committees and boards.

Arsenault is best known as one of the most celebrated historians of the civil rights movement, writing an authoritative history of the Freedom Riders, a group of hundreds of civil rights activists who in 1961 assembled on buses and trains and headed into the Deep South to fight against the segregation of interstate travel. He also wrote a book on Marian Anderson, the great African American singer, and her fight to sing at Washington, D.C.’s Constitution Hall in 1939. More recently, Arsenault authored the first comprehensive biography of tennis legend Arthur Ashe, charting Ashe’s transformation from a shy African-American boy from segregated Virginia to a cosmopolitan human rights advocate who transformed the world of sports and activism.

“I always wanted to write for a broader audience as I see my books as an extension of my teaching. And starting with ‘Freedom Riders’ I got into a habit of writing big books that take eight to nine years to complete,” Arsenault said with a chuckle.

The history of the Freedom Riders became a much bigger project, and sensation, than Arsenault could have ever imagined. He spent nearly eight years researching the events of 1961 and interviewing more than 200 individuals who took part in the rides.

Following the book’s publication in 2006, he collaborated with the noted African American documentary filmmaker Stanley Nelson to produce the two-hour PBS American Experience documentary “Freedom Riders”, which went on to win three Emmys and a George Peabody award and become part of the National Endowment for the Humanities’ We the People project. It also landed Arsenault a seat on the set of Oprah Winfrey’s talk show along with several Freedom Riders – with another 180 Freedom Riders in the studio audience – to celebrate the 50th anniversary of the rides.

“They believed in racial justice and nonviolent struggle so deeply that they were willing to die for their cause,” said Arsenault when asked why the story of the Freedom Riders continues to resonate today. “They wanted freedom now, not later.”

Arsenault’s book on Marian Anderson is the basis for a PBS American Masters documentary to be broadcast in 2022, and he is under contract with a Hollywood studio to produce a major film on Arthur Ashe based on his biography.

“I’m proud that I threw myself into and somehow managed to complete these challenging projects,” he said. “So many people have told me reading my books made them feel empowered. They thank me for bringing these stories of courageous activism to light. I feel honored to be part of the community of scholars that works on race, civil rights and social justice.”

Arsenault looks forward to his retirement and plans to spend more time with his family, including two young grandchildren ‘Lincoln and Poppy’ who live in Washington D.C. But he will still be a presence on a campus and in a community he has given so much to and received so much from.

“St. Petersburg has given me a sense of place, an identity,” Arsenault explained. “I never lived anywhere more than five years before coming here. I’ve been here 41 years now, and it has become my home. I have developed such a deep affection for the city and this campus. All the students and colleagues who have worked and studied here have a lot to be proud of in making this place what it is.”

And though he says he is slowing down, Arsenault is still pursuing social justice and still writing, set to begin work on his eleventh book, a biography of the late John Lewis, the U.S. Representative and Freedom Rider whom he was privileged to know and befriend.

The book, Arsenault promises, will be relatively short, giving him plenty of time to enjoy other retirement adventures.