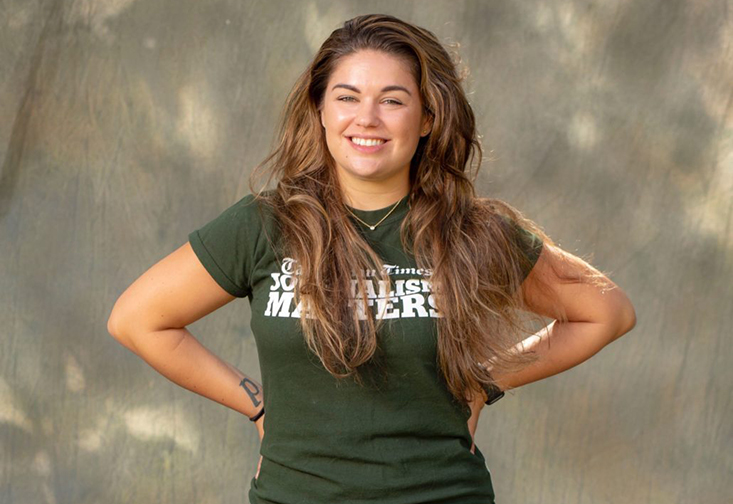 Alumni Tara McCarty was recently hired as a designer at The Washington Post, and joined the team on May 4. Photo by Boyzell Hosey of the Tampa Bay Times.

For Tara McCarty, designing the news is like playing a game of Tetris. Her job is to make all the different elements of a newspaper – headlines, text, pictures, graphics and color – fit together seamlessly.

“Is there a color that works best for this story? What elements work to piece it all together to make it flow?” said McCarty. “It is about taking the time and thinking about what makes the most sense.”

For the last eight years, McCarty has been a designer at the Tampa Bay Times, where she currently serves as the print design director. Sometimes she spends days laying out a major feature, other times she has just minutes to react to breaking news, with the goal of putting together page designs that tell the story of the day’s happenings.

McCarty was recently hired as a designer at The Washington Post, and joins the team on May 4.

We talked with McCarty, who graduated from USF St. Petersburg in 2012, to hear about her exciting new position in Washington D.C., working in journalism during a pandemic and some of the most valuable lessons she learned being a staff member of USF St. Petersburg’s student newspaper The Crow’s Nest. This interview has been edited for length.

Congratulations on your new job. Can you tell me more about what you will be doing at The Washington Post and the major differences between working at a national publication versus a more regional paper such as the Tampa Bay Times?

I was hired on as a designer, and I think most likely I’ll be designing news pages as opposed to sports or travel. The Post has 30 designers on its team, where the Times has eight. Also, the designers at the Post work on both print and digital, so I’ll need to learn some coding for sure. That will be a challenge but also a lot of fun.

I think the biggest change will be the responsibilities. At the Times, I was basically running a portion of the design department. With the Post, I won’t have that managerial role, I’ll be more focused on the work. Another major change will just be the scale. The Post usually has hundreds of people in the newsroom. There is just a lot more ground to cover and a lot more projects to work on.

What got you interested in journalism and working in news design?

I’ve wanted to be a journalist since I was 10 years old. I remember going to Enterprise Village, which is a like a little fake town in Largo made up of all these businesses that are sponsored by real local businesses. There was a Publix and a local bank and, at the time, the St. Petersburg Times (the previous name of the Tampa Bay Times). And the students would be assigned a job and have to “live” in this town for a day. I worked at the St. Petersburg Times as a reporter.

When I got to high school, though, I got really anxious talking to complete strangers. I didn’t want to have those conversations and ask people questions, which is essential as a reporter. I discovered design when I worked on the school’s yearbook and I became hooked. When I went to college, I took every single design and illustration course that I could.

What has it been like working in a newsroom during the coronavirus pandemic?

It has been really hard because in a newsroom there are always people around asking questions, having meetings or conducting interviews. Working remotely has been a drastic change, but it’s a good thing the Times’ newsroom is so tight-knit. There are daily calls, a morning brainstorm meeting, then an afternoon news meeting, all done through internet services. Technology is heavily relied upon so everyone is on the same page. The newsroom is lucky to be able to work together well, especially apart.

Even though it’s a crazy thing being covered, the pandemic is also something those in the newsroom are living through, and I know people at the Times are doing everything that they can to keep the community informed.

What made you choose USF St. Petersburg?

While I knew what I wanted to do, I wasn’t sure where I wanted to go. I grew up in a single-parent home and didn’t want to strap my dad with expenses. I was terrified of loans and debt. My dad worked at USF St Pete and I basically grew up on campus. I knew it had a great journalism program and so I went to tour it. I met Bridget Nickens [now the executive assistant to the dean of the College of Arts & Sciences] whose husband works at the Times, and she was just so passionate about the program there and journalism. She helped convince me to apply. I got a ton of financial aid and then I didn’t have to worry about racking up debt through loans or moving away from home.

What were some of your most memorable moments here?

Well, it was good to go to a campus that has the Tavern for lunch and after-class drinks. I also really loved being a part of The Crow’s Nest. I was on the staff for three years in design roles.

Any student journalist at USF St. Petersburg should be working for The Crow’s Nest to get clips and experience. My routine on Monday would be to get a stack of the week’s newspapers and bring them to journalism professors to get feedback. I would go into Dr. Bob Dardenne’s office [then the chair of the journalism department] every Monday to talk about the paper, hear stories from his reporter days and chat about the news industry. I valued his thoughts. Even as I was waiting to hear back about the job at the Post, I asked myself, “what would Dardenne do?”

Any advice for current USF St. Pete students, especially during these trying times?

Ask for what you want. If you want a career in journalism, go find somebody to shadow. Go talk to your teachers. Call around places where you might be able to build connections. Get out into the community and go meet people. Things are not going to come to you. Come up with your stories and get the ball rolling on your own.

Journalism Professor Bob Dardenne was a major influence on McCarty. Dardenne passed away on Oct. 17, 2013, and every year she and another former student share a whiskey in his honor on that day. She also contributes to a memorial fund set up in Dardenne’s name, which helps support a USF St. Petersburg student through the journalism program. Support the fund here: Robert Dardenne Memorial Endowment