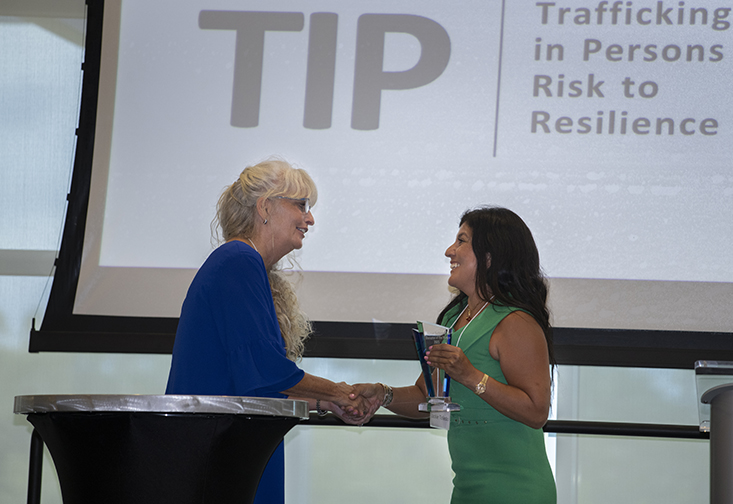 Professor Joan Reid presents an award to Rep. Jackie Toledo for her anti-human trafficking efforts in Florida during the grand opening of the TIP Lab in September 2021.

A new bill that aims to combat human trafficking would establish the Trafficking in Persons (TIP) Risk to Resilience Lab on USF’s St. Petersburg campus as the centralized repository for anonymous human trafficking data collected from law enforcement sources across the state.

“I said it last year, and I will say it again, we want to make sure the message is loud and clear that Florida is closed to human trafficking,” said Toledo. “House Bill 1439 will give our law enforcement partners the necessary tools not only to deter and prevent this horrendous crime but also to have the data they need to best address trafficking in their part of the state.”

The Human Trafficking Reduction Act seeks to ban hourly rates at motels and increase the penalties for first-time sex buyers from a first-degree misdemeanor to a third-degree felony. It also offers survivors the ability to petition to have their criminal records expunged if obtained while they were victims of trafficking.

In addition to the policy solutions, the legislation calls for establishing a statewide data repository for anonymous human trafficking data that will support law enforcement in their efforts to gather and collect data to better deter and detect trafficking across the state. The University of South Florida would house and operate the repository at its TIP Lab on the St. Petersburg campus.

“A key request from those on the front lines combatting human trafficking in Florida is for good, clean human trafficking data,” said Joan Reid, director of the TIP Lab. “Currently, the lack of good data means we are combatting human trafficking in the dark with no reliable information on where and how to address the problem. Accurate, complete data from a statewide data repository will provide crime trend identification, support law enforcement development of more specific interdiction strategies, close knowledge gaps and better position providers to address all survivor needs.”

As a mental health counselor for several years, Reid saw firsthand how young the victims were of human trafficking and the devasting effects on survivors. As she learned more about the issue, she started researching and collecting data on the prevalent illegal activity while becoming a criminology professor at the St. Petersburg campus. Reid is now a leading expert on the topic and has authored two books and more than 50 articles on the subject.

The TIP Lab is a collaboration among Reid and other professors at all three USF campuses that helps stakeholders, including non-profit groups, legislators and law enforcement agencies, by providing them with accurate data and resources about victims of human trafficking.

“Human trafficking is an illicit criminal enterprise that involves the exploitation of people in our local communities, states and internationally. The systematic collection and unification of data from various agencies are integral to facilitating the effective application of law enforcement resources to disrupt the human trafficking enterprise. We are grateful to Rep. Toledo for sponsoring this bill and her dedication to disrupting human trafficking in the State of Florida,” said Shelly Wagers, a criminology professor at USF’s St. Petersburg campus and former Largo police officer.

Florida currently ranks third in the United States based on the number of human trafficking hotline reports. Tampa Bay is considered a hotbed for child sex trafficking due to its vulnerable youth and influx of travelers.

“Human trafficking continues to burgeon, and throughout the world, it has become the second most profitable form of organized crime. An effective database is critical in understanding and dissecting the root causes to mitigate this horrific crime,” said Assistant Chief Lee Bercaw of the Tampa Police Department. “Having the enhanced ability to analyze human trafficking data and those crimes intersecting with human trafficking will bring our mitigation efforts to the next level. Housing this database in our backyard at USF’s TIP Lab will significantly improve our mitigation efforts and our ability to work proactively with our researchers, local, state, federal and private partners.”

HB 1439 is the latest piece of legislation from Rep. Toledo, who is considered a champion of the anti-trafficking movement. She was appointed to the Florida Statewide Council on Human Trafficking in December 2020. The following year, she passed a sweeping bill on human trafficking that streamlines advocate training, aids in the expungement of victims’ criminal records and strengthens the state’s role in the prosecution of trafficking cases to assume the role of victim, preventing the victim from reliving the trauma over and over again throughout the trial.