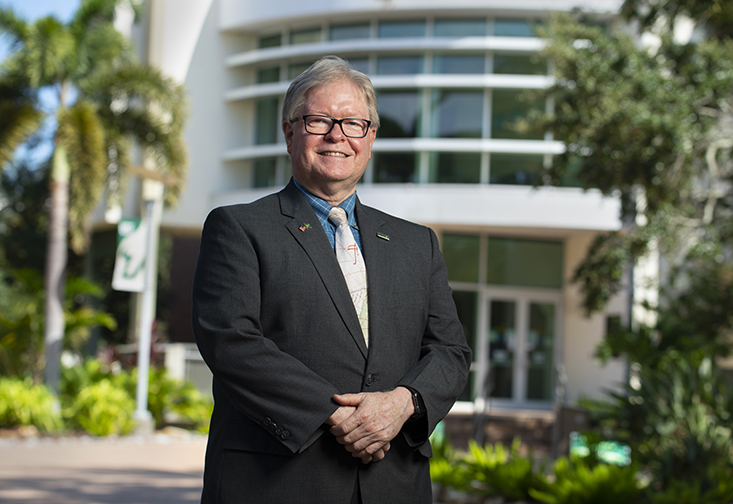 As regional chancellor of USF’s St. Petersburg campus, Martin Tadlock often talked about the financial struggles he encountered as a first-generation college student and how grateful he was for the scholarships that gave him the resources to complete his degree.

Now generations of students will be able to follow a similar path, thanks to a new scholarship named in Tadlock’s honor.

Called the Dr. Martin Tadlock Endowed Scholarship, it will be based on financial need and available to full or part-time first-generation undergraduate students, regardless of major, on the USF St. Petersburg campus. It will be renewable up to eight semesters.

The scholarship was created to honor Tadlock as he steps down from his position as USF St. Petersburg campus regional chancellor, a position he has held since August of 2018. It has already received more than $33,000 in funding.

Tadlock learned about the scholarship during a dinner held for him in downtown St. Petersburg, which was attended by donors who contributed to the fund.

“Martin, you changed the lives of so many,” said Stephanie Goforth, the former chair of the USF St. Petersburg Campus Advisory Board, who announced the scholarship during the event. “You will be missed. You have made an indelible impact on everyone at USF and in our community.”

Tadlock appeared momentarily stunned, and thanked the attendees for their generosity.

“This is for students and that’s what matters, more than anything else,” he said. “Thank you so much for that.”

Tadlock then went on to tell the story of a student whose life was changed because of her time at the USF St. Petersburg campus. The young woman, who was a student worker in his office, was battling mental and physical health problems when she first arrived on campus.

After struggling for more than a year, she got involved with Student Government and other on-campus activities. She made friends and started to feel more confident in her studies, Tadlock said. Now she’s pursuing a degree in nursing.

“That’s what it’s all about,” Tadlock added.

Jennifer McAfee, USF senior associate vice president for development, said the scholarship was a fitting tribute to a leader who always strived to put the needs of students first.

"Dr. Tadlock served as an inspiration to so many during his time as regional chancellor," McAfee said. "We're so pleased that his legacy will be remembered by generations of students who will get the opportunity to fulfill their dreams thanks to this scholarship."

Those interested in contributing to the Dr. Martin Tadlock Endowed Scholarship fund can do so here.

The scholarship was one in a series of tributes to Tadlock as he prepares to rejoin the faculty in the USF College of Education on July 1, 2022.

During a campus-wide breakfast for faculty, staff, students and community members, a new kayak was unveiled that students will be able to check out from the USF St. Petersburg campus boathouse. It was dubbed the “Tadpole,” which is a longtime nickname of Tadlock’s.

In addition, at the May 5 St. Petersburg City Council meeting, Mayor Ken Welch read a proclamation highlighting Tadlock’s many achievements during his tenure as regional chancellor. These included the creation of new initiatives, such as the Innovation Scholars program, where first- and second-year students received job shadowing opportunities, as well as overseeing the construction of new facilities such as Osprey Suites, a five-story residence hall that opened in 2020.

Welch also declared May 5, 2022 as “Regional Chancellor Dr. Martin Tadlock Day,” and urged all citizens to join him in recognizing Tadlock’s many contributions to the campus and to the city.

Several City Council members congratulated Tadlock on his successes and thanked him for his service to the university and to the city.

“You have done such a wonderful job as regional chancellor at USF St. Petersburg,” said Councilmember Ed Montanari. “It’s a jewel right here in downtown St. Petersburg. You took a wonderful campus and you’re leaving it in a much better place.”