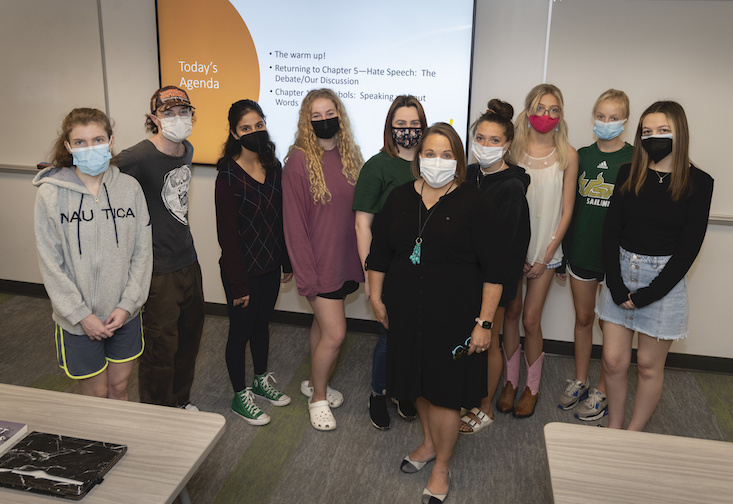 A partnership with Stetson University College of Law has brought the first honors law class to USF’s St. Petersburg campus and its students.

The honors college class titled “Text, Tweet, Take to the Street: Dissent and the First Amendment” focuses on the relationship between citizen dissent and free speech. Through analyzing United States Supreme Court opinions and discussing topics like protesting war, joining civil rights movements and tweeting provocative statements, undergraduate students are getting a better understanding of the speech and expressions that are protected under the First Amendment and which are not.

“In all areas of life, we are dealing with what dissent looks like. We see it on television, in our neighborhoods, on Twitter and Facebook,” said Kirsten Davis, a professor of law at Stetson University and the inaugural Judy Genshaft Honors College Visiting Professor of Law. “For any citizen, understanding how the First Amendment fits with that discourse is really important.”

The seminar covers much of the same ground as a traditional law school class, examining constitutional law, Supreme Court precedents and additional case studies in the realm of free speech and debate. But to adapt her law school course to the liberal arts and sciences learning environment, Davis utilizes a range of strategies, like crossword, pangram puzzles and art sessions to help recall concepts from previous lessons and engage students on often complicated issues and terminology.

“I’ve taken what I know about teaching law school and adapted it for what I hope is a fun and interesting course for outstanding undergraduate students, no matter their major,” she said.  “I think our favorite in-class activity has been making art as a way to review key concepts of the course. Later on, we’ll be working with poetry as a way to explore free speech concepts.”

The class is valuable to students on the St. Petersburg campus because of the relevancy of the topic, while also introducing them to career paths in law.

“The class will help students decide whether or not they want to attend law school. Even if it’s not for them, now they’ll know,” said Thomas Smith, associate dean of the Judy Genshaft Honors College and a professor of political science. “Students will come away from the class with an understanding of the boundaries of the First Amendment, but also an appreciation of the role of free speech in a democratic society.” 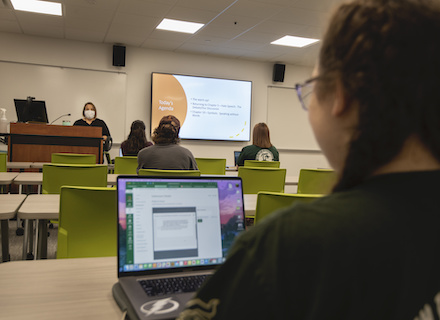 The honors seminar on the First Amendment covers much of the same ground as a traditional law school class.

The class consists of students from a wide range of majors, including Psychology, Political Science and Biology. Psychology sophomore Isabella Simon-Pleines came into the class just wanting to learn more about free speech and the law in general.

“I didn’t realize how much was covered under the First Amendment, and it’s been really interesting to have those debates about what should and should not be covered,” she said.

Senior Elaine Begleiter had an interest in law and criminology from her time in high school, and said she has a better understanding now of how such material could be used in her future career.

“I’m still deciding between going into experimental psychology or social work therapy-based psychology,” she said. “If it’s the latter, the law would play a big part in working on issues regarding child advocacy and the court system and the rights between parents and children.”

Hosting yearly classes on campus - another course on environmental regulation is being taught to Environmental Science majors this semester by Stetson’s Foreman Biodiversity Fellow Katherine Platt and third-year law student Lauren Beames - is just one aspect of an articulation agreement between USF and Stetson.

The agreement also includes an accelerated pathway and direct admission programs for USF students. Any USF student who achieves a certain GPA and LSAT score are guaranteed admission and a generous scholarship package at Stetson as part of a 4+3 program.

A 3+3 Bachelor’s/J.D. accelerated pathway program allows eligible honor college students to begin their first-year law courses at Stetson while completing their final year at USF. Meaning, students can graduate from USF at the end of their fourth year and proceed into the second year of law school.

Moving forward, the partnership will seek to bring other Stetson professors to campus to teach the many facets of law to USF students.

“I can foresee future courses offered to our students that cover cutting-edge issues such as law and privacy, law and technology and other topics that are having a direct impact on their lives,” Smith