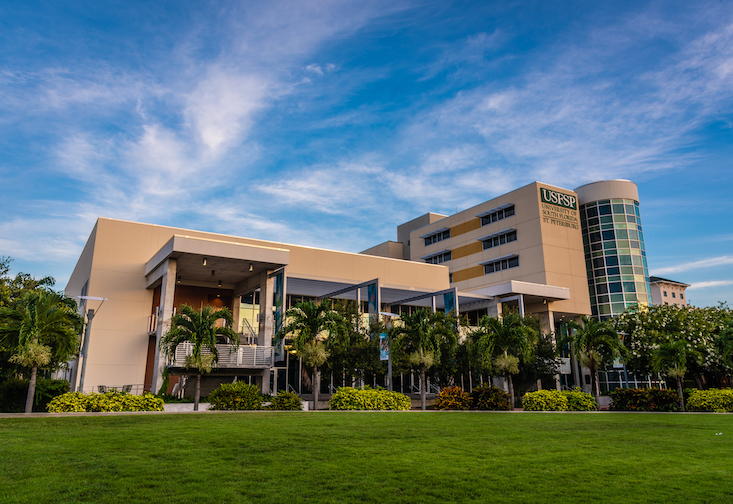 Four candidates seeking to become the next regional chancellor at the University of South Florida St. Petersburg campus are moving forward in the search process. Today, in a publicly held meeting, the Regional Chancellor Search Committee advanced four qualified candidates to the next round:

Each candidate will come to campus next week to participate in town hall visits, meetings with university and community leadership and interviews with USF President Rhea Law.

The campus visits will give the USF community an opportunity to interact with each candidate, share ideas and ask questions. The town halls will be held in the University Student Center (USC) ballroom at the following dates and times.

As soon as details are finalized, the Regional Chancellor search site will be updated with information on when each candidate will be on campus.

Each town hall visit will also be livestreamed via Microsoft Teams and can be accessed through the Regional Chancellor search site.

Members of the USF community are encouraged to submit questions and provide feedback via an online portal on the Regional Chancellor search site. This feedback will be reviewed by President Law.

After interviewing the candidates and a review process of their experience along with community feedback, President Law will select the next regional chancellor to lead the St. Petersburg campus.

Below are bios for each candidate:

Melissa Gruys has extensive experience in academic roles and administration in higher education and building relationships with community partners and stakeholders. She is currently the dean of the Richard T. Doermer School of Business at Purdue University Fort Wayne, where she oversees more than 100 employees, including 40 full-time faculty, and manages the Student Success Center for academic advising, professional development and community outreach. During her tenure, she oversaw a dramatic rise in fundraising, increased retention among first-year full-time students and enhanced international collaborations and partnerships. She was also chair of the university-wide diversity, equity and inclusion committee.

Christian Hardigree is the founding dean of the School of Hospitality at Metropolitan State University (MSU) in Denver, which is the third largest and only open-access institution of higher education in Colorado. Hardigree led the transition to a free-standing school and developed/implemented departmental structures, school strategic plan and initiatives, and other deliverables. She has secured more than $3,775,000 in external funds to support the school and led faculty through curriculum redesign of six degrees and majors, eight minors and nine certificates.

A fifth-generation native of St. Petersburg, Fla., Kanika Tomalin has a diverse portfolio of leadership positions and served as deputy mayor and city administrator for the city of St. Petersburg from 2014-2021. Most recently, she has held the position of vice president for strategy and chief operating officer at Eckerd College in St. Petersburg.

Tomalin began her career as a journalist at the St. Petersburg Times (now Tampa Bay Times) before joining Bayfront Medical Center in 2000 as a fundraiser. She later joined the public affairs office at Bayfront and became manager in 2004. After serving as director of corporate communications for four years, she was promoted to executive director, then vice president, of strategic planning and public affairs in 2010 and 2011.  Tomalin went on to become the regional vice president of external affairs for the Bayfront Health Network and director of strategy for Health Management Associates’ 23-hospital Florida Group. Appointed by Mayor Rick Kriseman to be deputy mayor of the city of St. Petersburg, in 2018 her scope expanded to include city administrator, where she oversaw all of the city’s administrative and operations functions. She was named to her current position in January 2022 and oversees all of Eckerd’s operations and strategic functions, including planning, infrastructure, capital asset management, sustainability and resilience, and technology systems, while advancing the college’s strategic initiatives.

Tomalin earned a bachelor of science degree in broadcast journalism from Florida Agricultural and Mechanical University (FAMU), a master’s in business administration from the University of Miami and a doctorate in law and policy from Northeastern University.

Bjong Yeigh has been at the helm of two different universities for more than 13 years. From 2013-2021, he was the chancellor of the University of Washington (UW) Bothell. During his leadership tenure, he oversaw the expansion of academic programs from 30 to 55, the doubling of student enrollment and an increase in philanthropic support that concluded with a $41 million campaign in 2020. Prior to his tenure at UW, he was the president of the State University of New York (SUNY) Institute of Technology at Utica/Rome from 2008-2013 where he secured $15.5 million capital grants for cybersecurity and nanotechnology programs, led efforts to gain two rounds of funding for regional economic development projects totaling nearly $120 million and guided the building of more than $100 million in capital projects on campus.

Yeigh has held a number of academic and administrative roles during his higher education career. With an academic background in Engineering, Yeigh has held professorship roles at Oklahoma State University and Yale University. He has also been the Vice President for Academic Affairs at Norwich University and the Dean of the College of Engineering at Saint Louis University. He is an elected fellow of the American Society of Mechanical Engineers and serves on several national and state boards for engineering, economic development, public policy and education.

Yeigh earned his undergraduate degree in engineering science from Dartmouth College, a master of science in mechanical engineering from Stanford University and a doctorate in civil engineering and operations research from Princeton University. Yeigh served as a tactical air intelligence officer in the U.S. Navy and held the rank of lieutenant upon his honorable discharge from the Navy Reserve in 1995.