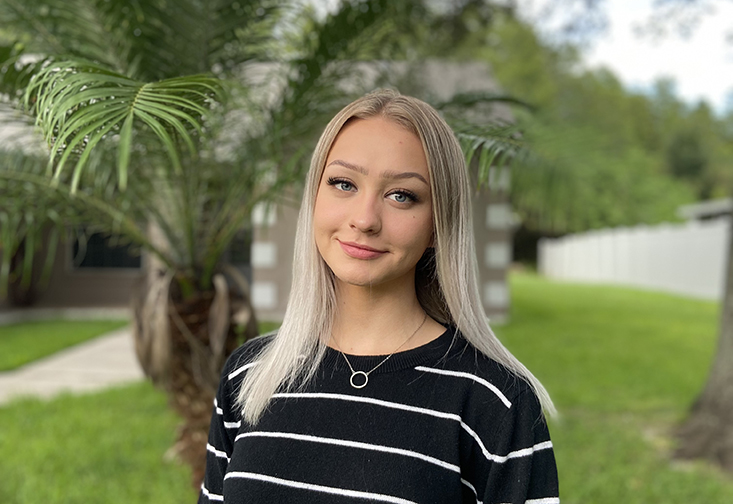 Abigail Cooper, 19, is graduating with a bachelor’s degree in forensic studies and justice.

Abigail Cooper has always been an overachiever. As a high school student, she joined a dual enrollment program at a college near her home in Orlando. Two years later, at the age of sixteen, she was graduating with both her high school diploma and associate's degree.

"I was proud," said Cooper. "I was dead-set on having two more years and spending that time taking the most college classes I could."

That same determination and focus has now resulted in her becoming the youngest graduate at the University of South Florida’s 2021 summer commencement. At just 19 years old, Cooper is graduating with a bachelor’s degree in forensic studies and justice.

Cooper came to USF’s St. Petersburg campus in the fall of 2019. She was 17 years old and genuinely excited for her new home. She says her first semester was filled with new friends and compassionate faculty and staff. The ambitious teen was on the fast track to graduation.

But the intense pressure she put on herself soon led to health problems. Over the winter break, she struggled with a severe eating disorder.

"I started to isolate myself. I was so physically drained I could not sleep, focus in class or even go out with my friends anymore,” Cooper said. “I was mentally overpowered by the effects of anorexia. There's a reason why it's considered one of the most intense mental illnesses and gets treated as an addiction. I didn't feel like myself anymore."

Anorexia nervosa is an emotional disorder characterized by an obsessive desire to lose weight by refusing to eat. Some people exercise compulsively, purge via vomiting or binge eat. According to the National Institutes of Health, people with anorexia nervosa behave similarly to those with substance abuse problems by narrowing their behavior so that weight loss, restricting food intake and excessive exercise interfere with other activities.

In Cooper's case, she couldn't stop thinking about food. She would run in the middle of the night to burn calories and she couldn't sleep because she was hungry. She recalls the day she woke up so weak that she could barely walk to class. As she sat there listening to the lecture, she shivered uncontrollably because her body couldn't regulate its temperature, a side effect of anorexia.

It was the start of the spring 2020 semester and the first signs of the COVID-19 pandemic were just beginning. Cooper's eating disorder was getting worse, and she knew she needed help. After shedding many tears and talking to counselors on campus, she decided to go home where her mother could help her find a treatment program.

"It was the hardest thing I've ever done because that meant breaking the narrative of the girl and student who had it all together. A pressure I put on myself more than anyone," Cooper said.

The next six months were spent at home and in therapy, where Cooper learned to overcome her disorder and find a new sense of self. During this time, she continued her education, excelling in her classes via remote learning. She returned to the USF St. Petersburg campus full time in the fall of 2020 and is now earning her bachelor’s degree in just two years.

"I learned a lot about balancing and prioritizing. I don't have to be perfect. I'd rather graduate this way, six months later than before when I felt absolutely awful about myself," she said. "I love school. It gives me a lot of structure and I just really enjoy it—especially the last few years. I really started to see myself get better in the fall of last year when I was back full-time."

Cooper is excited to return to the Tampa Bay area with her family to participate in the summer 2021 commencement ceremonies.

And after graduation, she plans to take some time off for herself and her health before attending law school.