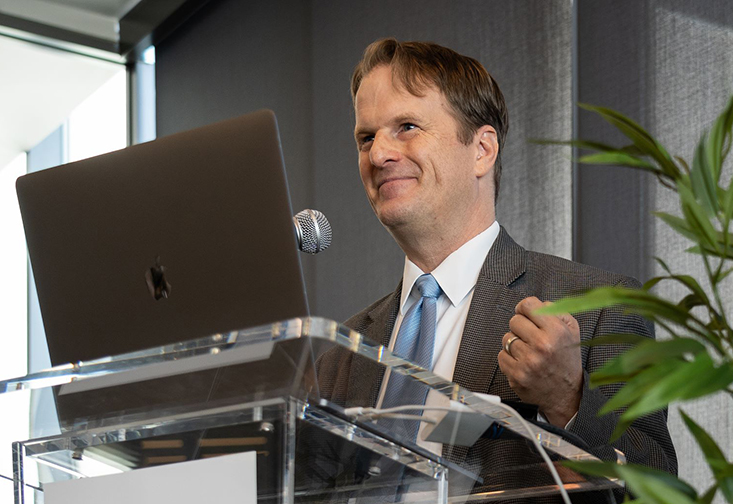 J. Michael Francis, the Hough Family Endowed Chair of Florida Studies at USF’s St. Petersburg campus, will be presented with the Officer’s Cross of the Order of Isabella the Catholic at a ceremony at the official residence of Spain’s Ambassador to the United States in Washington, D.C. on October 28.

King Felipe VI of Spain named Francis to the order, which rewards “extraordinary civil behaviors” that promote friendship and cooperation between Spain and the rest of the international community, according to the ambassador’s office.

Francis said he was surprised and humbled by the recognition, and credited the support of his many collaborators and partners over the years.

“This is certainly the most prestigious honor I’ve received in my career,” Francis said. “It is an individual honor but one that would not have happened had I not had a lot of other shoulders to stand on.”

At the ceremony, Francis will be presented with a red-enameled cross with a golden frame. The center of the medallion reads “A La Lealtad Acrisolada” (To Proven Loyalty) and “Por Isabel la Catolica” (By Isabella the Catholic).

"Professor Francis has done remarkable work to shine a spotlight on Florida's early Spanish history.  We are all very pleased to see him honored in this meaningful, and highly significant, way," said Martin Tadlock, regional chancellor of USF’s St. Petersburg campus. "This recognition is important to everyone on this campus as well as in the state of Florida. It demonstrates our commitment to supporting our faculty and their world-class research, and it also reflects the value of that research to the citizens of this state."

The Order of Isabella the Catholic was created in 1815 by King Ferdinand VII with the intent of "rewarding the firm allegiance to Spain and the merits of Spanish citizens and foreigners in good standing with the Nation and especially in those exceptional services provided in pursuit of territories in America and overseas,” according to the Spanish ambassador’s office. It is open both to Spanish citizens and to foreigners.

Francis is the executive director of La Florida: The Interactive Digital Archive of the Americas, a groundbreaking project that weaves together short videos, interactive maps and digital reconstructions to bring to life the diverse melting pot of people who made up early Spanish Florida. Francis and his team spent years combing through thousands of original documents, maps and images to chronicle the diverse lives and events that formed Florida’s earliest history.

In addition to La Florida, Francis has collaborated with the Spanish government on several other notable initiatives. In 2013, he worked with the Spanish embassy and Spanish Consulate to curate a museum exhibit titled “Imagining La Florida: Ponce de Leon and the Quest for the Fountain of Youth,” which used interactive technology to explain the perils of early Spanish exploration and the rich colonial history of Florida.

In 2015, Francis was one of only two historians appointed by the U.S. Secretary of the Interior to serve on the Federal St. Augustine 450th Commemoration Commission, which recognized the history of the nation’s first city. Francis wrote a book, “St. Augustine: America’s First City, A Story of Unbroken History & Enduring Spirit” to mark the event.

Recently, Francis and his team received a $250,000 major initiatives grant from the National Archives, which will go toward a new La Florida initiative titled “Europeans, Indians, and Africans: Lost Voices from America’s Oldest Parish Archive, 1594-1821.” The project will make more than 9,000 handwritten documents from St. Augustine’s diocesan archives accessible to a global audience, providing rare insight into the daily lives of the multi-ethnic population of Europeans, Africans and Native American who resided in early St. Augustine.

Francis, who has taught at USF’s St. Petersburg campus since 2012, said his recognition was made possible by the support of his university colleagues, as well as Bill and Hazel Hough, the donors who created the endowed chair he now holds.

“Without the Hough Family Foundation, I don’t think this would have happened,” Francis said. “I would not have had the kinds of opportunities in terms of working with students and also getting to work so consistently in Spain. The entire Hough family and their commitment to the promotion of Florida history is at the core of all of this.”