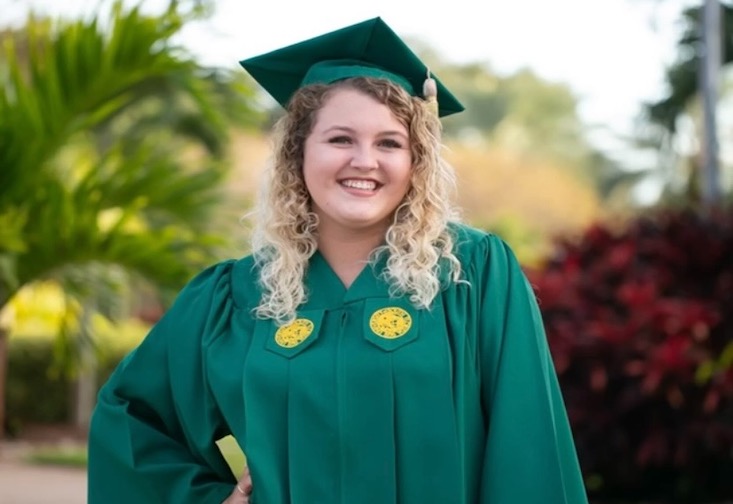 For three years, Sara Henk was a welcoming presence for newcomers to USF’s St. Petersburg campus. As an orientation leader, she helped acclimate first-year and transfer students into the academic and community life of campus.

Orientation leaders are part campus representatives, part role models, part sources of knowledge and part supportive peer for students and their families during the transition to higher education. Sara would help organize orientations, answer many, many questions and support students in their new surroundings.

She really enjoyed her role. And even though much of orientation activities went remote during the pandemic, which proved challenging, Sara still found ways to engage with students in virtual settings, hosting live sessions and holding icebreaker events. This year, she became the head orientation leader.

“I wanted to get involved on campus and this seemed like a fun way to do that,” Sara said. “The orientation team was just a great family environment and being a part of it made me grow as a person. I was super quiet and shy when I started and now super outgoing and talkative.”

After four years of classes, friendships, activities and being a valued student leader, she will be one of 418 students on the St. Petersburg campus graduating this fall.

It is a bittersweet moment for her.

“This campus became another home that I didn’t know I would have or end up having,” Sara said. “And now after being shut down, the campus is starting to come back to life to what it was like before the pandemic, so it is bittersweet.”

Sara grew up in the suburbs of Chicago. She moved with her family to Orlando prior to starting her freshman year of high school, and when it was time for college, she was drawn to the Tampa Bay region and eventually to the St. Petersburg campus with it’s “nice views and welcoming environment.”

In those college years before the pandemic, she lived on campus, met new friends and ventured to events throughout the city. After living in the suburbs, she was drawn to the energy of the city environment.

Initially interested in accounting, she ultimately opted to pursue a degree in Management Information Systems because she was attracted to data analytics and the ever-changing world of business technology. Sara also decided to earn a Leadership minor, thanks to her experience with the orientation team.

When the pandemic hit in March of 2020, she returned home. Besides all the other monumental changes the pandemic brought about, it also added the delicate task of once again sharing a house with her parents and sibling.

“All four of us in the same house, all trying to do everything we were involved with prior to the pandemic,” Sara explained.

The hardest aspects of the transition were being away from friends and the classroom environment. Adjusting to online learning took some time as she figured out how to schedule time for herself to complete coursework while navigating all the distractions going on in the world.

Now that graduation has arrived, Sara is reflecting on the significance of this moment and all she went through to get to today.

“Neither of my parents graduated college, so it’s a big thing for them. And for me, I’ve definitely grown as a person these years. I have become more confident in myself and that has to due with all the friends and connections I have made here.”

Sara, who has been interning with Enterprise Rent-A-Car, will take on a full-time role with the company after graduating. Then her plan is to return to the campus that has been a second home to her, to earn her MBA.