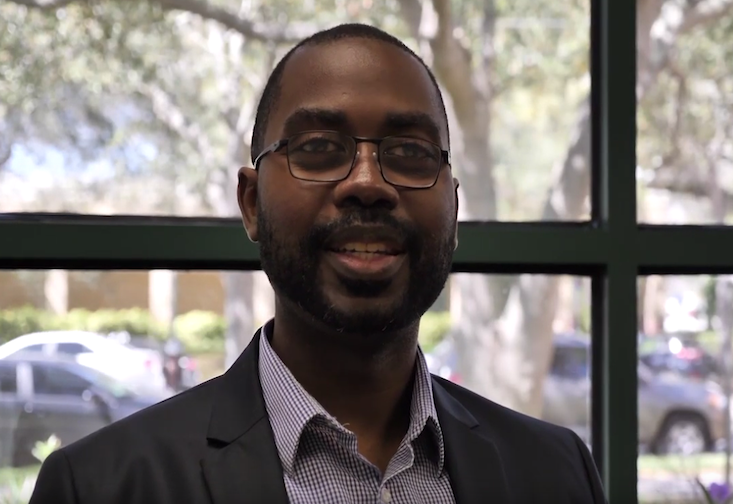 Isaacs is currently the director of Student Life & Engagement, where he oversees student affairs programming and initiatives while mentoring students involved in Student Government and other various clubs.

Dwayne Isaacs, director of Student Life & Engagement at the University of South Florida’s St. Petersburg campus, has received the 2021 Legacy Leader Award from the Association of College Unions International (ACUI).

The award, which is voted on by fellow ACUI members, recognizes individuals who have been instrumental leaders in building community by promoting the role of the college union and student activities on campus.

“I am so appreciative of this award, especially because my fellow colleagues who I hold in such esteem saw fit to recognize me,” said Isaacs. “What also makes this special is that there was a fundraising component behind my nomination, which goes to student scholarships, and that goal was met.”

Isaacs, who is a USF alum, has been with the university since 2000. He was part of the student affairs team that helped to open the Marshall Student Center at USF Tampa in 2008. He moved over to the St. Petersburg campus in 2012, where he oversaw the newly opened University Student Center.

Isaacs is currently the director of Student Life & Engagement. In this role, he oversees student affairs programming and initiatives such as Multicultural Affairs and Harborside Activities Board while mentoring students involved in Student Government, the Crow’s Nest student newspaper and more.

Throughout his time, Isaacs has been an advocate for other USF staff in the student affairs profession.

“Dwayne has been a tremendous supporter throughout my career and had a big influence on my choice to enter the field of student affairs in the first place,” said Anthony Carinci, director of student success resource management on USF’s St. Petersburg campus.

Isaacs has also played an active role in advancing the college union profession and the mission of ACUI. For more than a decade, he has served in various roles for the organization, including educational programs coordinator, web and social media coordinator, the 2017 regional conference coordinator and most recently regional director. In these roles, he has helped plan conferences and programs while connecting members from different institutions to advance the college union field. He also served as an I-LEAD facilitator, ACUI's premier student leadership and community building program.

“Dwayne is a natural leader because he cares for others and has a passion for mentoring young professionals and guiding them in building a stronger campus community,” said Alison Ward, assistant director of the student union at University of Tennessee Knoxville and ACUI Region III director. “He serves as a role model to other young men of color and the connections he has made across the association has made him a colleague to all.”

The award was announced at the annual ACUI conference that was held virtually on March 3-5. ACUI is the professional home to thousands in the college union and student activities field, with the mission of developing community through education, advocacy and the delivery of services.

“ACUI has been extremely instrumental in my career development and making me the person that I am,” said Isaacs. “This association has not only introduced me to fellow colleagues who I can ask for advice and lean on, it has given me a community.”