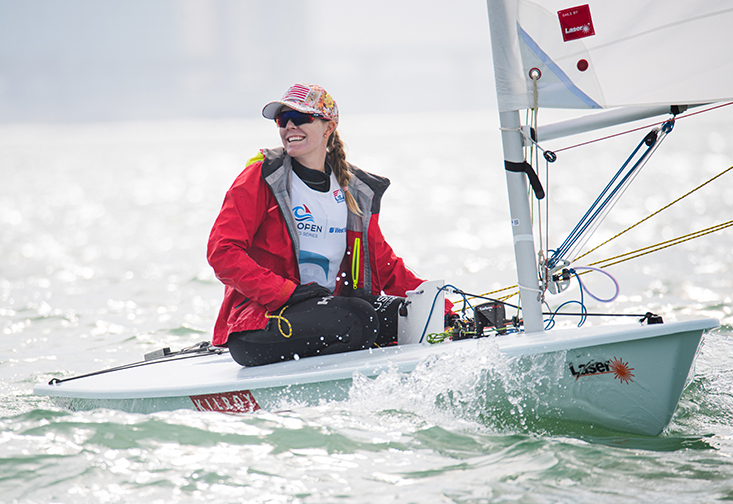 If you ask Paige Railey if she wants to win a gold medal at the Tokyo Olympics, the answer is yes, of course! But it's not her primary goal.

"I just want to perform well. I want to go out there and execute the things I've been training for,” Railey said. “If I do that, everything will fall into place."

At 34, the Clearwater native thinks she is both physically and mentally ready for her third Olympics as part of the U.S. national sailing team. She will compete in the Laser Radial, an incredibly demanding endurance sport. The one-person Laser dinghy is a single-handed sailboat created for lighter-weight sailors.

"We have long races over six days, and the whole time that you're sailing, you're trying to look at the tactics of how you're going to position yourself amongst the wind and other people that are sailing,” Railey described. “At moments during the race, you have to put out a lot of power, so it's a physical sport."

Railey has been a sailor since she was eight, when her dentist suggested to her parents that they put her in a sailing class. After that, the sport became a family affair.

Her older brother Zach was a 2008 Olympic silver medalist in the Finn class, a single-handed sailboat and an Olympic class for men's sailing. The siblings fed off each other’s dedication and passion for the sport.

"I love being on the water. I think what's cool about sailing is that it's like doing a triathlon, playing chess and powerlifting at the same time," Railey said.

Preparing for the Olympics while pursuing a bachelor's degree

As a member of the U.S. Sailing Team since 2005, Paige has won her share of races and awards. In 2006, she won the Laser Radial World Championship, which propelled her to international recognition, earning her both Rolex World Sailor of the Year and U.S. Sailing's Rolex Yachtswoman of the Year. After narrowly missing selection to the 2008 Beijing Olympic Team, she spent the following years training and sharpening her skills, determined to get to the next Olympics.

During that time, she was also a full-time student at the USF St. Petersburg campus.

"I found the St. Petersburg campus pretty. It was right on the water; it wasn't just a land-based school,” Riley said. "The thing I loved about it is that it had a smaller number of students, so I felt like I was more one-on-one with my professors, rather than going to a class that had 300 kids in it.

"Railey would often spend up to 12 hours a day working out, studying and hoping to graduate in less than four years. Although she didn't have much time for a social life, she did get to sail with the USF women's sailing team a few times. She credits USF Sailing Head Coach Allison Jolly, who won a gold medal in the 1988 Olympic Games in Korea, for helping her navigate college life while also pursuing her athletic career.

"Allison was the reason I was able to do an Olympic campaign and go to school at the same time," Railey said.

The hard work paid off, and in 2010 Railey graduated from the USF St. Petersburg campus with a bachelor's degree in Management.

The road to Tokyo

However, shortly after the Rio Olympics, she faced a setback. She was diagnosed with an autoimmune disease that forced her to take time off from sailing. It was one of the most challenging years of her life, but she weathered the storm.

"I think it all depends on how hard a person is willing to work. So, if you are willing to put in the effort, you can achieve anything you want to. Just remember what your goals are and you will succeed."

Railey made a comeback in 2018 when she placed 2nd at the Laser Senior European Championship. She performed well at the 2019 and 2020 world championships and shortly before the pandemic, qualified for the Tokyo 2020 Games.

Though the postponement of the Summer Olympics to 2021 due to the coronavirus pandemic was another setback, Railey took advantage of the extra time she was given. She worked out any way she could and used the opportunity at home to focus on her goals. Now, it's not all about winning a gold medal; but performing to the best of her ability.

"The Olympic medal is the one thing I have yet to acquire, so to me, that would be amazing. But, I've had one heck of a career and it's something I can be proud of for the rest of my life."

The 2020 Summer Olympics will be held in and around Tokyo, Japan July 23 -August 8 2021.The sailing events will be held south of Tokyo in the city of Enoshima.