Board of Trustees approves funding for a new pool on campus 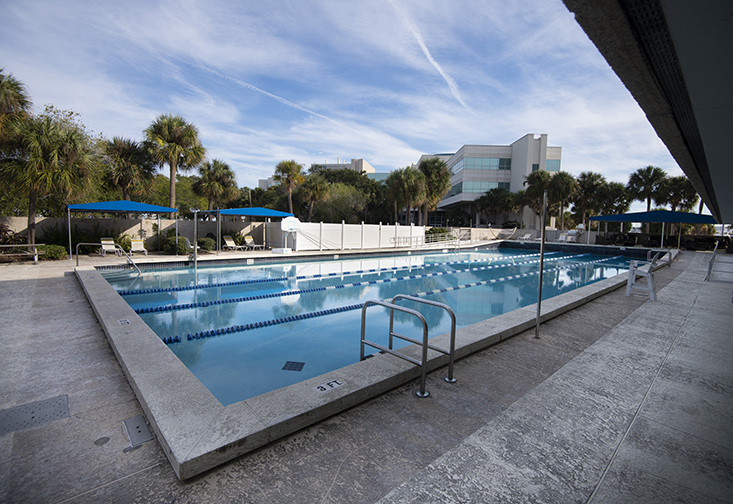 The current pool outside of H. William Heller Hall was built in the 1930's

After eight decades of use, the pool outside of H. William Heller Hall will be replaced by a new pool closer to the center of campus.

On December 7, the Board of Trustees approved the use of $2.1 million from Campus Improvement Trust Funds for a new 4,600-square-foot pool with a separate, enclosed pumphouse as well as new indoor classroom and office space.

The new facility will be built behind the Pelican Apartment’s residence hall between 2nd Street S. and Dali Boulevard S. A retention pond is currently in that space. 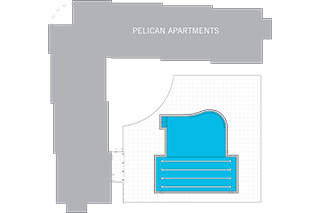 Layout of new pool to be located behind Pelican Apartments

The outdoor facility will include a pool deck for programming or lounging, bench seating in the pool, lap lanes, an ADA lift and an outdoor shower. The inside will feature a reception area, men’s and women’s locker room and showers, a wet classroom, additional student space, offices for Campus Recreation staff and a separate building on the other side of the pool for equipment and storage.

Built-in the 1930s, the current pool is in dire need of repair. It was initially designed as a maritime training station for the U.S. Coast Guard. Years later, when the USF St. Petersburg campus took over the location, the pool was used by students and faculty for events and social gatherings as well as anyone else who had a Campus Recreation membership. 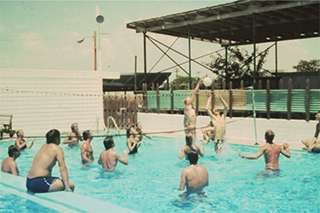 Water volleyball at the USF St. Petersburg campus pool in 1979

Over time, the maintenance became time-consuming and expensive.

“All of our equipment from pumps to heaters is exposed to the outdoor elements. It’s hit by saltwater because it’s right by the bay. And the sunlight, wind and all the elements are pounding on it,” said Al Gentilini, the director of Campus Recreation.

The current pool has several leaks, and the heater is broken and needs to be replaced. The estimated cost of upgrading the old pool and fixing the damage is $1.5 million.

“We aren’t being good stewards if we keep dumping money into this old pool when we could be saving money,” Gentilini added.

The new design will allow better use of the deck space and bring in revenue to offset some of the costs. Campus Recreation can hold scuba or swimming lessons there, and outside entities can utilize the pool for youth camps during the summer.

“We’ll also build a new pumphouse where it will hold our equipment securely, inside, with another storage space for the chemicals,” Gentilini said.

In a 2019 survey, a third of the students indicated that they didn’t know there was a pool on campus or where it was located. The current pool sits behind the Edge, which is attached to Heller Hall in the Southeast corner of the campus.

“If it’s out of sight, it’s out of mind. I forget about the pool because I’m so busy, and I don’t see it,” said Veronica Jimenez, a senior majoring in Global Studies and the St. Petersburg campus student governor.

The students also indicated in the survey that they don’t feel comfortable walking across campus in swimwear.

“I think it’s a matter of feeling comfortable. I love where the pool is, by the Edge, but it’s so far out of the way, I honestly don’t feel comfortable walking all the way through campus in a bathing suit and a cover-up. I’m sure other students feel the same,” Jimenez said.

The new centralized pool will be closer to the fitness center, recreation field and volleyball and basketball courts. The location is expected to attract new students to the St. Petersburg campus since they often choose a university based on location and its amenities like a pool and recreation facilities.

The timeline for the new pool includes updated architectural drawings to be completed in January 2022, with bids for the construction going out in the spring. Gentilini said he expects to break ground by the end of the summer and open the new pool by the Spring of 2023.