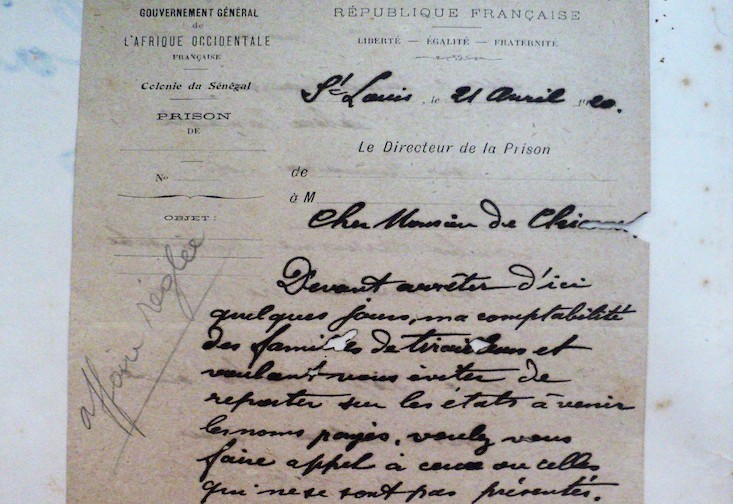 Kopytoff spent the past several years doing archival research on laws, court cases, elections and protests to explore how the concept of citizenship evolved in Senegal and France in the early 20th century. This archival document is from the National Archives of Senegal in Dakar. Photo by Larissa Kopytoff.

History Instructor Larissa Kopytoff has received a National Endowment for the Humanities (NEH) grant to continue research into the evolving ideas of citizenship and identity in colonial and post-colonial Africa. Kopytoff’s research project was one of 225 humanities projects across the country selected by NEH that received a total of $24 million in grants last month.

Kopytoff, a historian of Africa whose research explores citizenship and nationality issues, will use the summer stipend grant to continue her work examining how citizenship in Senegal was continuously redefined and reimagined by African men and women around the beginning of the 20th century.

“Most of the research on this subject was completed in Senegal and France over the last few years,” Kopytoff said. “The NEH stipend will provide me with the additional resources and time to write and revise the manuscript to prepare it for book publication in the near future.”

Though the research project focuses on French colonialism in Africa during the period from 1870-1930, Kopytoff explained how many of the notions of personal identity and citizenship resonate in America today.

“Even though this is a project on African history, the central themes are really relevant for how we think about the world today when it comes to citizenship and how the legal status of individuals intersect with other important identities such as religion and race,” Kopytoff said. “Working on this project has helped me think in new ways about immigration in the U.S. and the history of colonialism in other parts of the world, and I’m able to explore these ideas with students through my teaching.”

Kopytoff’s fascination with this period of history grew out of her time living in France for a year before starting her PhD program. She became interested in France’s relationship with its former colonies, which raised questions about citizenship, how it was defined by the state and what it meant to people both in France and its colonies.

“NEH is proud to support these 225 new projects, which embody excellence, intellectual rigor and a dedication to the pursuit of knowledge, even as our nation and the humanities community continue to face the challenges of the pandemic,” NEH Acting Chairman Adam Wolfson said. “We look forward to the contributions these projects will make to our understanding of ourselves and our society through exemplary humanities research, publications, documentary films, exhibitions and undergraduate programs.”