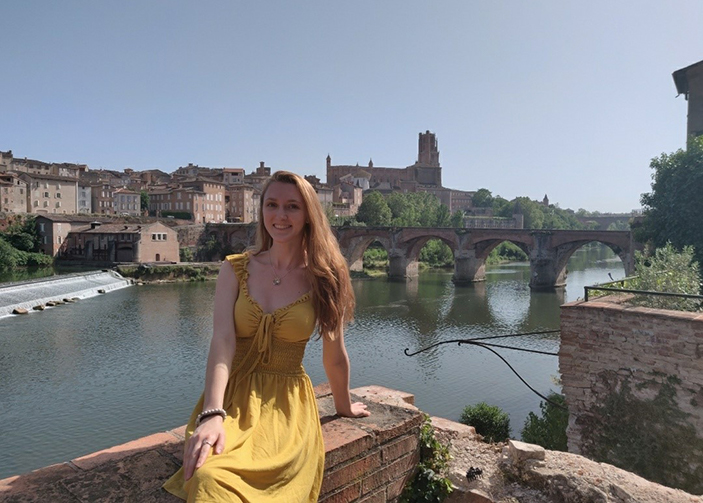 At age 8, Kayla Hopper heard Lady Gaga singing in a foreign language in her song, Bad Romance, and was enchanted by the beautiful and mysterious words.

“I asked my mom what language that was,” said Hopper, 21, who recently graduated from USF’s St. Petersburg campus with a degree in World Languages. “She said, ‘I think it’s French.’ And that’s the seed that planted my love of France and French culture.”

Hopper’s dedication to learning another culture recently paid off after she was accepted into a prestigious program that sends American students to France for seven months to teach English to French students of all ages.

The program is called the Teaching Assistant Program in France or TAPIF. Sponsored by the French government, more than 1,500 American citizens are sent to teach in public schools across all regions of France and in French-administered overseas territories such as French Guiana, Guadeloupe, Martinique and Reunion.

Hopper will be teaching in Toulouse, a large city not far from the Spanish border. She said she’s looking forward to immersing herself in French culture.

“It was the opportunity to solidify my fluency in French that attracted me,” Hopper said. “I also eventually plan to move to Europe permanently and I thought this would be a good doorway.”

Hopper is not the only USF student who has participated in TAPIF. Previous students have worked in French Guiana and Bordeaux, among other locations.

Anne Latowsky, an Associate Professor of French and the Associate Chair of USF’s Department of World Languages, said the university has been sending students to the TAPIF program for more than a decade. She said it’s a good incentive to continue studying French for those with an interest in living abroad.

“The value is huge in that it’s a nice place to imagine landing after graduation,” Latowsky said. “It’s something to dream of that doesn’t involve graduate school applications or telling your parents you’ve found a career. It’s a big step and a natural next step for someone who has been studying French.”

Associate Professor Martine Wagner, who taught Hopper and encouraged her to apply to TAPIF, said the program is very different from a typical study abroad experience because students must find their own lodging, set up a bank account and navigate a foreign culture on their own.

“They become more independent,” Wagner said. “Going abroad is a big step for many of them. Some have never left Florida or even the region.”

This will be Hopper’s second extended stay in France. In 2019, she participated in a month-long program that placed her with a French family. After TAPIF, she plans to enter the Peace Corps and then apply to graduate school in Europe. Eventually, she’d like to settle in France.

“I just tend to fit in more over there,” Hopper said. “I feel connected to the culture. And I’ve always loved the French language. I think it is hands down the more beautiful language on earth.”

Latowsky said TAPIF opens multiple doors for participants, including professional and personal development. It also highlights the benefits of learning a foreign language and exploring the possibility of living in a different country.

“I like to think we’re instilling confidence in them,” Latowsky said. “We are not only wanting to educate them while they’re at USF but also very attuned to what they’ll be doing next and how we can mentor them and help make that possible.”