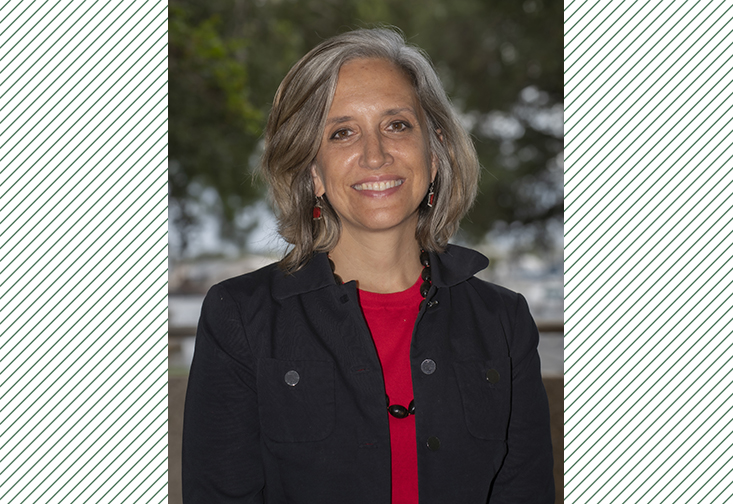 Caryn Nesmith, special assistant to the regional chancellor for strategic initiatives on the St. Petersburg campus for the past four years, has been appointed as the campus’ first director of community relations.

The University of South Florida’s St. Petersburg campus, in conjunction with several community partners, has created a new position in an effort to further strengthen the connection between the city, businesses and the university.

Caryn Nesmith, special assistant to the regional chancellor for strategic initiatives on the St. Petersburg campus for the past four years, has been appointed as the campus’ first director of community relations.

"I am excited to strengthen the role of USF's St. Petersburg campus as a community asset that sparks innovation, enhances community partnerships and amplifies the responsiveness of the university to meet community needs and opportunities," Nesmith said.

Among the key responsibilities of the director of community relations:

"This position serves as our campus concierge, connecting and encouraging collaboration between members of the community and our talented faculty, staff and students," said Martin Tadlock, regional chancellor of USF's St. Petersburg campus. "This also represents an innovative, formal collaboration between the university, the city and the Downtown Partnership to further interconnect the campus and community.  Caryn is perfect for such a collaboration, and brings a wonderful blend of experience, enthusiasm and professionalism to the role."

Nesmith will play a key role in linking faculty and staff expertise with community partners and initiatives and enhancing hands-on learning experiences for students. Strengthening these relationships with key stakeholders will provide greater opportunities for USF’s St. Petersburg campus students to use knowledge learned in classrooms and research labs to gain workforce skills while benefitting the community via class projects, internships and future employment.

The social and economic benefits from greater synergy between a research-intensive university and a dynamic, urban city was a primary reason why the city of St. Petersburg and the St. Petersburg Downtown Partnership partnered with the campus to create the director of community relations position.

"The city and USF's St. Petersburg campus have long enjoyed a close and mutually beneficial relationship," said Kanika Tomalin, deputy mayor of the city of St. Petersburg. "This new position will help us take that relationship to the next level, serving as a bridge to our community and giving citizens and business leaders easier access to our nationally-ranked research university."

“There is a direct connection between successful cities and centers of higher education,” said Jason Mathis, CEO of the St. Petersburg Downtown Partnership. “This new jointly-funded position will bridge academic, business and political worlds. Caryn’s work will build on the geographic proximity that makes USF St. Petersburg such a special campus and amenity for the urban center. Her shared responsibilities to the university, the city and the business community will help her build innovative synergies that improve our economy.”

Nesmith has been instrumental in facilitating and coordinating a number of key campus initiatives over the years that have made an impact on students and the community. Among them are Health Buddies at USF, which connects college students with senior citizens to reduce social isolation; the St. Petersburg Higher Education Consortium for Racial Justice that brings together four colleges and universities in Pinellas County to work towards dismantling racial hierarchies; and the Innovation Scholars Program, a job-shadowing program that pairs incoming first-year students with professionals in downtown St. Petersburg to get a head start on exploring interests and career paths.

"We have seen through the creative partnerships that Caryn has coordinated, how much St Pete businesses and community members are interested in engaging with students and faculty at USF,” said Alison Barlow, executive director of the St. Petersburg Innovation District.  “This role will maximize those opportunities not only immediately, but for years to come."

Nesmith is a native of Florida, but moved frequently living across the United States and abroad in Ecuador, Puerto Rico, Italy, Peru, and Iraq. Prior to arriving at USF’s St. Petersburg campus, Nesmith worked for CACI at U.S. Special Operations Command on Macdill Air Force Base, where she led a strategic engagement team in the International Liaison Division. For over a decade, she was a strategic communications consultant with a focus on international policy based in Washington, D.C. and prior to that worked as a journalist in San Juan, Puerto Rico. Nesmith has a master’s in International Relations from Johns Hopkins University’s School of Advanced International Studies, and a bachelor’s in Government from the University of Maryland.

“I hope this role will integrate the community more fully into the fabric of the USF St. Petersburg campus and vice versa, enhancing prosperity, entrepreneurship and expanding economic opportunities by enabling greater access and innovative ways to collaborate,” Nesmith said.