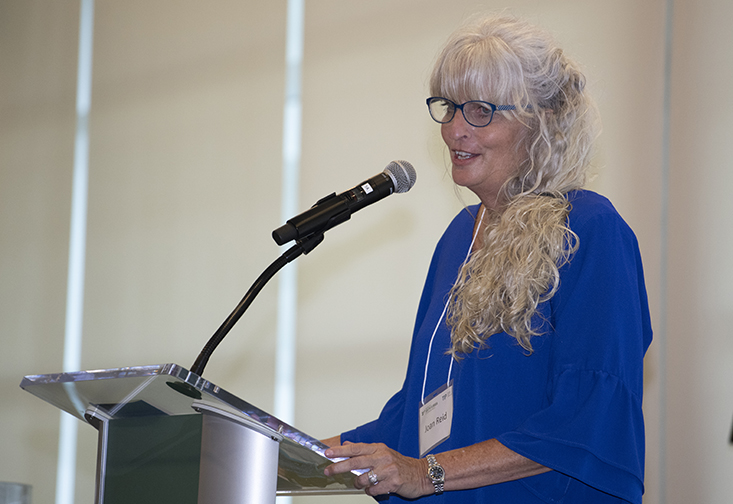 Researchers, legislators and law enforcement leaders came together at the University of South Florida St. Petersburg campus to celebrate the grand opening of a research lab devoted to studying human trafficking in the state. The event highlighted ongoing projects and recognized champions of anti-trafficking efforts in Florida.

The Trafficking in Persons (TIP) Risk to Resilience Research Lab is one of the first research centers dedicated to studying the myriad impacts of sexual exploitation of children in Florida and housed on the USF St. Petersburg campus.

“We realized there was a much larger group of youth who were vulnerable to this than previously understood,” said Joan Reid, a criminology professor whose research focuses on child sex trafficking in Florida and is director of the TIP lab. “I came up with the conclusion that any kid is vulnerable. Given the right situation, meeting the right trafficker, any person, any child can be manipulated into this.”

“As we began looking at this, we realized Florida does not have a unified data center for human trafficking,” Reid explained. “As we were interviewing stakeholders, it became apparent that many of them were lacking data; the data they needed to do their work.”

In 2019, Reid and her colleagues at USF received a $92,000 grant to establish the new research lab, whose goal is to make the region resilient to human trafficking. Since then, they have started projects that are bridging information gaps in human trafficking, which helps organizations locate and access services quickly and efficiently.

“I have been working and building collaborations specifically with researchers and community practitioners to address issues of violence,” said Shelly Wagers, a criminology professor and former Largo police officer who interviewed nearly 100 stakeholders for the TIP lab. “I have developed a group of strategic partners that represent all those different groups and who are working with us to develop a system so they can provide access to care.”

Florida currently ranks third in the United States based on the number of human trafficking hotline reports. Tampa Bay is considered a hotbed for child sex trafficking due to its vulnerable youth and influx of travelers. Reid says the state is taking action by creating anti-human trafficking legislation.

“One encouraging thing is that when research shows there is a problem, the legislative bodies have been extremely responsive passing laws that protect survivors of human trafficking or increasing penalties for types of trafficking of certain vulnerable populations,” Reid said. “Florida has led the way for other states to model their legislation.”

The grand opening ceremony was a way for Reid and other USF researchers to recognize those who have played key roles in initiating anti-trafficking legislation. The human trafficking disrupters of 2021 included Attorney General Ashley Moody, State Sen. Manny Diaz Jr., R-Hialeah, State Rep. Jackie Toledo, R-Tampa and Brent Woody, executive director of the Justice Restoration Center, a non-profit organization that addresses the legal needs of survivors.

“I am passionate about the fight against human trafficking,” said Toledo during the event. “The legislation that we filed this year was the tip of the iceberg on what we can do for victims and stop treating them like criminals. I will continue to fight and help in the future to eradicate human trafficking.”

Reid and her colleagues are confident the TIP lab will help answer important questions about survivors and how they get involved, to eventually reduce the amount of trafficking that takes place across the state.

“Research is limited by the data that you have, and it’s difficult to get data on such crimes,” Reid said. “My goal is to become a good source of data for those who are researching human trafficking.”