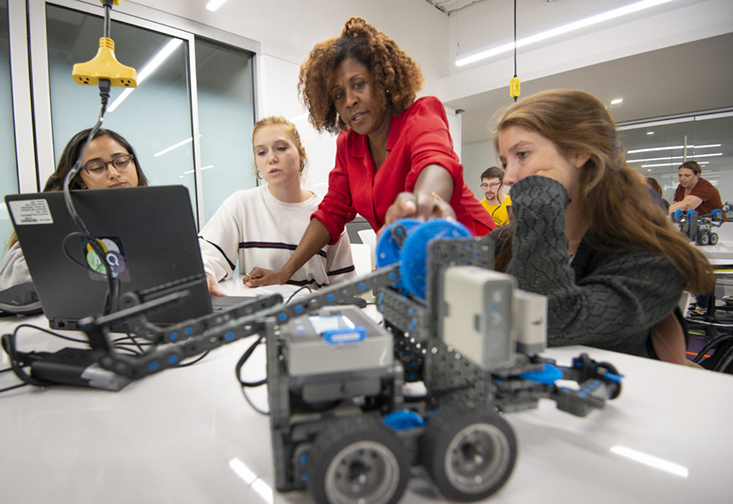 When Sandra Vernon-Jackson was growing up, she dreamed of becoming an astronaut.

While her life took a different path, Vernon-Jackson never abandoned her love of space. And on March 24, she’ll have the opportunity to moderate a discussion with a person who achieved that dream: Mae Jemison, the first woman of color in the world to travel to space.

“I so badly wanted to be an astronaut growing up and vividly remember when she became the first African American woman to go into space, so I am honored to just have a conversation with her,” said Vernon-Jackson, the director of USF St. Petersburg’s STEM INQ Lab.

The conversation will be part of Tampa Theater’s LIMELIGHT speaker series and will focus on the frontiers of science and human potential.

Jemison, who was a NASA astronaut for six years, broke one of the highest glass ceilings in 1992. She traveled aboard the shuttle Endeavour, STS-47 Spacelab J mission, where she performed experiments in material science, life sciences and human adaptation to weightlessness.

Jemison now leads 100 Year Starship, a nonprofit initiative that focuses on interstellar travel, with the daring goal of fostering human travel to another star within the next 100 years.

Her talk will touch on the need for exploration, areas of research in the realms of space and the ocean and how humans can contribute and benefit from such explorations. The talk will consist of a short presentation by Jemison, followed by a moderated discussion with Vernon-Jackson where she will ask questions and field questions from the audience.

Vernon-Jackson said that along with hearing about where we are and where we need to go with exploration, she will be interested to hearing how social interactions contribute or inhibit such explorations.

“Though we are exploring new worlds, a lot of its success or failures will be based on how we as people – from different cultures and ethnicity – engage with each other,” she said.

And on a personal note, Vernon-Jackson wants to know about Jemison’s own journey and how she became so successful in a field where women of color are largely underrepresented.

“What challenges did she face when she started in the space program decades ago and what strategies did she utilize in overcoming those challenges?” said Vernon-Jackson. “And are those strategies things we can apply for our own lives?”

Vernon-Jackson has been director of the STEM INQ lab since it opened in October 2018. Through the lab, Vernon-Jackson is pioneering new and exciting ways to teach science, technology, engineering and math.

She developed a STEM robotics summer camp for students in grades 5-8. The camp is designed to inspire young students while promoting critical thinking and problem-solving skills through diverse activities in computer science, engineering, robotics and applied math. In 2019, the camp was expanded to include a special session exclusively for girls, who are traditionally underrepresented in STEM fields. The lab has also hosted Pinellas County teachers for a STEM boot camp.

This is the second season of the Tampa Theatre LIMELIGHT series. The series brings distinguished personalities and thought leaders to share a broad spectrum of unique experiences and perspectives on diverse fields of topics.

More information about the LIMELIGHT series talk with Mae Jemison can be found on the Tampa Theatre website.