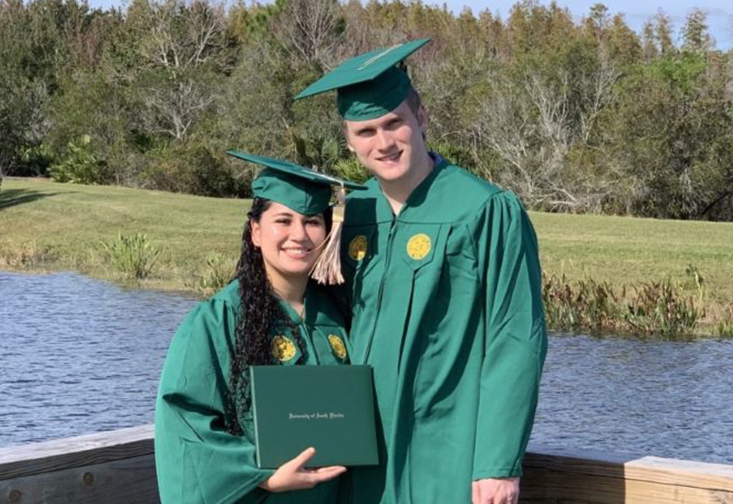 Michael and Jacqueline Ray will be the only married couple among the more than 450 students who will be graduating from the USF St. Petersburg campus this fall semester.

Like the course of love, the path to a college education isn’t always straight forward. At least that was the experience of Michael and Jacqueline Ray, who began their long graduation journey eight years ago at different community colleges in different states.

They met at Wharton High School in Wesley Chapel, Fla. and started dating. They kept in touch over the years as they pursued and earned AA degrees, Michael in Tampa and Jacqueline in Maryland.

Michael attempted to get his bachelor’s degree, but didn’t take his academics seriously and dropped out. Jacqueline, who is from El Salvador, relocated back to the Tampa Bay area. They were both concerned about piling up student loan debt, so they took their time and saved money.

While their paths toward an advanced degree meandered, their feelings for one another grew stronger. It would eventually lead to marriage. Soon after that momentous occasion, they decided to go back to school.

Now Michael and Jacqueline, 26 and 27 respectively, will be the only married couple among the more than 450 students who will be graduating from the USF St. Petersburg campus this fall semester.

“Getting our degree together has made our foundation stronger and completing this goal together is really fulfilling,” said Michael.

They will both earn a bachelor of science degree in Finance. During their time on campus, they took many of the same classes and credit the professors and staff from the Kate Tiedemann School of Business and Finance for guiding them to graduation day.

“Honestly, we are here today because of Julie Harding in advising,” said Jacqueline. “She always took extra time, going out of her way to compare both our schedules and then fit in classes that we could both take together, which really kept us on track.”

Along with Harding, the advising coordinator for the Kate Tiedemann School of Business and Finance, Michael said Academic Advisor Jill Brown prepared him for getting a job after college by helping develop his resume and cover letter as well as prep for job interviews.

They both chose St. Petersburg because they wanted the more personal touch and close community feel offered by the smaller campus.

Now they plan to use their degrees to pursue careers in finance and management. Michael has been accepted into Geico’s management development program for the claims department while Jacqueline hopes to continue her work with the Darden Restaurant company, who operate chains such as LongHorn Steakhouse, Olive Garden and Bahama Breeze, in a managerial role.

The couple said earning their degrees brought them closer, which they believe will prepare them for future challenges in their married life.

“It was a struggle to save money for college during these years, impacting day-to-day decisions for our college tuition,” said Jacqueline. “We know now we will have a better life and can hopefully save for a bigger house.”

“I’m proud that we took more time to save and that we are graduating with a clean slate financially,” said Michael. “I think that will propel us to start a family and enter our next phase together.”

Asked if he would have done anything differently, Michael had one definitive answer.

“Looking back, I wished I asked her to marry me sooner.”