Learning the art and science of politics on the campaign trail 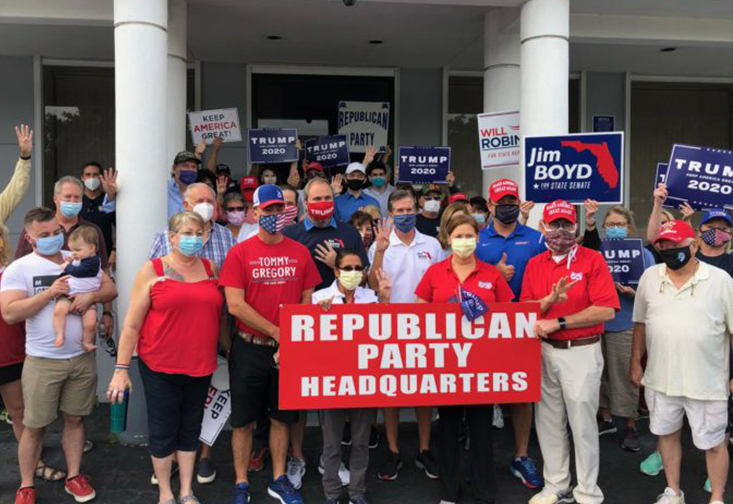 To learn about the art of politics, there is no better teacher than the campaign trail.

This year, every student in Professor Judithanne Scourfield McLauchlan’s practical politics course is working on a campaign, 19 in all, where they are interning for races ranging from the U.S. presidency to local school boards.

“That is a record for me, to have that many campaigns represented in one class,” said McLauchlan, an associate professor of political science at USF’s St. Petersburg campus. “And I’m excited about how eager the students are to learn and get involved, as this class is about the real-world experience of a political campaign and how to win an election.”

The practical politics course teaches aspiring campaign managers, political consultants and even future politicians about campaign strategy, grassroots organization, financing, messaging and polling. After learning about the candidates during the Campaign Internship and Volunteer Fair that McLauchlan organizes, students pick the candidates they want to intern for, shadow the activities of campaign managers and staff and organize to help get out the vote through phone and text banking, literature drops, surveys and more.

“If you are going to work for a campaign, you need to believe in the candidate and their policies and be excited about that campaign for it to be a worthwhile experience,” said McLauchlan.

Throughout the semester, students keep a journal to document and reflect on their experience and lessons learned. In class, students learn from each other, gaining insight on how each campaign is addressing issues such as voter turnout and campaign ads.

Overall, the goal is to learn how campaigns function, especially behind the scenes. A secondary benefit is students come away with a better understanding of the work of local and state government.

“It’s been very fast paced, a lot has to happen quickly and things change constantly,” said Johnette Williams, a political science major campaigning for Caprice Edmond, who is running for Pinellas County School Board District 7. “A really great aspect of the class is to hear different perspectives from students about their campaigns at all levels and what each is going through and trying to do to reach out to voters during the pandemic.”

Student Johnette Williams is campaigning for Caprice Edmond, who is running for Pinellas County School Board District 7.

All campaigns are hectic, but 2020 has been unlike any other year because of the coronavirus pandemic. It has resulted in campaigns having to change essential functions of their operations, shifting large campaign rallies with supporters and in-person interactions with voters to virtual gatherings. Engagement is largely done by phone, video conferencing and text messaging.

“I wanted to be a part of this campaign because I wanted to see how a presidential campaign would be able to cope with the pandemic and it being so different engaging with voters,” said Lauren Lewchuk, who is working on Vice President Joe Biden’s campaign, the Democratic Party nominee for President. “I have been making a lot of phone calls and texting so far. Believe it or not, a lot of people reply back and seem genuinely interested in wanting to learn more.”

While some students are political science majors who dream of being president or working on national campaigns one day, others in the class just wanted to know what it is like running for office. For Tim Abakhin, a recent transfer student, the course and internship experience offered a chance to dip his toe into politics.

“I never thought much about politics, but I have been wanting to do something that is impactful and I believe having a better concept of politics was needed,” said Abakhin, who is working on State Senator Joe Gruters (R-Sarasota) campaign. “I have spent a lot of time shadowing the candidate, meeting and talking with people and spreading the ideas of this campaign.”

The campaign trail is teaching students about the major political issues of the day and how to communicate those issues to different audiences and in a variety of ways, from in-person, but at a distance, to virtual. The students say their experiences have given them confidence engaging with voters, a better knowledge of the inner workings of a campaign and how political science is applied during an election.

“I was pretty terrified about phone banking. I have never done it before, but it’s been really rewarding to hear people say they like what they hear or thank us for what we are doing,” said Williams.

Lauren Lewchuk, who is working on Vice President Joe Biden’s campaign, is helping to organize volunteers and mobilize voters.

“They upgraded me to be a volunteer training captain, so I’m training volunteers every day now while learning about the hierarchy that comes with a national campaign. It is such a big operation,” explained Lewchuk.

“This experience has opened up doors and options for me, and it’s great to learn concepts in class and then see how they are applied in the real world through a campaign and a professional politician,” added Abahkin.

McLauchlan first taught the practical politics course in the summer of 2009, where students worked on local municipal races in St. Petersburg. Over the years, the class has grown while campaigns and candidates change, but the behind-the-scenes lessons about campaign management remain similar.

This year added a new twist. McLauchlan said she couldn’t be prouder of the students’ resiliency, campaigning and trying to win an election during a pandemic.

“2020 has been unprecedented in so many ways, including offering an extraordinary learning experience in terms of strengthening one’s resiliency and how to overcome challenges,” she said. “I have been really uplifted by so many students interested in taking this course and working in these races, knowing they can influence the political system and accomplish goals by electing leaders to positions that impact society.”