From Oprah to Opera: The Journey of Historian Raymond Arsenault’s Book “Freedom Riders” 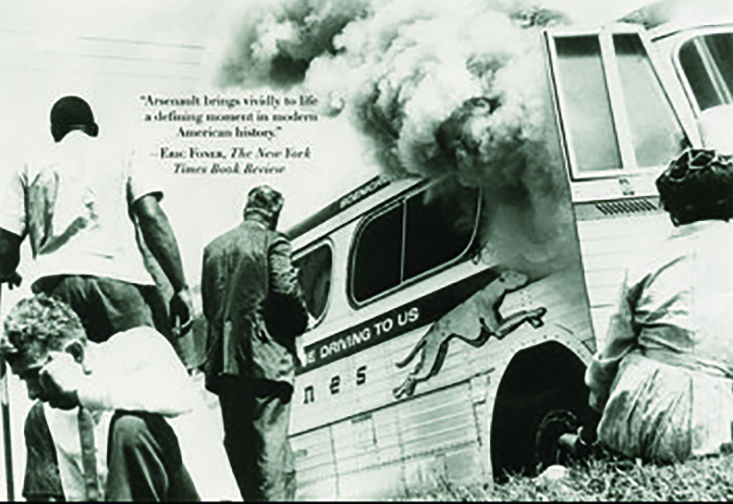 Arsenault spent nearly eight years researching the events of 1961 and interviewing more than 200 individuals who took part in the rides, which led to the publication of “Freedom Riders: 1961 and the Struggle for Racial Justice” in 2006.

The acclaimed book “Freedom Riders: 1961 and the Struggle for Racial Justice” by USF St. Petersburg historian Raymond Arsenault, which was the basis for a PBS documentary that won three Emmy Awards, has now played a part in an opera.

The world premiere of the opera “Freedom Ride” takes place on Saturday, February 8 in Chicago and will run for three nights. It is performed by the Chicago Opera Theater. Based in the summer of 1961, Freedom Ride tells the story of the fictional character Sylvie Davenport, an Xavier University student who joins the movement and becomes a committed champion of the cause. Eventually, she must choose between her academic future and continuing the fight to end segregation.

“When I first decided to write about the Freedom Riders, I found some great collections of brief first-hand accounts, including Library of America’s ‘Reporting Civil Rights’ anthology and Howell Raines’s ‘My Soul is Rested.’ But far and away the most useful and complete resource was Raymond Arsenault’s ‘Freedom Riders,’ which I picked up at the Birmingham Civil Rights Institute,” said Daniel Shore, the composer/librettist of “Freedom Ride.”

Shore added, “I drove from Birmingham to Boston, arriving just in time to turn on my TV and see the first airing of Stanley Nelson’s Freedom Riders documentary, based on Raymond’s book. It seemed like another clear sign that this was a story that needed to be told.”

On the opening night of the opera, Arsenault will be on hand along with around 20 Freedom Riders, who will be honored during the production.

“There are two things I never thought would happen in my career, that I would be on Oprah and that my book would help in some way develop a beautiful opera,” said Arsenault, who is the John Hope Franklin Professor of Southern History and appeared on Winfrey’s talk show in 2011 for the 50th anniversary of the Freedom Rides.

The Freedom Rides took place in 1961, where hundreds of civil rights activists – black and white, male and female, students and clergy – assembled on buses and trains and headed into the Deep South to fight against the segregation of interstate travel. They faced immense resistance and violence; one of the buses was firebombed, some activists were beaten and arrested.

“It was a daring, daring strategy to confront Jim Crow and segregation head on,” said Arsenault. “It was very interracial, a quarter of the riders were women, half came from the South while another half from outside the south, and some were religious while others secular. What tied them all together was a dual commitment to nonviolence and civil rights.”

The movement and the opposition it aroused caught the nation’s attention, including the Kennedy Administration. Eventually, the Freedom Riders forced the federal government to take a stand on behalf of civil rights and to enforce the national laws on interstate travel in the south. The example of courage set by these mostly young Americans would launch a wave of civil right protests and reforms that characterized the 1960s, and influenced the anti-war, environmental and feminist movements that came after.

Though a pivotal moment in American history, the whole story was never tackled in detail and the Freedom Riders were somewhat forgotten until Arsenault began his research.

“Nobody else had done a book. Like most historians I knew about the first ride that included 13 people and was attacked in Birmingham and Anniston, but little about the rides and the hundreds of riders who came after,” he explained.

The book became a much bigger project, and sensation, than Arsenault could have ever imagined. He spent nearly eight years researching the events of 1961 and interviewing more than 200 individuals who took part in the rides, which led to the publication of “Freedom Riders” in 2006. It went on to be named one of the best books of 2006 by The Washington Post and an Editor’s Choice by The New York Times.

In 2011, PBS American Experience produced a feature-length documentary based on the book, which went on to win three Emmys and a George Peabody award, become part of the National Endowment for the Humanities’ We the People project and landed Arsenault a seat on Oprah’s couch along with several freedom riders to celebrate the 50th anniversary.

When asked why the story of the Freedom Riders continues to resonate today, Arsenault, who during the course of writing the book and helping to make the documentary met nearly every Freedom Rider, explained it was their courage in the face of hostile resistance and insurmountable odds.

“They believed in something so deeply that they were willing to die for it. They were not going to leave something as important as civil rights for the next generation to deal with,” he said.