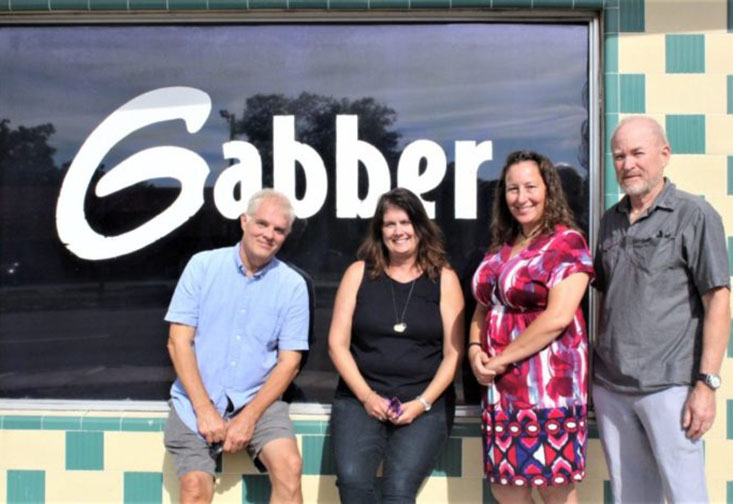 Cathy Salustri has covered a lot of strange stories for Gulfport’s Gabber Newspaper, but the one about Gordan the goat, who wandered into a St. Beach Beach bar after an alleged kidnapping, stands out from the rest.

“So This Goat Walks Into a Bar,” her headline read.

The Gabber – with unique stories such as Gordan the goat – holds a special place in Salustri’s heart. She first started writing for the hyperlocal paper in 2003, shortly after she moved to Gulfport. Now, she’s its new owner.

In late March, the Gabber’s former owners announced they would shutter the paper due to the economic impact of the coronavirus shutdown. Salustri, who earned a master’s degree in liberal arts at USF’s St. Petersburg campus, wrote an opinion piece in the Tampa Bay Times detailing what would be lost when the Gabber was gone. Readers shared in her grief, writing letters to Salustri bemoaning the paper’s demise.

“The Gabber has been such a fabric of the Gulfport community,” Salustri says. “Even though I hadn’t worked for the paper in five years, it really bothered me when I heard it was closing.”

Inspired in part by encouragement from the community, Salustri began discussing the possibility of purchasing the Gabber from its former owners. In May, it was announced that Salustri planned to buy the paper with Barry Loper, her business partner and husband. They set up a crowdfunding campaign, which raised $8,600, and sold advertising gift cards for people who wanted to support the paper’s return to print. The deal was confirmed by the end of June, and the Gabber will return to print on July 9.

“I wasn’t looking to buy a newspaper,” Salustri says. “I still have a successful career writing and speaking about Florida. It’s not like I was unhappy or looking for a change.”

Salustri decided to take on the challenge of resurrecting the Gabber in part as a service to the Gulfport community. And she credits the community with the paper’s return.

“It was because of the community that we were able to bring the Gabber back,” she says.

From city council meetings to goat kidnappings, the Gabber has covered news pertinent to Gulfport since 1968, circulating some 10,000 copies every Thursday. The paper will continue telling the hyperlocal stories it is known for, but Salustri said she has also begun to introduce some changes to revitalize the Gabber. Some of the biggest changes concern how the paper will cover local events – reporting on them before they occur, rather than after the fact, as the paper used to do. The goal is to give people across south Pinellas County reasons to visit Gulfport.

“We will be able to focus intensely on what’s happening in south Pinellas,” Salustri says.

Salustri has also started to expand the Gabber’s digital presence, redesigning the website, developing a weekly newsletter and using more social media. She has hired a couple local journalists, who previously lost their jobs due to media layoffs, and is seeking submissions from local freelancers who want to help keep hyperlocal news alive.

“When you talk about newspapers in a smaller town, there’s a difference between what we do and what daily papers or alt-weeklies do,” Salustri says. “We’re a microscope of a small community. We’re a voice for the community. A hyperlocal paper like ours is the only one that will care as much about the community as the community cares about it.”