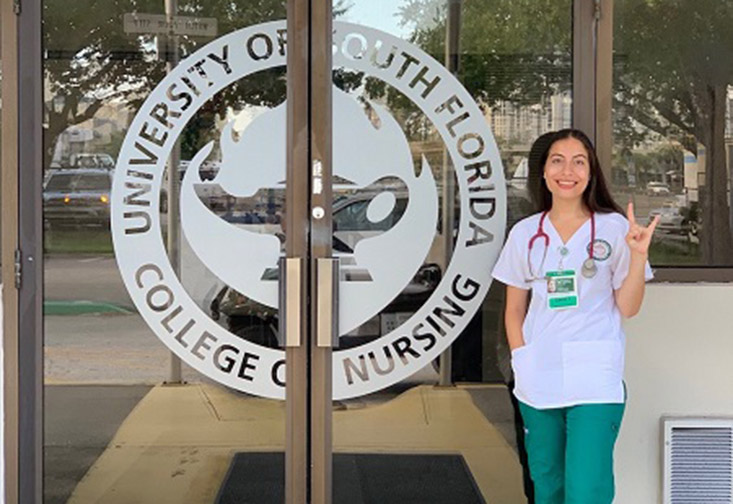 Victoria Hernandez, 22, of Palm Bay, FL, is one of 20 students in an inaugural USF College of Nursing program hosted at USF St. Petersburg.

Since she was old enough to remember, Victoria Hernandez loved science and wanted to be in the medical field. When she became an undergraduate student at USF St. Petersburg in 2015, she majored in biology and started volunteering during her junior year at Johns Hopkins All Children’s Hospital.

“I liked how the nurses helped people at the hospital,” said Hernandez. Through that experience, she set her sights on becoming one.

Last spring, Hernandez graduated from USF St. Petersburg and applied to USF’s College of Nursing in Tampa, which has an accelerated program for students who already have a bachelor’s degree.

“I got accepted but really wanted to start right away,” she said. So she contacted the program advisor who told her she was in luck: USF St. Petersburg would begin offering the accelerated nursing program in the fall.

“When I found out they were going to have the program in St. Petersburg, of course I wanted to go here,” she said. “This is where I got my undergrad and I was really happy.” 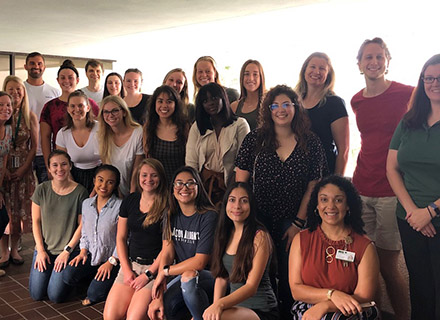 The new nursing facility in St. Petersburg in in the former Marine Exploration City, which USF St. Petersburg was able to lease for two years, thanks to a deal with the city. Beds with medical mannequins line both walls with student seating in the middle.

USF’s Accelerated Second Degree Nursing program kicked off in Fall 2019 with an inaugural cohort of 20 students. They come to the program from a variety of institutions, including USF in Tampa, Florida State University and the University of Florida, and with majors such as chemistry, biology, anthropology and even journalism.

He added that he felt optimistic more programs would follow. “We’re excited for the program to grow and for additional opportunities for new programs.”

“We are so proud to have expanded the nursing program to USF St. Petersburg,” said Victoria L. Rich, PhD, RN, FAAN, dean of the USF College of Nursing and senior associate vice president of USF Health. “This program is a wonderful opportunity for students who want to become nurses and serve their communities.”

The accelerated nursing program takes four semesters or 16 months to complete, with classes four days a week. Hernandez says she and her colleagues have become good friends. “We are spending all day, practically every day together,” she said. “We will do clinicals together and these are probably my future co-workers.”

She’s referring to clinical rotations in area hospitals, including St. Anthony’s, Bayfront, and Johns Hopkins All Children’s. The rotations include 10-hour shifts, which Hernandez says prepares them for the 12-hour shifts nurses routinely work.

Though Hernandez moved to USF St. Petersburg from Palm Bay, on Florida’s east coast, she says that she definitely wants to stay and work in St. Petersburg. “My goal is to work at Johns Hopkins All Children’s Hospital. I’m really excited for the rotation there next semester. I’m going to give it my 100 percent.”