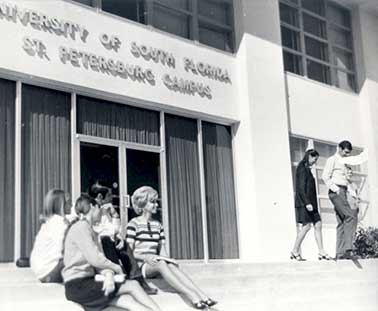 USF's St. Petersburg campus has a rich history of academic excellence, entrepreneurial spirit and ingenuity. Its founders opened the doors to students on September 5, 1965, and throughout its history this academic cove on Bayboro Harbor has embraced enormous change as Florida’s need for higher education expanded.

The first classes began for 260 freshmen on September 7, 1965 in the old Maritime Service barracks. Buses shuttled students between their classes in St. Petersburg and Tampa.

In the late 1960s, USF president John Allen devised a plan to offer commuter students access to upper-level undergraduate and limited graduate programs, under the name Bayboro Campus. He put Lester Tuttle, a College of Education faculty member, in charge of the plan. Florida lawmakers made it an official branch campus in 1969. By the mid-1970s, the campus offered a variety of upper-level undergraduate and some graduate courses.

Nelson Poynter participated in a groundbreaking for a greatly expanded campus on June 15, 1978. The USF St. Petersburg campus library is named in his honor. The campus continued to grow through the 1980s, with new buildings and increased course offerings.

The campus’s first residence hall broke ground in 2005. In 2006, USF St. Petersburg campus was awarded separate accreditation by the Southern Association of College and Schools. Under the leadership of regional chancellor Margaret Sullivan, the accreditation was reaffirmed in 2011.

In 2014, the college of business was named for local businesswoman and entrepreneur Kate Tiedemann, who donated $10 million to support education and research, including a faculty endowment fund. ​This donation was the largest gift in the campus' history. In 2017, the college got a new home with the opening of Lynn Pippenger Hall, named for longtime St. Petersburg resident and former Raymond James executive Lynn Pippenger, who donated $5 million in 2016.

In March 2018, Florida Governor Rick Scott signed the Florida Excellence in Higher Education Act of 2018, requiring the University of South Florida Tampa, USF St. Petersburg and USF Sarasota-Manatee campuses to consolidate accreditations under one umbrella.  Lawmakers believed a single, unified accreditation would elevate the success of all students and faculty, providing more academic programs for students and resources for research and education on each of the campuses. The law also accounted for key measures that will uphold the distinctiveness of each campus, its leadership and budget while providing transparent accountability across the entire university and its campuses.

The move to a single accreditation was approved in June 2020 by the executive council of the Southern Association of Colleges and Schools Commission on Colleges (SACSCOC), the regional accrediting agency that oversees higher education in the southern United States. 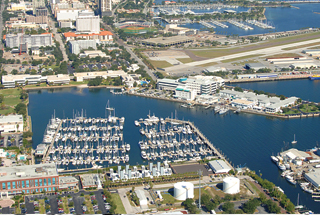 In November 1939, much of the area south of the campus’ swimming pool became the U.S. Maritime Service Training Station (USMSTS).

World War II transformed Florida. More than 120,000 members of the U.S. Army Air Corps (now the U.S. Air Force) came to Pinellas County to train for military service. While those cadets trained elsewhere, the USMSTS base prepared another group of recruits for the job of protecting ships traveling across the open seas. Maritime recruits gained skills in seamanship and boating operations.

The nearly 25,000 recruits who trained at the Maritime Base before its closure in March 1950 played an important role in protecting convoys and delivering supplies during WWII. A cooks and bakers school even opened in December 1942 to offer recruits a chance to gain skills needed during their duty on the open seas.

On National Maritime Day in 1945, a cenotaph was placed at the tip of Bayboro Honor to recognize the service of those who had served and perished during WWII. This memorial is a solemn spot that marks an earlier chapter of the campus’ history.