The College of Arts and Sciences offers a B.S. in Political Science on the St. Petersburg campus.

View more information about options on the USF Tampa campus.

The Political Science program at USF's St. Petersburg campus prepares students for successful careers in a rapidly globalizing world. The program's emphasis is on examining fundamental political science questions, including how nations struggle over power and wealth; how political communities reconcile claims of liberty, authority and justice; and how governments and societies produce the laws and policies that influence our lives. 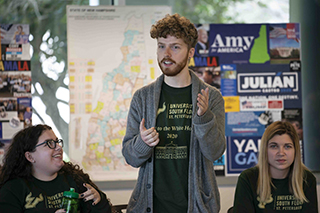 Demonstrating a global perspective, the Political Science program faculty have a particular interest in human rights, civil rights and international relations. Motivated students are encouraged to participate in faculty research on topics such as U.S. Supreme Court decisions, the European Court of Human Rights, wartime destruction of cities and environmental policies in Latin America. In addition, strong partnerships with the Florida Holocaust Museum, the League of Women Voters and the St. Petersburg Conference on World Affairs give students the opportunities to apply their skills in the community.

Students in the Political Science program have secured internships with the U.S. House of Representatives, the Urban League, the State Attorney's Office, the U.S. Department of State, the Public Defender's Office, and a variety of NGOs and campaigns ranging from school board to U.S. president.

Graduates of the Political Science program have gone on to professional school placements at institutions such as Notre Dame University, the University of Michigan, George Washington University and the University of Virginia. Graduates have also taken jobs with interest groups in Tallahassee, in the U.S. Congress, the U.S. Department of State and the U.S. Agency for International Development.

REQUIREMENTS FOR A DEGREE IN POLITICAL SCIENCE

Always refer to the Undergraduate Catalog for degree requirements. Students will typically begin progress toward the major by taking at least one course from the major core, as these often serve as prerequisites for the electives. Students are urged to consult with their advisors to create the most beneficial set of courses.

For questions about this program, contact an Academic Advisor.