Covering the Protests: Alum Martha Asencio Rhine Reflects on Being a Photojournalist During an Historic Time 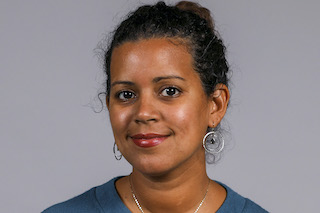 As mass protests gripped the Tampa Bay area, Martha Asencio Rhine strapped on her camera and entered the fray, determined to capture the historic scenes unfolding throughout the region.

Sparked by the tragic death of George Floyd by a Minneapolis police officer, tens of thousands of people have taken to the streets to protest police violence and racism, demanding accountability and change.

Ascencio Rhine has covered sporting events, political rallies and music festivals for the Tampa Bay Times over the last two years, but has never seen intensity, sadness and even danger like she experienced since the protests began.

“These protests sort of take on a mind of their own,” she said.

We talked with Asencio Rhine, who graduated from USF St. Petersburg in 2019, to learn more about how she prepares to cover the protests, what she looks for when documenting such a historic moment and her passion for photojournalism and images “that spark conversations.” This interview has been edited for length.

How challenging is it covering these protests compared to typical stories and why?

Very challenging for many reasons, but the most apparent thing for me was the anxiety you feel. The first protest I covered was in St. Petersburg and it seemed like a regular rally to me. But across the bay that night were the fires and burnings that happened in Tampa and it was pretty scary to see, knowing colleagues were covering it.

The next day I had to go to Tampa to cover the protests and I was afraid I was going to get caught up in this mob scenario. I knew I would be somewhat alone. I’m a woman and I was afraid someone might try and steal my equipment or that I might get hurt or arrested. These were things we (journalists) talked about going into the protest. In addition, finding bathrooms and parking spots has been challenging and there is really no way to carry all the things I need to be out there for a full day such as water, food and sunscreen. Running out of water mid-march has been a big challenge.

What have you learned about the protests from being there?

The main thing I’ve learned is that the organizers have a vision for how things should go, but ultimately, with passions running so high, it is hard to keep things under control. They sort of take on a mind of their own. After a couple of weeks, the people still out there seem to mean business and their consistency has resulted in peaceful demonstrations that are also more organized and focused.

I have seen people getting sprayed in the face, having smoke bombs thrown at them. Protesters seem to react to how the police act. Instances where police kept their distance, where they gave protesters space, were peaceful. But when they were present in riot gear, the protesters reacted negatively.

How do you cope with going into a situation that could be dangerous?

Honestly, I just say to myself ‘you have to, you have to, you have to.’ And I know I don’t have to, but it is a point of pride. I’m the only woman on the photo staff besides the videographer, and I didn’t want to be the one who was scared. I had something to prove. I’m also a woman of color, so it would be a lie to say I am completely separated from their cause. But my job is to cover this event objectively and fairly and I had many female photographers around the country who I look up to who provided me brave examples.

What are you looking for when documenting these protests, what are you hoping to capture?

I am looking for the scope of emotions. I want to see the hurt, the sorrow, the anger, the fear. I want to take pictures that make you feel. When I go into a situation, I always keep three things in mind: establish a sense of place that shows where we are and what is happening; then get closer to make out people’s faces; and then I capture the details, a close up of a hand for example, or eyes. After that, I just want to be creative and capture the feeling of the moment aside from showing people what is technically happening.

What is your favorite image that you captured of this moment in history?

The one that has gotten the most reaction has been of these little girls on their front porch with their fists in the air. I heard so much from others about that photo. A congresswoman shared it even and it has really resonated with a lot of people. There is an innocence with that photo, kind of hopeful and kind of sad. I think it’s because I realize what world they’ll be up against.

You were a non-traditional student, going to college in your 30s. What is it about photography and journalism that drew you in and made you want to pursue this profession at that stage in your life?

I have always loved photography. For nearly a decade in my 20s I worked a job in a doctor’s office until eventually I decided it was time to pursue this passion of mine. I had experience doing some family photography but it didn’t feel satisfying. Looking at my favorite photographs around my house, what they had in common was they were done by photojournalists. They had a news component and they were gripping and artistic and made you feel something. They spark conversations. 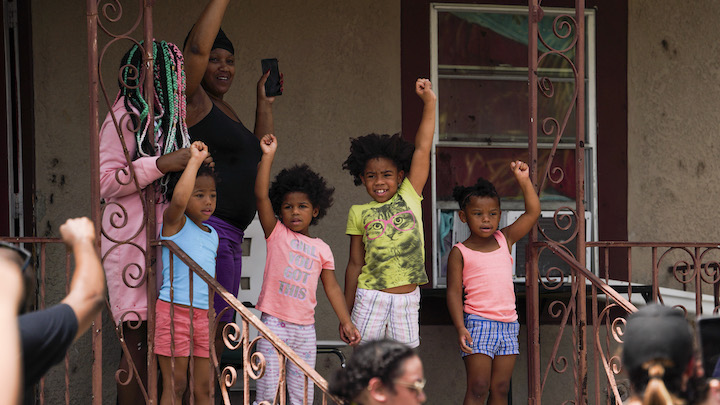 Ascenio-Rhine’s favorite image that she captured so far is this one of a group of young girls raising their fists in support as hundreds of people participate in a march by their home. Photo by Martha Asencio-Rhine, Tampa Bay Times.